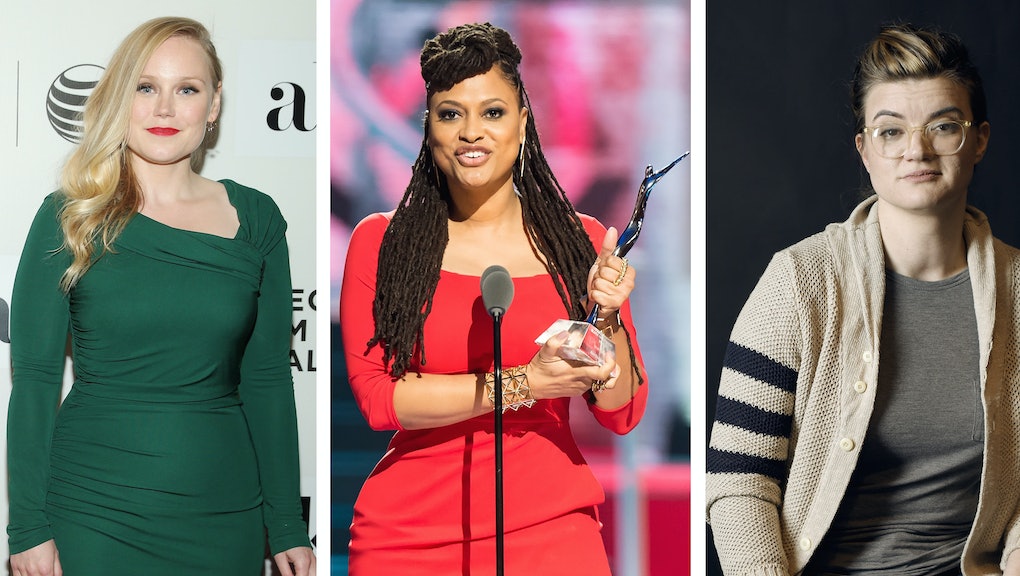 In One Quote, This Director Nails Why a Filmmaker's Gender Doesn't Matter

Pamela Romanowsky's The Adderall Diaries seems like a boy movie. Its core relationship is between father and son, and most of the female characters exist to serve solely the male protagonist. Notably, it does not pass the Bechdel Test: Two women never talk to one another about anything besides a man.

This seems strange. How could a female writer and director put together a film so directed at men? Yet when asked about the choice of subject material in an interview with Mic during the Tribeca Film Festival, Romanowsky had the perfect response.

The sentiment is simple — of course a female director isn't always making a girl movie for an audience of women — but deceptively complex. Though things have gotten better for female filmmakers, including promoting women like Kathryn Bigelow and Ava DuVernay with plaudits and awards, there's much work to be done.

The film industry remains quite unkind to female directors. A just-released study from the Female Filmmakers Initiative (founded by the Sundance Institute in collaboration with Women In Film, Los Angeles) found the Hollywood studio system is still biased against women. That's unsurprising, considering only 4.7% of major studio films made between 2009 and 2013 were directed by women.

More shocking: The independent film world isn't much friendlier. Just 10% of independent films from the same period were directed by women. It hasn't miraculously gotten better in the year since, either. Only 7% of films released in 2014 were helmed by female filmmakers.

At Tribeca, the situation is mildly better. Of the 125 directors who helmed feature-length films at the festival, 26% are female. That's an improvement for sure, but still a great distance away from equity.

There are success stories, especially at a festival like Tribeca. Leslye Headland's Sleeping With Other People, which premiered at Sundance Film Festival and was picked up for distribution by IFC Films, is a bright, intelligent take on the romantic comedy that balances male and female perspectives beautifully. The heartwarming documentary In My Father's House, also about a father and son relationship, was directed by not one but two women: Ricki Stern and Anne Sundberg.

Then, of course, there's Golden Globe nominee Ava DuVernay. After a phenomenal year that saw widespread acclaim for her excellent film Selma, DuVernay is pushing forward with her work. It's an uphill battle for a woman of color, but as she described during a Tribeca Talk Wednesday afternoon, it can be done. It just requires an incredible amount of determination.

The world of female filmmakers must continue to grow. It will require consumers of movies to toss of expectations of what a "girl movie" and "boy movie" are. It will require studios to take a chance on new voices and nontraditional narratives. Most of all, it will require perseverant women unwilling to take no for an answer. Luckily, with women like Romanowsky and DuVernay working, that goal seems closer every day.

"I just don't embrace the whole 'men' thing being a block for me. How's anybody gonna stop me from making my movie?" DuVernay said. "It's not possible that you can stop me. It's not possible."