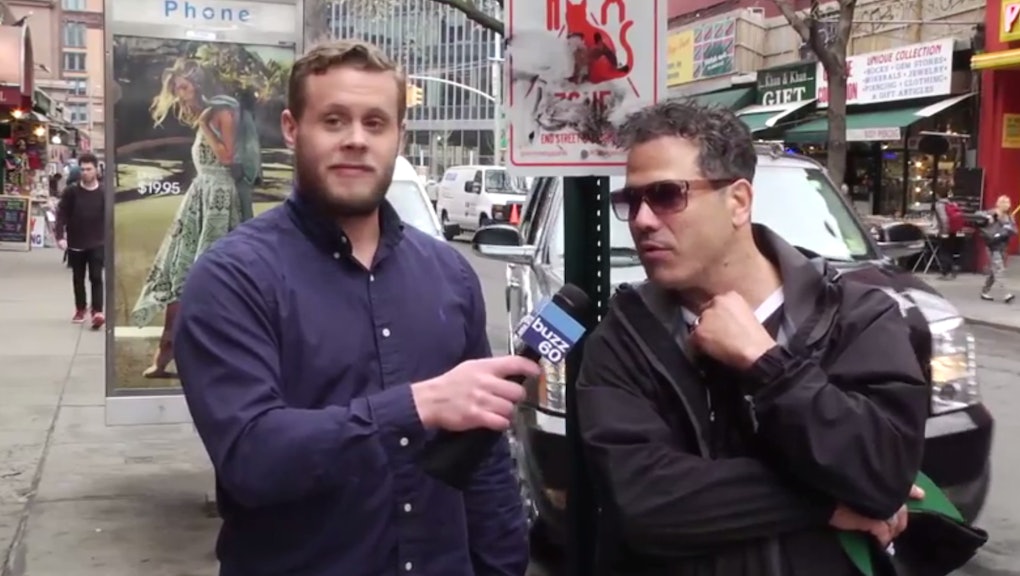 Meet the Most Obnoxious Catcaller in New York City

New York's most oblivious street harasser found himself in the middle of an anti-catcalling news segment being filmed on the streets of the city — and unaware that the video clip was actually against street harassment, proceeded to act as an object lesson in sexism on tape.

Buzz60 host Patrick Jones was covering a story on anti-catcalling signs being erected around the city by non-profit Feminist Apparel as part of the Anti-Street Harassment Week campaign when this man-on-the-street interview got real creepy, real quick:

Making a series of clicks, whistles and kiss noises at women as they walked by, the random street harasser seemed to have no qualms making himself the poster boy for why the signs were put up in the first place.

"How would you call a dog?" Jones asks. "Same way," the man responds.

"Wait a second," the man said as something clicked in his head. "Are you reporting is that girls don't like this?" "They don't like catcalling," Jones responded. "Get the fuck out of here," the surprised catcaller says. "I don't ... c'mon. We're just acknowledging that you did a good thing today getting out of bed," he adds while pointing at another woman.

On Twitter, Jones referred to the incident as the "craziest interview of my career" and insisted that it was "not a setup" - the man merely "overheard and felt strongly."

If the signs indicating street harassment happens all the time in the city weren't enough to convince you how common it is, then maybe this segment will. Catcallers: they really are everywhere, apparently.