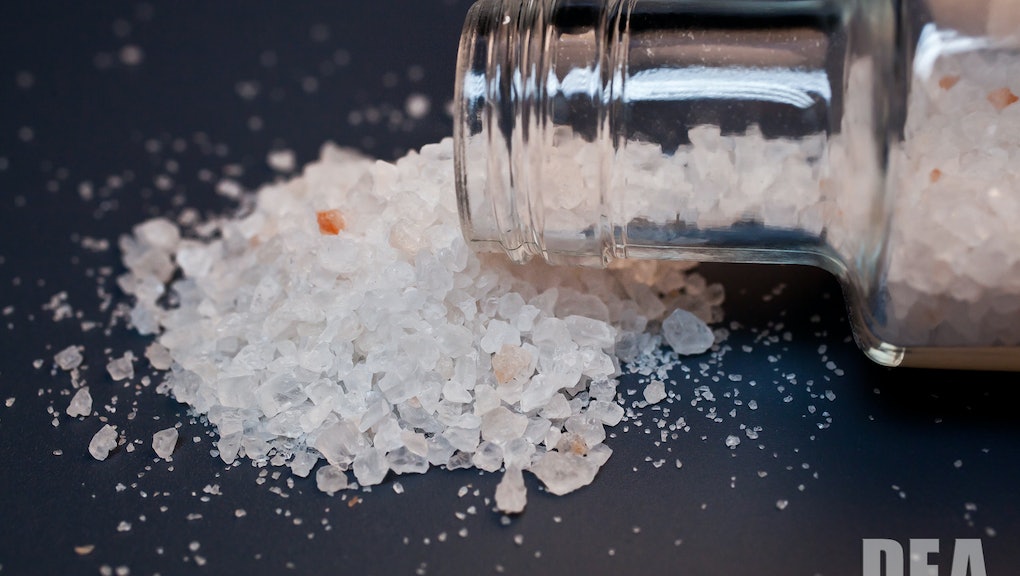 A spur of drug-related arrests in Florida has drawn panicked media reports like flies to honey. By now you may have heard about "flakka," a cheap designer drug being sold in the Sunshine State that has been linked to numerous incidents of property damage, violence and public nudity.

Relying heavily on law enforcement sources and the hint of mass civil disorder, reporting on flakka often resembles previous moral panics about drugs like krokodil and jenkem. Words like "superhuman strength" are thrown around rather carelessly.

Here's a sampling of some of the odder stories to flood out of Florida concerning this supposed flakka epidemic:

The New Times Broward-Palm Beach reported in February that a naked man who had climbed onto a roof while holding a handgun, threatening to use the gun on himself or others, appeared to be under the influence of flakka.

PIX11-TV reported earlier this month that a man later determined to be high on flakka was arrested in the parking lot of the Fort Lauderdale Police Department after attempting to break in through the front door. Det. Tracy Figone played up the "superhuman strength" angle in his statement to the TV station, saying: "His power was so forceful that, when he pulled, you could see the doors shaking, and him throwing the rocks that cracked the impact windows." According to KTVI, the man was attempting to get help after determining he was being chased by several cars.

Melbourne, Florida, police arrested a man in April who WKMG-TV reported "attacked a Brevard police officer after twice being shocked with a Taser while repeatedly saying he was God." The station also reported that he had committed "a sexual act on a tree."

In April, WTVJ reported on a story about a 34-year-old Fort Lauderdale man who went on a run wearing only his sneakers, later evading police on Broward Boulevard. Police claimed the man believed he was being chased by unknown assailants, and that he said he was running in the road "because if I got hit by a car they would stop chasing me."

5. Man on Flakka Impales Self on Fence

This one is a little more painful: in March, WTSP-TV reported on a man who had impaled himself on a foot-long spike on a police parking lot fence after attempting to escape from custody. According to WFOR-TV, rescue crews had to use a circular saw to extricate the man while he remained perfectly still to avoid severing a major artery. To the flakka user's credit, he appears to have done a pretty good job of getting up the fence in the first place.

What's going on here: According to LiveScience's Tia Ghose, flakka is known to scientists as alpha-PVP, or alpha-pyrrolidinovalerophenone. It is a form of synthetic cathinone, a category that also includes the much-discussed bath salts that supposedly ravaged Florida in 2012 (remember the guy who ate a homeless man's face?). At low doses, Ghose writes, the drug acts as a stimulant with "mild hallucinatory effects." But since an active dose of flakka is extremely small at just 0.1 grams, even a small error can result in the user absorbing much more than they bargained for, especially since it can be ingested in numerous  ways.

At high doses, Nova Southeastern University epidemiologist James Hall told LiveScience, users think incoherently, their body temperature rises to up to 105 degrees Fahrenheit, and it triggers the fight-or-flight response, possibly causing violent behavior. All of this often occurs while the user is hallucinating. According to Hall's research, the number of such incidents is indeed rising, and 126 deaths were reported in 2013 in Florida as caused by any type of synthetic cathinone.

So flakka is indeed a potential public health risk, much in the same way synthetic cannabinoids marketed using names like K2 or Spice have been linked to serious side effects requiring hospitalization. But drug law reform advocates insist that the dangers are exaggerated.

"The way the flakka story has been reported in most mainstream media sadly follows the typical 'drug panic' narrative: focus on extreme cases involving strange behavior or violence while failing to report any other circumstances of use like dose levels or the way the drug has been taken, which can greatly impact its effects," Stefanie Jones, Drug Policy Alliance nightlife community engagement manager, told Mic via email. "This feeds existing paranoias and stereotypes about drug use and leads to knee-jerk type reactions from the public."

"Left totally unaddressed is the fact that outlawing similar drugs is exactly the action that has brought these new substances to the forefront. "We need to face the fact that simply making something illegal isn't solving issues related to drug use; in fact it's making them worse."