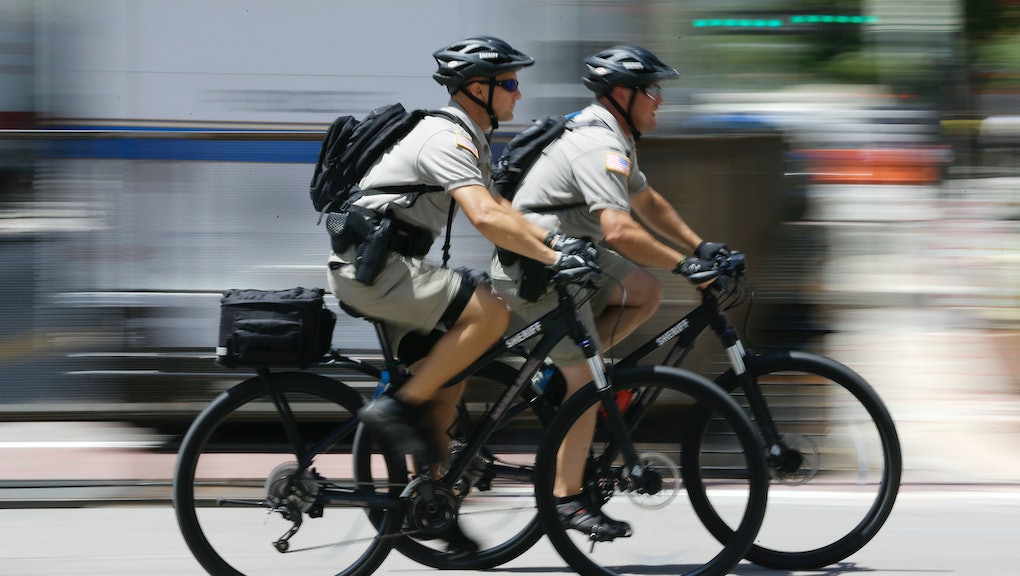 Better not bike while black in Tampa.

A Tampa Bay Times investigation has found the city's police officers are disproportionately "targeting poor, black neighborhoods with obscure subsections of a Florida statute that outlaws things most people have tried on a bike, like riding with no light or carrying a friend on the handlebars." The police department used violations of the statute as an excuse to "stop, question and search almost anyone on wheels."

Well, just so long as they're black. The newspaper analyzed over 10,000 citatons that Tampa Police Department officers have issued to bicyclists over the past 12 years and found that about 79% of the ticketed people were black. That's despite the fact that Tampa is roughly a quarter black, according to the newspaper's analysis. The Tampa Bay Times further found that 80% of the ticket stops resulted in no arrest, and when they did, "it was almost always for a small amount of drugs or a misdemeanor like trespassing."

This should sound pretty familiar: Racial profiling in the U.S. is nothing new, and neither is the police practice of targeting minority communities for minor offenses. In many instances, it's a pretext to issue costly fines or conduct invasive searches for contraband and drugs.

In Ferguson, Missouri, where unarmed 18-year-old black man Michael Brown was shot to death by police under disputed circumstances last year, the Department of Justice soon uncovered a culture of racial discrimination amid the town's police force that included beatings, indiscriminate deployment of police dogs on black suspects and disrespectful treatment by officers. Less dramatic but just as pernicious was a system of hefty fines and grossly disproportionate financial penalties for minor offenses enforced by the town's officers, mainly against poor, black residents.

In a highlight of the abuses, the Washington Post noted that Ferguson officers used arrest warrants as leverage to extract payments from residents, sent an African-American woman to jail for six days and fined her $1,000 for illegally parking her car, and even structured their entire department around generating revenue rather than promoting public safety.

As the Nation's Raven Rakia added, there's widespread evidence to demonstrate other police departments around the country routinely use similar tactics to generate funds for city government. Rakia cited many instances of minority residents facing stiff time in local and county lockups for failing to pay exorbitant fines dealt out for minor ticketable offenses, including a black man in DeKalb County, Georgia, who was fined $800 and put on probation for traffic violations and then sent to jail for "violating probation" when he couldn't immediately cover the cost.

Why you should care: The cost of racism can be measured in police shootings of unarmed black men and arrest rates, but it's also measured in dollars and invasion of privacy by countless others who are subject to racially discriminatory stops. When biking while black exposes people to unconstitutional searches and out-of-control fines, then it's hard to conclude that there isn't something sinister at work.

"If it's not racial profiling, what is it?" Joyce Hamilton Henry, advocacy director for Florida's arm of the American Civil Liberties Union, asked the Tampa Bay Times.

It's a good question.