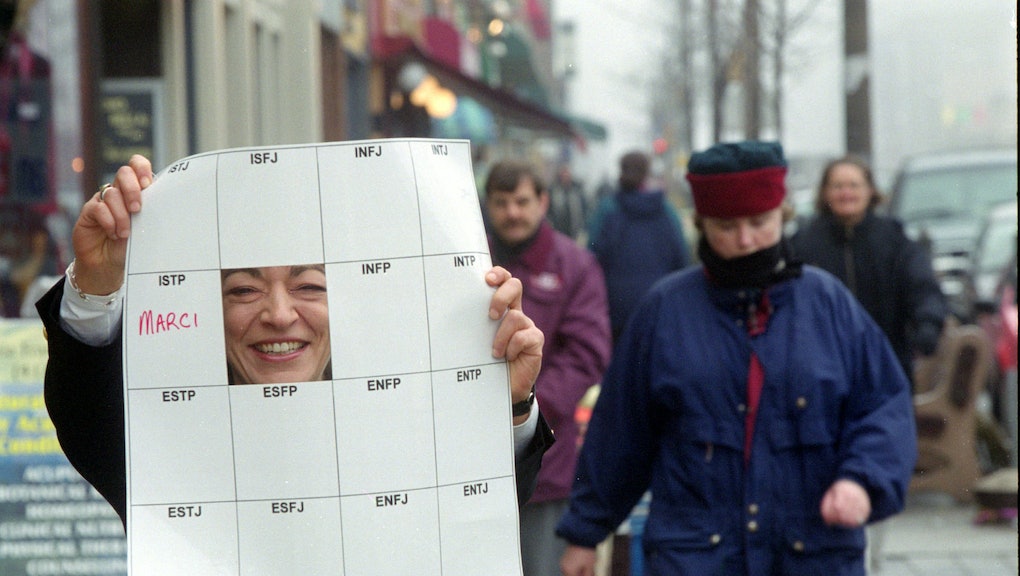 Study Reveals Which Myers-Briggs Personality Makes the Most Money

A lot of things matter when it comes to creating a successful career: privilege, ambition, education and connections, to name a few. But how about your personality?

A recent report from Truity Psychometrics purports to shed some light on how personality influences our careers — whether certain kinds of people make more money, why certain kinds of personalities tend to end up in that nice corner office, and so on. Using the world's most popular personality test, the Myers-Briggs TypeFinder, Truity surveyed a representative sample of 25,759 people about their personality and work history and compiled the results in an infographic-laden report.

In another poll, people with an ESFJ-type personality (Extraversion, Sensing, Feeling, Judging) came in first among rankings of job satisfaction, with introverts again coming in a little lower.

Finally, people with ENTJ-type personalities (Extraversion, Intuition, Thinking, Judging), commonly thought of as having an "executive" personality, tend to manage the most coworkers of all people in supervisory positions polled. Extroverts, unsurprisingly, do much better than introverts on this scale, though ISTJ (Introversion, Sensing, Thinking, Judging) people perform better than most.

Introverts may have lower incomes because they are less inclined to take managerial jobs, the authors suggest. They also concluded that self-reported work satisfaction does not always go up with markers of career success, a difference that "seems to boil down to the Thinking vs. Feeling dimension." Other traits, like lower scores in the Agreeable dimension, were linked with higher income.

(Take Truity's version of the test for free online here.)

Didn't find yourself high on the list? Don't be too disappointed or discouraged. Many psychiatrists think that the Myers-Briggs system isn't very scientific. The New York Times dubbed it "useless but wildly popular," while the Guardian notes that the test "seems to rely exclusively on binary choices," painting a "ridiculously limited and simplified view of human personality." The Guardian further warned that the test is commonly used by "HR departments, development/training teams and the like, who can often be clearly unaware of its limitations."

But according to the report, the clear disparities between certain personality types in the test results are solid evidence that the MBTI can provide interesting insight into workplace dynamics.

"When the average income for ENTJ types is over twice that of INTP types, it is hard to imagine that personality type is meaningless," the authors write.

"Why do some of us take the substantial risk to start our own businesses, while others wouldn't dream of leaving the security of a paycheck?" they ask. "Why do some new parents pause their careers to stay home with young children, while others can't imagine straying from the corporate climb? The answer seems to lie, at least in part, in our personality type."