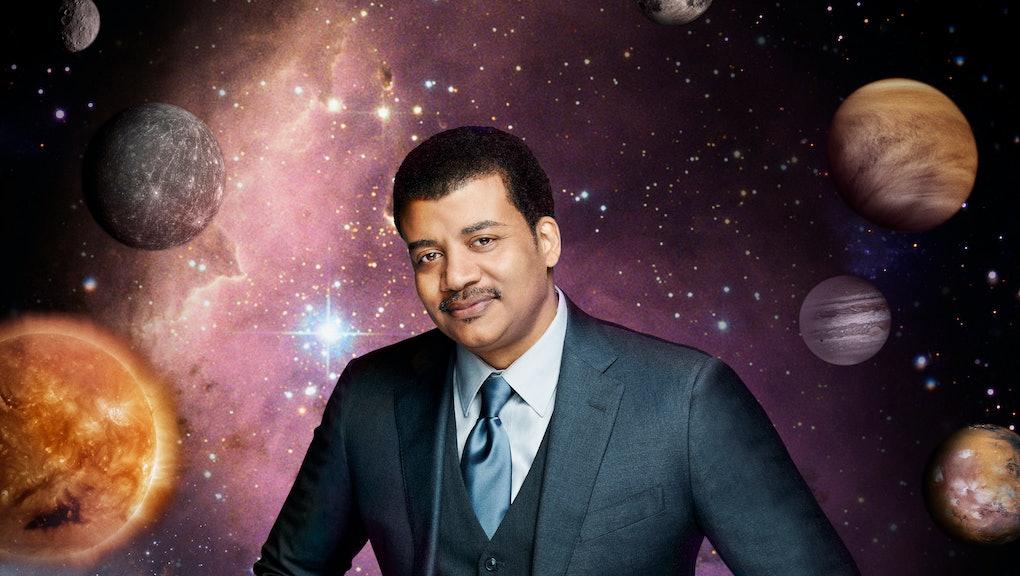 StarTalk, a podcast dressing up space and science in the velvet smoking jacket of pop culture, has been the pinnacle of science nonfiction audio since 2009. At its helm is Neil deGrasse Tyson, a Bronx-raised beacon of cosmic awareness in a world unconscionably filled with faux-science swill.

He was the smirking face of Cosmos: A Spacetime Odyssey, the 2014 sequel to Carl Sagan's 1980 Cosmos: A Personal Voyage, his second foray into television after Nova ScienceNow on PBS — to say nothing of the televised interviews in which he, without fail, manages to look cool as hell.

Beginning April 20, the next chapter begins: StarTalk will be televised on the National Geographic Channel. The first episode, with an interview with George Takei, is all about Star Trek. Tyson tells Mic about his plans for the show, his plans for another run of Cosmos and the universe — both known and otherwise.

Neil deGrasse Tyson: Nothing. Except I have to be better groomed because I'm being filmed, instead of being able to do this show in my pajamas.

The value of the TV, however, is that my cohosts, who are always comedians, are quite animated people. So when they share their humorous observations and witty quips, there's body language and facial expressions that now bring an extra dimension to the viewer experience. But like I said, what's different is I have to be groomed for this. That's not normally what I'd think of doing when I wake up in the morning.

Mic: I'm surprised the Esquire guys didn't ask you about what your grooming would include.

NDT: How could they leave that out? You know, 15 years ago when I was in People magazine, there were 12 people in 12 categories in the sexiest man alive issue. On the cover was Brad Pitt, but I was one of the 12 as "Sexiest Astrophysicist." There were stock questions, and one was "Who's your hairstylist?" [laughs] There's sexiest movie star, sexiest action hero, sexiest news anchor, categories that are highly competitive. "Sexiest Astrophysicist" had no such competition involved. But they asked me these stock questions about where I get my clothes fitted. They were talking to the wrong person.

Mic: The first episode, airing April 20, has George Takei. And Bill Nye is set to do some short pieces. Are those the level of recognizable guests you're going to have regularly?

NDT: Let me not think of level of guest but kind of guest. The kind of guest will be, in one case, people you've heard of, but would've had no idea how much geek lived within them. And the conversation I'll have with them will reveal this fact.

If there's anyone we interview that you haven't heard of, then they're on there because they have an extreme expertise in a subject. For example, one of my target guests for the next season is a physics professor named James Kakalios. You've probably never heard of him, but he wrote a book called The Physics of Superheroes. I'm expecting to have a conversation with him about where all the superheroes get their powers from.

By the way, NatGeo signed up for a second season [of StarTalk] 48 hours ago. We're very happy and proud of that. Even before the first episode aired. So that felt good.

Mic: What's wrong with how we, both as a society and our government bodies, approach space exploration today?

NDT: As an educator, it's incumbent upon me to share with the electorate the value of space exploration relative to the future health, wealth and security of the nation. If you hear that argument, and you still don't want to go to space, that's your prerogative, and you can vote for people who don't want to go into space. That's what it means to live in a free democracy. I don't have a problem with that as long as I can make my case for people.

Most people that I know who've heard the case find it compelling. Because while you're looking down saying, "I've got problems on Earth, why do I have to look up," an asteroid is going to come take you out. You want to be looking up long enough so you can deflect it before it happens. You have people fighting wars over fossil fuels buried beneath the soils across a line in the sand. Meanwhile the universe has limitless sources of energy. We fight wars over access to minerals, yet the universe has an unlimited source of minerals. So to say we're going to look down at Earth and that's the beginning and end of where we're going to solve our problems, that's a level of short-sightedness that in fact could be fatal to the survival of our species.

Mic: So it's less how we're approaching space specifically, it's that we're putting too much focus on the Earth and neglecting space?

NDT: It's that you're thinking Earth is the solution to all of your problems, without recognizing the likelihood that the exploration of space and planets and asteroids and comets and moons can be the actual repository of solutions to your problems.

Mic: What will happen in the journey to explore space in the next five years?

NDT: In the next five? I'd need 20 to 30 years. I think we'll know for sure whether there's life elsewhere in the solar system or not. That's a different statement from saying, "We think there's life, but we haven't found it yet so we don't know." I'm talking about active analysis of water-bearing regions in the solar system and judging whether they have life in them or not.

In the next five years, I couldn't tell ya. [When] you're talking about discoveries on planets, you're constrained by when you send the next probe there. There's no probe scheduled to go to Neptune in the foreseeable future. So no one is banking on a Neptunian discovery any time soon. But we do have plans to revisit the soils of Mars. There's also plans to visit Europa, one of Jupiter's moons, that has an ocean of water that's been liquid for billions of years.

Mic: If you had to bet $100 on predicting the first alien surface on which we discover life, what's your call?

NDT: I wouldn't say definitely. There's a risk of me losing. Otherwise I'd bet you more. [laughs] If there is life, that's great. But if there isn't life, I want to know why you can have an ocean for a billion years and not have life.

Mic: What's a mystery or a technology you hope we attain while you're alive?

NDT: Suborbital air travel, so I could get to Tokyo in 45 minutes from New York. We should've had that in the 1980s given the rate we were improving aviation and aeronautics.

Mic: Will there be another season of Cosmos?

NDT: There's nothing official announced, no one has greenlit anything yet, but we're in conversation. There's certainly room for it. The universe is vast, so there's no shortage of content. People have come up to me and asked, "Is there any content left to put in another 13 episodes?" And I said if you can have years of watching Kim Kardashian, we can fill two seasons of 13 episodes of Cosmos. Because we're drawing upon the entire universe for our content, not the social and sex and financial life of people in reality shows.