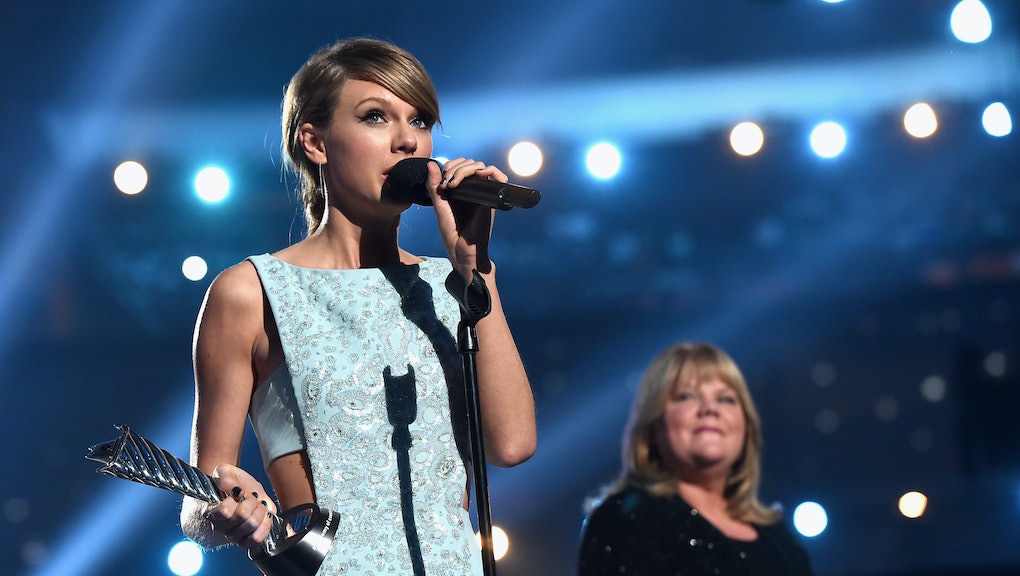 After the monumental pop success of Taylor Swift's multi platinum 1989, it's easy to forget that the singer was once first and foremost a country musician. But she hasn't forgotten at all.

On Sunday night, the Academy of Country Music Awards celebrated its 50th anniversary by giving Milestone awards to some biggest names in country, including Swift. Swift's mother, Andrea Swift, presented the award, and Taylor accepted it with grace, thanking the country community for their continued support. It was a powerful moment — a sign that even after her massive pop success, Taylor Swift still knows where her home is.

Country beginnings. "I'm so happy that I learned to write songs in a town like Nashville," Swift told the crowd of screeching fans. She began working the Nashville country circuit when she was 14 years old. After school, she would work under the tutelage of legendary country songwriters like Troy Verges, Brett James, and the Warren Brothers, before creating a lasting songwriting partnership with Liz Rose.

"Basically, I was just her editor," Rose said in an early interview with Blender about working with the young Swift. "She had such a clear vision of what she was trying to say. And she'd come in with the most incredible hooks." Together they wrote Swift's first hit, named "Tim McGraw" after the cowboy country singer, full of twangy vocals and meandering acoustic guitars.

Swift performed the song on the same ACM stage in 2007 when her career was just starting to take off, where she giddily got to meet McGraw on stage. Swift won the Top New Female Vocalist the next year. She's come a long way since then.

She's changed, but her core is the same. Swift's music has evolved tremendously since her early Nashville hits — especially her voice and arrangements. That transition was the big story of her album's announcement, but after the record was actually released, the musical shifts were buried under news of its wild sales. But according to Swift, she's kept the most important aspects of country music well represented in her music.

"I'm so unbelievably proud that I learned to treat people with kindness and respect from country music," she said at the ACMs. It's true — whether or not critics believe it's genuine, she maintains connected to her fans and friends.

Swift's appearance at the ACM awards was a sweet reunion, and a fun reminder of the strange journey the singer has taken to pop superstardom. And though Swift and traditional country music might never get back together, Swift hasn't forgotten at all where she came from. She's still consciously supporting and furthering the most important aspects of the genre, which is all a country music fan could ask for.