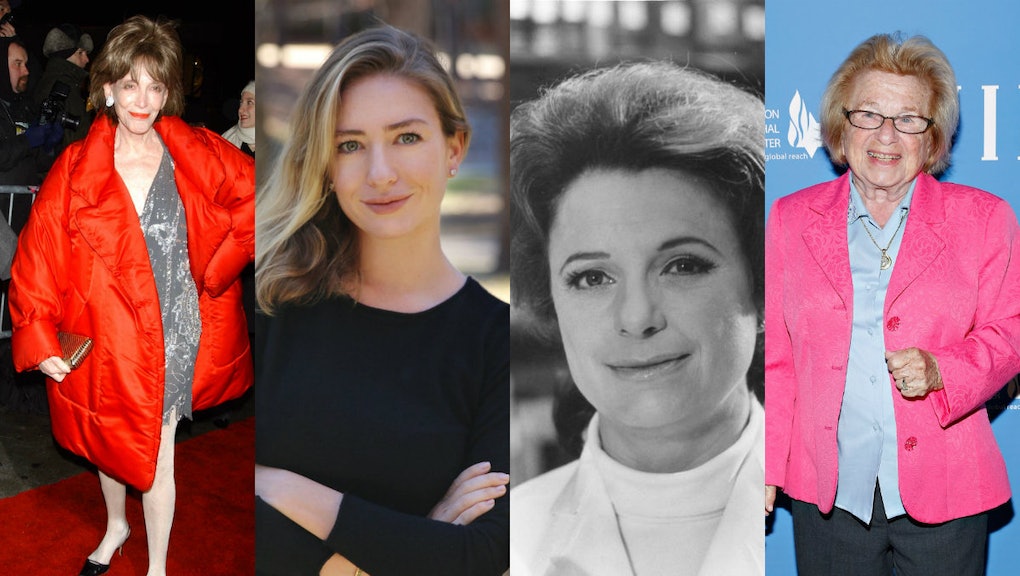 Sex Simply Wouldn't Be the Same Without These 11 Kickass Women

Women haven't always gotten to play a big role in the scientific advancements, studies and cultural conversations concerning sexuality. The superiority of vaginal orgasms over clitoral ones? Decided by one Sigmund Freud. Vibrators as tools to cure women of their so-called hysteria? Pioneered, of course, by male doctors.

But numerous powerful women have elbowed their way in, taking control over female sexuality and introducing innovations that actually address what women want and need. Here are 11 of the badass trailblazers who changed all of our sex lives as we know them:

Working alongside her husband, gynecologist William H. Masters, Johnson rose from her job as an assistant to become one of the most influential sex researchers of the 20th century. The couple's 1966 landmark book, Human Sexual Response, introduced culture to the idea of the sexual response cycle, which highlights the varied ways humans respond to stimulation and brings emotions into the equation.

Some of her most lasting contributions to the field include the ideas that penis size doesn't influence sexual satisfaction and that there is no difference between a clitoral and vaginal orgasm, as the New York Times highlighted in its obituary for her. Oh yeah, and Johnson's work also provided evidence that women could have multiple orgasms.

Sanger, a lifetime feminist and activist, coined the term "birth control." After getting a nursing degree, Sanger began her career with a 1912 column titled "What Every Girl Should Know," which focused on educating women about sex. She went on to open the first legal birth control clinic and establish the American Birth Control League — which would later become Planned Parenthood Federation of America — despite strict anti-obscenity laws (and an arrest) that threatened to silence her.

While Sanger has received deserved criticism for her involvement in the eugenics movement, she remains a central figure for reproductive rights. "No woman can call herself free until she can choose consciously whether she will or will not be a mother," she once wrote, a sentiment that still rings true today.

Judy Blume gave us permission to talk about our changing bodies.

It's no wonder that so many people claim Blume taught them everything they know about sex.

With Brown's 1962 book, Sex and the Single Girl, came a stereotype-shattering idea: Single ladies enjoy sex. Brown brought that sex-positive viewpoint to Cosmopolitan magazine, where she served as editor-in-chief from 1965 to 1997 and revamped the housewife publication with suggestions on how to meet the perfect man, look stylish, embrace affairs, get ahead in life and generally explore all aspects of sexuality without shame.

"Perhaps none of these things — not the books, not the unabashed look of Cosmopolitan and its legion of imitators, not the giddy pleasure with which American women embraced sex without shame — would have happened quite as soon" if not for Brown, the New York Times' Margalit Fox wrote after Brown's death.

The author of the 1949 tome The Second Sex is considered the "mother of the modern women's movement." Throughout her work, de Beauvoir explored the oppression of women and spoke frankly on matters of motherhood, marriage and affairs. "The curse which lies upon marriage is that too often the individuals are joined in their weakness rather than in their strength, each asking from the other instead of finding pleasure in the giving," she wrote. That viewpoint, among others in The Second Sex, was solid groundwork for second-wave feminism and made marriage and relationships part of the feminist debate.

In her own personal life, her long-term relationship with John-Paul Sartre was famously progressive — the two never married and practiced consensual non-monogamy.

A campaigner for women's rights, Besant stood out in the Victorian era for her liberal, anti-religious values. In the 1870s, she and Charles Bradlaugh edited a weekly newspaper, the National Reformer, which advocated progressive views on women's right to vote and contraception. In 1877, Besant published and distributed Charles Knowlton's "Fruits of Philosophy," a pamphlet guide to birth control methods for young married couples.

"From vaginal douches to early forms of spermicide and even condoms, the information in the pamphlet became so popular that its British circulation reached over 125,000 in the first few months alone," the Guardian reported. Besant and Bradlaugh were tried for obscenity for the birth control guide, but were later acquitted. Besant remained one of the brave pioneers of women's health until her death.

Audre Lorde made the conversation around sexuality intersectional.

A New York-based poet who stormed the scene in 1968 with her debut volume, First Cities, Lorde was one of the first radical feminist thinkers to put forth the idea of intersectionality, specifically addressing the fact that the white middle class woman's experience didn't hold true for all women. Her work examined life as a woman of color, feminist and lesbian.

It wasn't until Dr. Ruth that a prominent figure used their platform to advocate that normal, everyday people should be talking about their sex lives. The psychosexual therapist pioneered her own brand of frank sex talk in 1980 with her radio program, Sexually Speaking. From there, she went on to host the cable series The Dr. Ruth Show, where viewers phoned in with personal questions. True to her message, Dr. Ruth addressed each in a candid and non-judgmental way.

She still speaks (and tweets) about sex and pleasure in a medically accurate and down-to-earth voice previously unfamiliar to pop culture, helping spread "sexual literacy" to the masses. Her wizened German accent keeps everyone listening.

Françoise Barré-Sinoussi educated us about AIDS.

A 2008 Nobel Prize winner, Barré-Sinoussi is credited (along with her colleague, Luc Montagnier) for discovering HIV in 1983, after they took just 15 days to find the virus that causes the disease.

Still working today, Barré-Sinoussi has turned her attention toward prevention and treatment — something she thinks is absolutely possible in the future. "We have all of this science, all of this research into HIV being presented and the key information we are getting from these models is that, 'It is possible to stop AIDS. So go ahead,'" she told the Guardian in 2014.

Whitney Wolfe got everyone thinking differently about casual sex.

Say what you will, but dating (er, "hookup") app Tinder has wholly changed the conversation on modern sex, from how we meet new partners to the casualness with which we approach sex. Wolfe, the app's former marketing vice president, had no small part in that; she helped the behemoth app reach its current estimated 50 million active users and change the conversation around women's place in hookup culture.

Wolfe also stood up for herself as a woman when she brought a very public sexual harassment lawsuit against her former Tinder coworker, co-founder Justin Mateen. On the heels of the lawsuit, Wolfe founded a women-centric dating app called Bumble, a Tinder-like platform that puts women in the driver's seat.

Wolfe's work challenges the gendered notions of who can initiate dating and sex, and it reminds women everywhere that we're all in charge of our sexuality.

This article was originally published on April 21, 2015