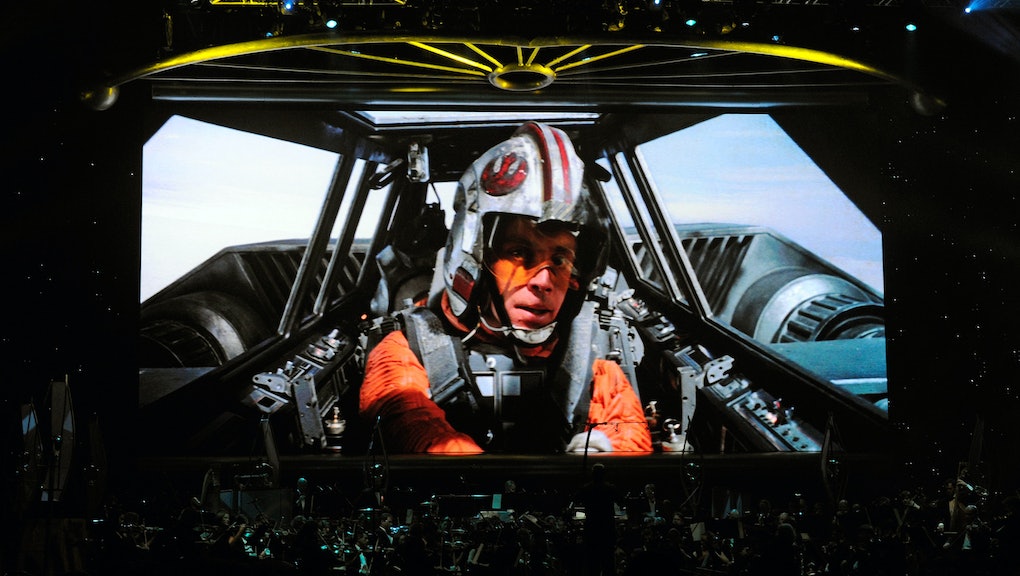 "The galaxy far, far away, I actually feel like I'm still in it, that I never really left it," Williams said. "Having worked on all of the six films, I'm just happy continuing to be part of the whole fun of doing it."

Williams' score is more than just a part of the film, though — it is its essence, the blueprint on which whole subsequent genres of film have been enlivened. It not only helped transform the Star Wars franchise into a timeless mythic saga, but also changed the way composers approach movie scores. Williams ushered in a move from more popular sounds toward symphonic, neoclassical scores, bringing weight to often-underrated genres like science fiction. Without him, the films, and film as a whole, wouldn't have been the same.

His vision: When Williams wrote the score for the original Star Wars in 1977, he was already a semi-famous composer. He'd studied at Juilliard, written themes for TV shows like Gilligan's Island and Lost in Space, and won an Oscar for his adaptation of Fiddler On the Roof. And when Steven Spielberg and Williams joined forces for Jaws in 1975, that score put Williams into the realm of famed composers like Henry Mancini and Hans Zimmer. In the process, he established the careers of two of the most important American filmmakers: Spielberg and George Lucas.

"I am probably the only person who can boast that I have collaborated with John Williams for exactly half of his life," Spielberg said in a tribute to Williams in 2012, according to NPR. "This year marks our 40th year of working together, and I have to say, without question, John Williams has been the single most significant contributor to my success as a filmmaker."

Soon after Jaws came out, Spielberg's friend Lucas was looking for the right person to score his ambitious space-themed movie, and Spielberg recommended Williams. The film and composer were made for each another. In Star Wars, Williams re-introduced classical music elements like leitmotif, in which certain characters and themes carried particular musical elements. This revival of traditional techniques ushered in an era of neoclassical movie scores.

"Scholars, film-music historians and experts are also more or less unanimous in giving Williams' score credit for launching a sort of 'Film Music Renaissance,'" Emilio Audissino wrote in John Williams' Film Music. "After years of mostly market-oriented music, his narrative-oriented scores brought back to the general attention the importance and power of music as a device of cinematic art, and the fundamental help that it can give to film narration."

His influence: The success of Williams' film music renaissance is evident in both the proliferation of weighty symphonic movie scores in blockbuster films — scores like Gravity and The Lord of the Rings — and also in the reverence of filmmakers and modern composers.

"John Williams' score was real music for a grounded reality: a dirty, distant galaxy with machines that looked used," musician Reggie Watts told Wired. "It had a character-based musicality. The music kicks in and you're like, 'Oh, some stormtroopers are definitely going to be around.'"

Watts is referring to leitmotif when he says "character-based musicality." For example, the weightless but powerful "Princess Leia's Theme" plays when the princess is on camera, just as the heavy-handed "Imperial Attack" signals to the viewer that doom and destruction are imminent. Williams' use of leitmotif to distinguish characters and themes was a kind of musical aid for the movie-goer.

"That consistency," NPR writes, "allows fans and even casual observers of the series to make connections from film to film, reminding viewers of previous events and tying characters forever to recurring, individual themes: most notably the ominous 'Imperial March' associated with Darth Vader."

His legacy: Williams' legacy of neoclassical music is now being passed to the next generation of composers, who are using his innovations to elevate stories and styles that might fall flat otherwise. Alexandre Desplat, who followed in Williams' footsteps with symphonic scores for Girl With the Pearl Earring, Godzilla and Oscar-winning The Grand Budapest Hotel, is in line to score the upcoming Star Wars spinoff, Rogue One.

When Desplat first watched Star Wars in 1977, he recalled in an interview with Classic FM, "The music was so elaborate, so inventive and wide open to 20th century classical music. Suddenly you heard in John Williams' scores the influence of the early- and mid-20th century, and it was so refreshing and so exciting."

Movies and the music in them haven't been the same since the Star Wars saga began in 1977. Williams led the way for music to be an integral part of film, an art form that rivals the filmmaking itself. Thanks to his legacy, music changed the way movie-goers experience film.