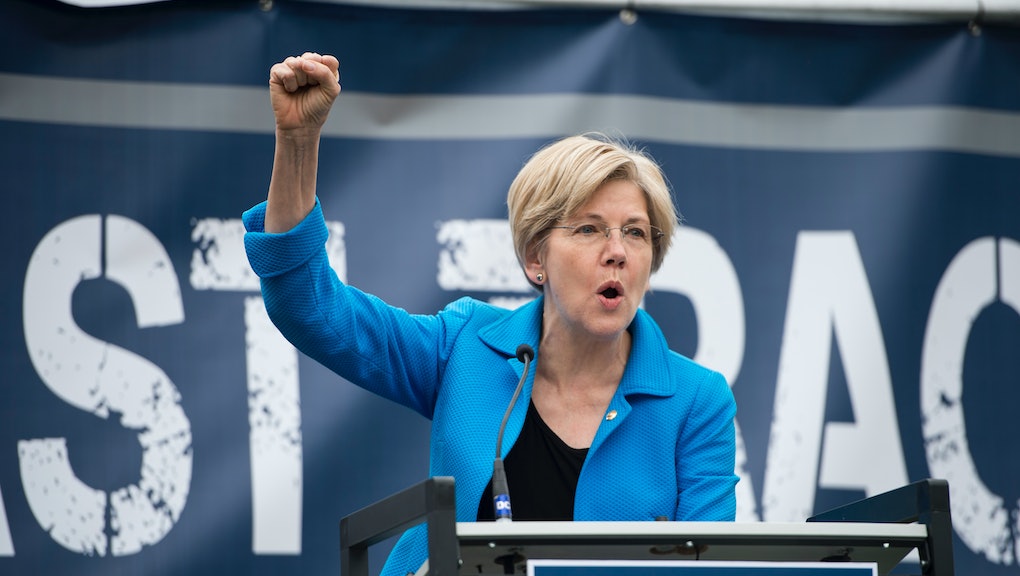 How Elizabeth Warren Is Winning Without Even Running

Realistic liberals have known for some time now that their efforts to "draft" Sen. Elizabeth Warren (Mass.) into the Democratic primary contest were a lost cause. But Warren's decision to pass on a primary death match with Hillary Clinton is looking wiser by the hour. In her absence, the doyenne of American progressivism has only grown more influential. She is the ghost in the Clinton machine.

As if guided by Warren's invisible hand, Clinton opened her campaign by unloading a series of populist potshots against the Massachusetts senator's usual targets. In Iowa, just hours after declaring her candidacy, Clinton went after CEOs and hedge fund managers. Her message, from the java houses of the Midwest to the bakeries of New England, has been unrelenting: She is here and ready to put her finger in the eye of an increasingly powerful and self-isolating moneyed class.

For Warren, Clinton's emerging campaign rationale is evidence of a more consequential victory than she could have accomplished running herself. With 19 months to go until a new president is elected, Warren, though out of the race, is running away with this Democratic primary — at least when it comes to the battle of ideas.

All day, "everyday": In her first formal message to voters, delivered April 12 via video, Clinton mostly ceded the screen to archetypes of the demographic groups whose backing she will require from the first round of caucuses straight through Election Day.

"Americans have fought their way back from tough economic times, but the deck is still stacked in favor of those at the top," Clinton said. This was not the anodyne "conversation" promised during her 2008 campaign launch — these were something like fighting words.

In the 10 days since the announcement, Clinton has delivered Warren's message with a convert's zeal.

"There's something wrong when CEOs make 300 times more than the typical worker," Clinton said, seated at the top of a roundtable in Monticello, Iowa. From there, Clinton moved on to her desire to remove "unaccountable money" from campaigns, "even if it takes a constitutional amendment."

Then, just as word descended that the campaign would accept lobbyists' donations (something Obama mostly refused in 2008 and 2012) and liberal ire began to bubble up again, so came a timely bit of personnel news.

Brought on board to work as the campaign's chief financial officer, Gary Gensler has been described by the Wall Street Journal as an "archenemy" of the big banks. "Elizabeth Warren, the Congressional TARP watchdog, may have met her match," the Journal said by way of introduction in April 2010. The suggestion, to be clear, was that Gensler would be harder on Wall Street than Warren. They would both wield a strong hand in the post-crisis legislative battle, emerging as key architects of the Dodd-Frank Wall Street Reform and Consumer Protection Act.

Gensler's role on the policy end of the campaign is unclear, and he is not without more friendly connections to the financial services industry, having spent time as a partner at Goldman Sachs before joining President Bill Clinton's deregulation-mad Treasury Department. But his more recent work is formidable and liberal groups, including the bellwether blog Daily Kos, have happily endorsed the hire.

Clinton's campaign and allies in Democratic politics have been especially keen to highlight her personal passion for these issues. In an anecdote reported by the New York Times on Tuesday, "several people who were briefed on Mrs. Clinton's policy discussions but could not discuss private conversations for attribution" told a reporter how personally offended Clinton had become with worsening income inequality.

Presented with a chart laying bare the disparity in wage growth between the working and investor classes, Clinton, according to the Times, "said the economy required a 'toppling' of the wealthiest 1%."

The real "champion": "Everyday Americans need a champion, and I want to be that champion," Clinton said in her kickoff video. Four days later that word — "champion" — was there again, this time over a tribute to Warren in Time magazine's 100 Most Influential People issue:

The author of this shimmering endorsement? Hillary Clinton, of course. The winking "presidential aspirant" has set herself up as one of the powerful few to be held to account by Warren. This is a relationship that, at least in the current environment, is beneficial to their mutual interest. With Warren's approval, tacit or otherwise, Clinton will have every opportunity to win over the blood-and-guts activists that held together the Obama coalition.

Still, critics in the form of suspicious liberals or eye-rolling Republicans (or eye-rolling Democrats and suspicious Republicans) are apt to dismiss Clinton's left turn as a tactless tactical adjustment. But the former New York senator and U.S. secretary of state is no cypher. There is little question about her ability; the question is whether Clinton wants the fight at all.