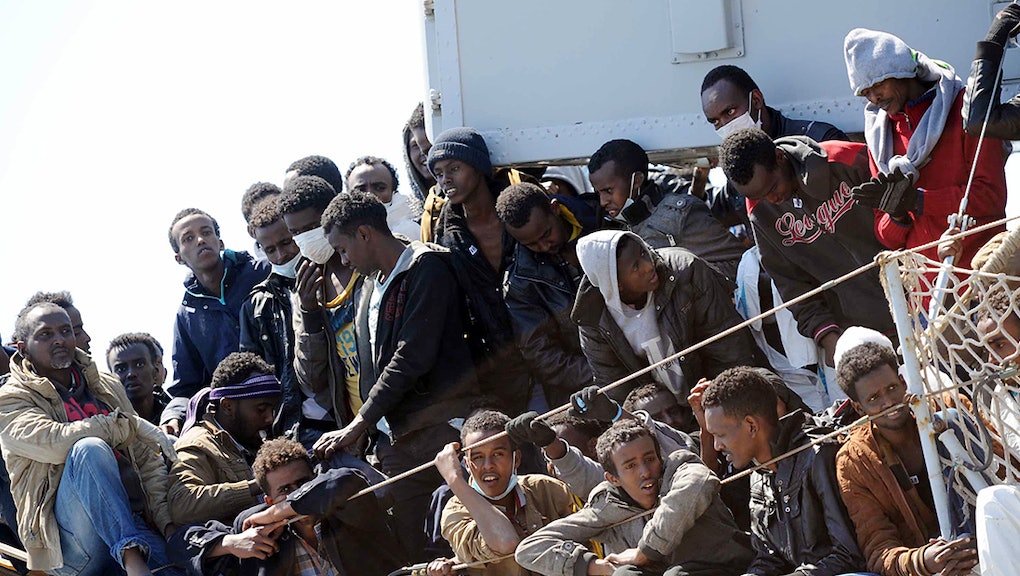 Every year, thousands of people drown while attempting to migrate across the Mediterranean Sea into Europe. In the most recent tragedy, hundreds died Saturday when a 70-foot boat carrying as many as 700 people capsized in Libyan waters. Just days before, nearly 400 drowned in a similar incident.

According to the BBC, the United Nations estimates approximately 218,000 people attempted to make the journey in 2014. Of those, 3,500 died. Yet even as the humanitarian crisis in the Mediterranean grows, Europe is turning away from them by slashing funding for search and rescue programs.

One recent cartoon published in the Spanish newspaper El Mundo captures the hypocrisy of rich European countries ignoring the plight of countless people struggling to reach safety there.

People keep dying, and no one cares: Crammed in tiny boats run by smugglers with little concern for safety, the migrants suffer immensely for extended periods of time. Sometimes they are denied food or water. One Somali teenager who survived the journey to Malta told CNN that he told his family members, "it's 95% sure you will die."

The smugglers, a mix of Libyan militias and organized criminals, get rich. The smuggled suffer and perish. The Europeans, for their part, out of concern that search and rescue operations merely encourage future migrants, all too often look the other way.

"We do not support planned search and rescue operations in the Mediterranean," British Foreign Office Minister Joyce Anelay explained to Parliament last year. "We believe that they create an unintended 'pull factor,' encouraging more migrants to attempt the dangerous sea crossing and thereby leading to more tragic and unnecessary deaths."

As the Washington Post's Sarah Kaplan notes, right-wingers in countries such as Italy have criticized the search and rescue operations as making illegal immigration easier.

"The total number of arrivals in Italy in 2014 went up over 300% from the year before, to more than 170,000," British playwright and activist Anders Lustgarten wrote in the Guardian. "And the EU's response, driven by the cruellest British government in living memory, was to cut the main rescue operation, Mare Nostrum."

The Italian government ran Mare Nostrum from 2013 to 2014 and, according to the European Council on Refugees and Exiles, is estimated to have rescued more than 140,000 people during that time. After the U.K. pulled its support for the operation, it was replaced by a program called Triton, with one-third the budget. That's despite the fact that the Mediterranean Sea deaths amount to the biggest migration-related crisis in the world:

The human toll: As migration across the Mediterranean is increasing, resources to help the human suffering have dwindled. The result has been that a lot of people have died unnecessarily. The International Organization for Migration, an intergovernmental organization that works to ensure the "orderly and humane management of migration," reports they now believe approximately 1,727 people have already died so far this year.

The death toll doesn't seem likely to slow down, either. "The migratory pressures to Europe are something that's not going to go away," immigration expert Francesc Ortega told the Washington Post. "And the truth is there are very limited legal pathways to migrate to Europe. ... Those two facts combined make smuggling very profitable."

"The new slave traders of the 21st century must not believe that Europe considers this one of the least important issues on its agenda," said Italian Prime Minister Matteo Renzi, according to International Business Times. Maltese Prime Minister Joseph Muscat told CNN, "Gangs of criminals are putting people on a boat, sometimes even at gunpoint. They're putting them on the road to death, really, and nothing else. ... [It's] genocide — nothing less than genocide, really."

Yet with political infighting derailing any attempts to beef up search and rescue operations in the sea, the genocide Muscat describes does not actually seem very high on Europe's priority list. As that haunting comic illustrates, the graves will continue to mount while those with the power to help stop it do nothing. It's completely unconscionable. But it will never stop unless something changes.