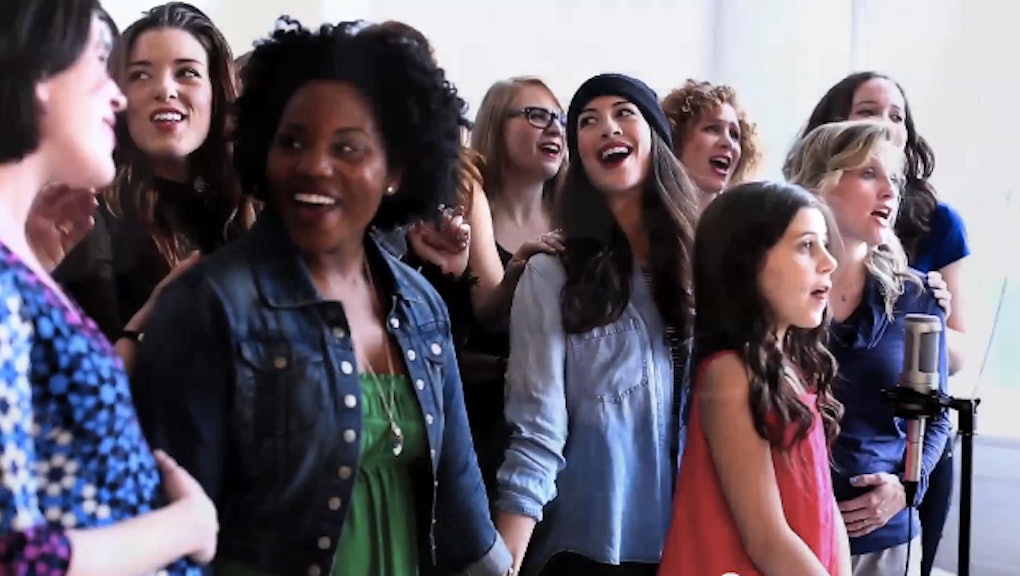 Your Favorite Celebrities Are Joining Forces to #MakeItFair

From Meryl Streep's writing lab to pushing back on Disney princesses, there's no doubt women in entertainment are fed up with the status quo. That's why more than 70 actresses, including the likes of Rita Wilson, Mamie Gummer, Jessica Hecht and Orfeh, recently teamed up with an all-female production team to create a video for the Make It Fair Project, which according to its website, is "a call for gender equality in the stories we tell, the wages we earn and the future we shape."

The video tackles the issue of women's underrepresentation from an alternative perspective: the misfortune of overrepresented men.

These female celebrities empathetically recount the raw deal men in Hollywood face, including the rate at which they direct and write films, the infrequency with which they appear naked in them, as well as the prevalence of speaking and leading roles with which they're burdened.

They then pause for a quick song break: "We stand here together / And together we'll break down this wall," they sing. "We won't relent until it's 100% / It's only fair that men should have it all."

Then, back to statistics.

They note that men carry the burden of winning the most Oscars for best original screenplay and see their work produced on Broadway all too often.

And beyond show business, men are charged with managing the spheres of politics and business as well — and they have to shoulder the weight of being paid 30% more than their female counterparts to do so.

The video concludes on a serious note. "These numbers impact everything," viewers are reminded. "The stories we tell. The wages we earn. The future we shape."

And it's true: Countless studies show media representation not only affects women's lives by shaping their self-conception, but also shapes men's attitudes by teaching them they are the default protagonist and women are secondary to them.

"As we move forward, we will continue to raise awareness, ask tough questions, celebrate female talent, connect female artists to opportunities, laugh, create and broaden the scope of the stories being told," the Make It Fair team wrote on their website.

With their powerful combination of humor and sobering facts, the organization will undoubtedly continue to gain attention, raise awareness and implement change.