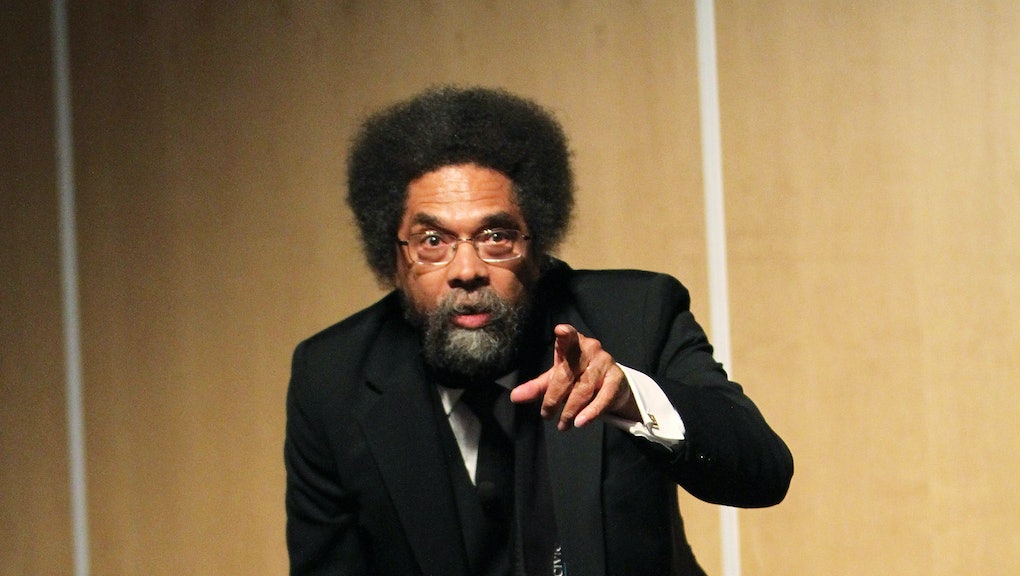 Cornel West Has Plenty of Problems, But He's Still Essential

This week, one of America's most influential public intellectuals was plunged into a sea of venom. Cornel West, the acclaimed philosopher whose work on race and politics has helped shape national dialogue about American democracy for decades, was the target of an excoriating 9,500-word takedown in the New Republic by Georgetown professor Michael Eric Dyson.

Dyson, a former close friend and protege of West's, and a respected sociology scholar in his own right, penned a formidable critique. Rarely is vitriol delivered so poetically, and rarely are people so rigorous in fleshing out someone else's vices, whether in private or public. Dyson details his former affection for West and his work before launching into an exhaustive tour of West's many well-known issues: his self-obsession, his sanctimony, his tendency to question the blackness of other black leaders with whom he disagrees on political issues.

Dyson is right as far as he goes in most of his criticisms — and he goes deep — but eventually it becomes impossible to ignore a nagging sense that some of his manifesto may be personal grudge masquerading as intellectual disagreement. Did this all have to happen in public? Why so many years after West's most racially charged comments about Barack Obama? And why at such staggering length?

The man is on a mission. So single-mindedly, in fact, that he sweeps aside West's status as a powerful agitator. West's personal flaws may be substantial, but his interpretation of what it means to be a public intellectual is vital and woefully undervalued. He's concerned with life outside of the ivory tower: decoding the complex structural forces that produce human misery, and striving to find a way out; taking to the streets and putting his body on the line through civil disobedience. West doesn't practice everything he preaches, but at least he's willing to preach, and to attempt practice. Most other academics resign themselves to documenting society's problems privately, without a struggle.

West's problems: As Dyson thoroughly catalogues, West's provocative scholarly output has plummeted since the 1990s. West's claim to be a prophetic figure in the Christian tradition is at best an act of singular pomposity and at worst a quality that eliminates the possibility of introspection or self-doubt. West criticizes others for seeking celebrity, but it's evident that he has his own fondness for it and is at times desperate for it.

Most troubling is the way West deals with other members of the black community whom he considers too conservative. His disaffection for Obama led to him to call the president, on various occasions, a "Rockefeller Republican in blackface" who has a "fear of free black men." That kind of rhetoric is indefensible, and it's clear that his conflation of blackness with his own brand of leftism has contributed to the kind of anger that inspires people to write 9,500-word takedowns of him.

West's unacknowledged strengths: But Dyson has an absorption in West's problems that causes him to elide the man's crucial virtues. Setting aside West's demeanor problems, it's easier to acknowledge that he is doing important work that very few members of academia ever do: embed themselves in the public sphere, and use their presence and influence to galvanize endeavors for a freer society.

It's clear that West's distraction from traditional scholarly production is in large part because he's busy taking complex ideas out into the real world. He's constantly giving talks about human liberation in his mesmerizing, jazz-influenced style of oratory. In recent years he's toured the United States to discuss poverty. He's worked in New York City to end racial profiling practices under the stop-and-frisk regime, which resulted in his arrest. He's spent time in Ferguson, Missouri, to bring attention to police brutality and help local organizers (he was also arrested at protests in Ferguson). This level of civic vigor is in keeping with West's long history of activism on issues ranging from the injustices of capitalism to the Israeli-Palestinian conflict, in which has has sought to blend the power of theory with lived experience.

In conversations with organizers who've worked with West in New York and Ferguson, West's reputation for narcissism seems to be irrelevant in comparison to his tendency to offer himself in solidarity with important progressive causes.

"He has consistently shown up," the Rev. Osagyefo Sekou, an activist living in Ferguson, Missouri, who has worked with West on many occasions, told Mic. "He's the only black visible leader, save [historian] Robin Kelley, who maintains the highest level of street credibility in Ferguson. Not Jesse [Jackson], not [Al] Sharpton. Cornel spoke to a crowd of about 3,000 primarily young people. They were excited to hear him talk, and he marched with them."

West's vision of black liberation in the context of the Black Lives Matter movement has often been contrasted with Sharpton's. Sharpton stirred national controversy when he chose to use the funeral of Michael Brown, the young black man slain at the hands of the police in Ferguson, as an opportunity to wag his finger at "ghetto pity parties" and offer up classic conservative tropes about the black community's penchant for self-destruction.

West, on the other hand, encouraged protests, and reportedly attempted to leverage his celebrity to empower local leadership by only talking to the press when accompanied by local organizers.

"He consistently takes the backs of the people, and puts his neck out, both literally and metaphorically (in terms of reputation) as a result," Jamel Mims, an organizer with the Stop Mass Incarceration Network in New York City who was once arrested with West during an action against racial profiling, told Mic. "Cornel is well-known and respected in not only for his rage against this system — but for his heart and soul for the people, and being a person of heroic integrity who gets right down into the streets with the masses — even when it is unpopular among his colleagues."

West has many kinds of problems, but most are of little interest to anyone outside the self-obsessed media world. Outside the media world, people aren't spending most of their time gossiping about which popular academic has the more fragile ego. Instead, they wake up every day to yet another video of a black man murdered by the police for no reason. The people committed to changing this aren't concerned with your personality. They're looking to see if you show up.