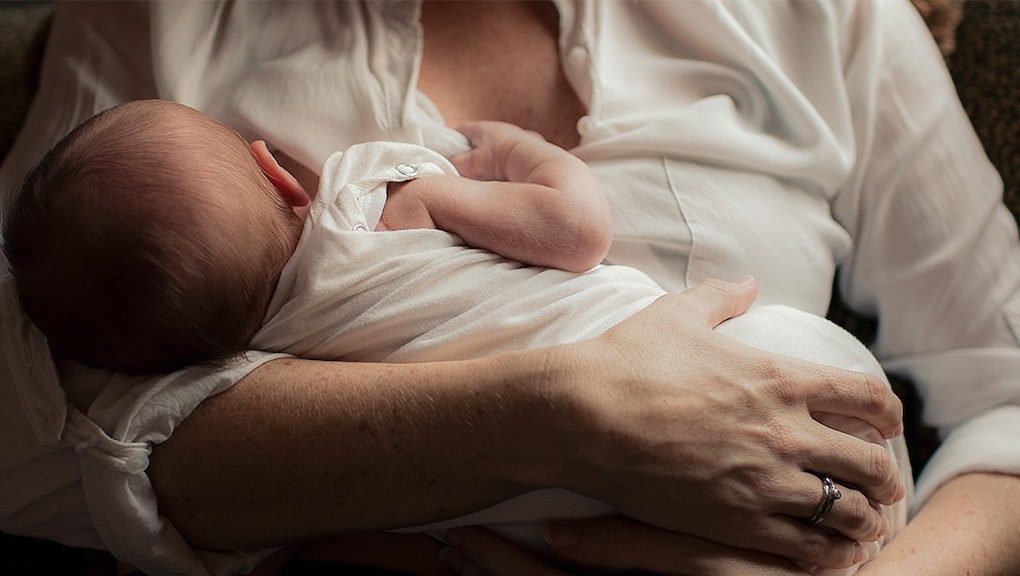 Elisha Beach gave her Instagram followers an surprise over the weekend: an image of herself answering two calls of nature at once.

In the post, which has since spread over the Internet, the California woman is breastfeeding her toddler while on the toilet. Here it is in all its glory, along with the caption "This is motherhood and it ain't always pretty. What's your #momtruth? #motherhood #motherhoodaintpretty #tmi #confessionsofamom #ididthat #iamnotsorry."

It also ended up on the Facebook page Life of Dad, with the caption "Every parent knows this joy":

But ew, that's gross! That's kind of the point. Beach told KCBS-TV the intent of the Instagram post was to highlight the fact that mothers do this kind of unappreciated dirty work every day, only to be subject to constant criticism. According to Beach, the situation pictured wasn't intentional, but the result of her young toddler entering the bathroom and demanding her morning feeding immediately.

"I just wanted to show people real life like this is what my daily life looks like. I just see so many moms doubting what they do every day or feeling judged, and it's like the media doesn't really portray what motherhood is," she told KCBS.

In other words, this is what motherhood often looks like. It's not the sanitized, fake version that gets shown in commercials. And luckily, Facebook commenters took note:

To Beach, the backlash she received is yet more evidence of the vitriol that often gets hurled at mothers who are doing their best to raise their children. "I've gotten 'You rock, Mom.' 'I do this every day.' 'I'm doing this right now.' 'This is my life right now,'" Beach said. And then I've gotten 'You're disgusting.' 'You have no class.' 'You're a terrible mother.'"

Why you should care: Shaming women for breastfeeding is one of the many ways in which mothers are often subjected to the message that their time, resources and effort are simply worth less than others', despite the fact they're doing all the hard work of parenting.

A 2013 poll by Pew Research Center illustrated the fact that while fathers have begun pitching in more on thankless tasks like household chores and child care relative to their peers in 1965, they still lag far behind mothers in both areas.

This bad attitude toward mothers hits home — hard. One recent survey released by Penn Mutual Life Insurance Company found men tend to overestimate the value of their contributions to the home outside of work, while women underestimate. The survey estimated that mothers of a minor child put in an average of $44,913 hours' worth of unpaid labor a year, and over half of those women underestimated their contribution to the household by at least $10,000.

So the next time you feel the need to tell a mom off for what she's doing wrong, keep in mind all the unpleasant things you probably put your own childhood caregiver through. It wasn't all dainty decor and the smell of roses.