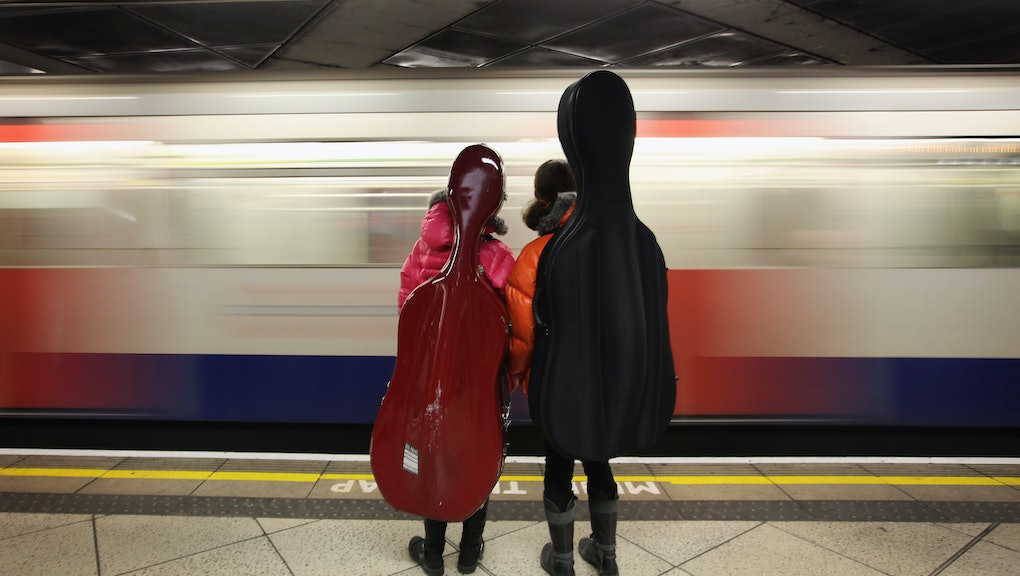 Science May Have Finally Discovered Why Humans Make Music

For years, scientists and philosophers have sought to determine the purpose of music in human life. Kant thought it was essentially useless. "[I]f music confers no survival advantage, where does it come from and why does it work?" cognitive scientist Steven Pinker wrote in 1997. "I suspect that music is auditory cheesecake, an exquisite confection crafted to tickle."

Anyone who has felt the extraordinary healing powers of music or has read any of the science behind the tremendous cognitive benefits it can provide knows that there must be a higher purpose to the art form. But scientists have been hard-pressed to find it.

Leonid Perlovsky, a physics and cognition researcher and visiting scholar at Harvard University, may have figured it out. He believes music serves a profound evolutionary purpose. In a piece for the Conversation, he dissects years of his research to argue that "music is an evolutionary adaptation, one that helps us navigate a world rife with contradictions."

"This is the universal purpose of music," he writes — and he may be right.

The "universal purpose." According to Perlovsky, music's power comes from its ability to help human beings overcome cognitive dissonance, the feeling of emotional discomfort we feel when we learn novel information that contradicts existing beliefs. It's a powerful force for anxiety that affects our decision-making and ability to learn. It's one of the most extensively studied phenomena in social psychology. We all experience it multiple times every day.

Numerous psychological studies show that the most common responses to this dissonance are to reject the new information or suppress the old. However, this has questionable evolutionary consequences, because it means we never learn the truth about what's bothering us. That, Perlovsky believes, is why music exists. Music soothes the difficulties involved processing conflicting information.

The proof: He provides compelling evidence for this theory with a series of social psychology experiments. In one, researchers asked a group of 4-year-olds to rate a group of toys from favorite to least favorite, before asking them not to play with their "second favorite."

That led to some dissonance — the children used to enjoy playing with their second favorite toy, but they had a hard time squaring that with their definitive statement that they didn't really like it. When researchers tried to re-engage children in play, they found that children had totally devalued the toy, suppressing their original love for it. However, when this same experiment was performed with music playing, "the toy retained its original value," Perlovsky writes. "The contradictory knowledge didn't lead the boys to simply discard the toy."

He describes a similar study he performed in 2012, in which 15-year-olds were given a multiple-choice test and asked to rate the questions on difficulty. When they took the test, Perlovsky found that students answered the difficult more questions more quickly "because students didn't want to prolong the unpleasant dissonance of choosing between difficult options." However, when Mozart was playing in the background, the students spent more time on difficult problems and therefore got better scores. These findings, he believes, might be part of the reason the "Mozart Effect" gained such traction in the '90s.

The unifying theory: Perlovsky's research may provide the broad schema we need to unify some of the many amazing discoveries we've made about music. Several recent neurological studies prove that music has tremendous power to modulate mood and offset stress levels. One study, compiled by neuroscientist Daniel Levitin in a 2013 meta-analysis of more than 400 neurochemical music studies, found that listening to music had a more measurable effect on people's anxiety and cortisol levels than did anti-anxiety drugs.

Levitin and other researchers have also found music listening and playing can have a profound effect on social cohesion. It can functionally synchronize individuals' internal rhythms and promote feelings of group love through modulation of oxytocin. Evolutionarily, music may have played an important role in helping our ancestors establish cooperative societies, by helping them experience a sense of kinship with potential competitors.

Music may have a comparable evolutionary importance to language. By helping our ancestors connect with one another, strengthen their cognitive faculties and reduce cognitive dissonance, music faculties could have easily proved an extraordinarily beneficial evolutionary adaptation. Even today, it helps us maintain a vital equilibrium in the face of the constant stresses we face in our day-to-day lives. There is no question that music is more than just a diversion.