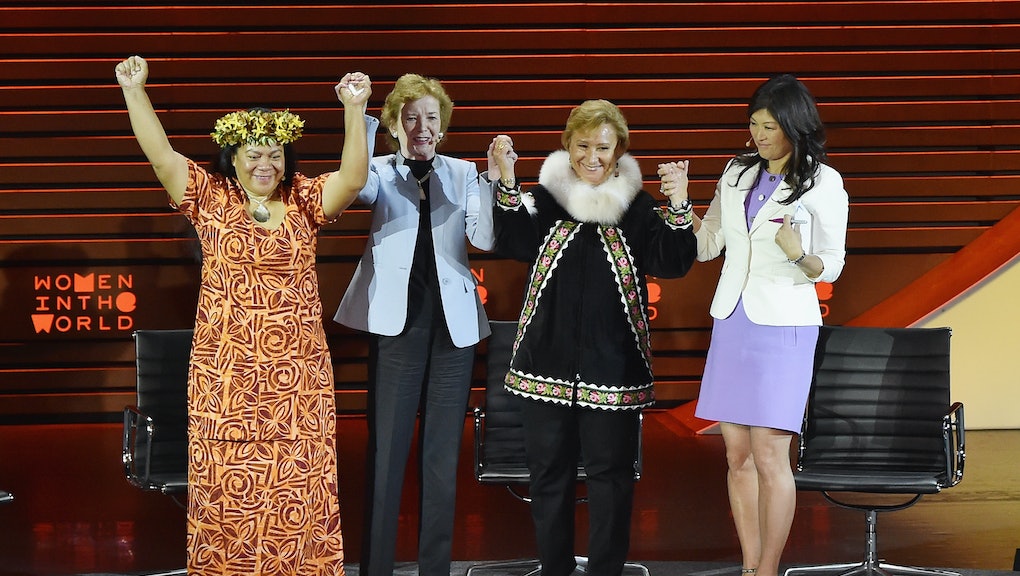 Last week, legions of powerful women gathered in one room in New York at the sixth annual Women in the World Summit, bringing together activists, artists, peacemakers, entrepreneurs and dissidents from all over the world to discuss the most pressing phenomena they regularly face and how they're fighting for change.

Here are 10 of the most shocking facts raised during the convening that every woman should know.

1. #BringBackOurGirls did not, in fact, bring back our girls.

In April 2014, more than 270 Nigerian girls were kidnapped. Activist Obiageli Ezekwesili launched the hashtag #BringBackOurGirls, rallying countless individuals around the globe to call for their return, but these girls are still missing one year later. What's more, their kidnappers, the militant group Boko Haram, still regularly commit  atrocities in the region.

"The opposite of love is not hate, it's indifference," Ezekwesili said of this failure. But she's hardly giving up: Most recently, she urged President Barack Obama to do more for the girls and asked others to echo her plea. "Every one of you must use your influence," she said at the summit. "It is not yet time to move on."

2. The care industry is huge and dominated by women — but largely unpaid.

While caregiving is a profitable industry — $243 billion was spent in 2012 on care (like senior nursing and daycare) — Care.com CEO Sheila Lirio Marcelo said caregivers are 2.5 times more likely to live in poverty. Perhaps this is because an estimated 66% of caregivers are women, according to one study, and women are routinely expected to do this work for little to no pay.

3. Thousands of Ugandan girls were abducted and forced to be sex slaves and child soldiers — and they're still recovering.

More than 60,000 northern Ugandan children were abducted during the country's 21-year-long civil war, and many of the girls were forced into sexual slavery. The trauma they have faced is unthinkable, and many feel incapable of bonding with the children born from the experience.

That's where Sister Rosemary Nyirumbe, the director of St. Monica's Tailoring Centre in Gulu, Uganda, comes in. The nun helps rehabilitate the women by teaching a skill to rebuild their lives post-trauma. The women learn how to sew, which can help them earn financial independence. The women are also encouraged to bond with their children in their own time. "We are using machines to sew clothes, to sew lives," Nyirumbe told attendees.

4. By 2050, as many as 200 million people will be displaced climate refugees, and women will be most affected.

Climate change is a feminist issue. According to the U.N. report "Gender and Climate Change," women's global marginalized status, overwhelming domestic burdens and lack of control over natural resources render them disproportionately vulnerable to climate change. Considering that by 2050, an estimated 200 million people will be climate refugees, it's crucial that women remain vigilant about the issue.

5. Women in the entertainment industry are fighting for better representation.

Like so many actresses, Helen Mirren and Meryl Streep are no strangers to fighting for substantive acting roles. Mirren spoke about having been asked by a talk show host about whether or not her body detracted from her work as a young actress. Streep said as a young girl, she had few strong female protagonists to look up to. She aspired to "be Tom Sawyer, not Becky [Thatcher]," she said, which is why she's determined to portray and create strong representations of women on screen.

6. The Islamic State group is targeting and abusing Yazidi women in a horrifying way.

While there are plenty of headlines about the Islamic State group, most news does not report that between 5,000 and 7,000 Yazidi women have been kidnapped by the militants, sold into sexual slavery, raped and abused.

"Imagine every morning waiting to be chosen to be raped," said Vian Dakhil, the only Yazidi woman in Iraq's parliament, during Women in the World. "That is the horrific reality of Yazidi women and girls."

Dakhil is fighting back, although her choice to do so has made her an assassination target. That won't stop her: "I'm not thinking about my life," she said.

While breast cancer dominates the conversation surrounding women's health, it is responsible for 1 in 31 women's deaths. Heart disease, however, accounts for an astounding 1 in 3 female deaths. Yet women still perceive it as an "old man's disease," as Barbara Streisand, co-founder of the Women's Heart Alliance, said at the summit.

Gender affects health on even deeper levels: Thirty-six percent of women would not call 911 when they think they're having a heart attack, and medical research is still largely male-centric, which means treatments are not tailored to women's bodies. Women must "fight for being valued," Streisand said. "You deserve the best," she told the audience.

8. The rate of deaths among women due to pregnancy-related complications is higher in some parts of the U.S. than in sub-Saharan Africa.

Nearly 60,000 American women die from pregnancy complications. That's double the rate from 20 years ago, and it puts parts of the U.S. on par with sub-Saharan Africa. Black women are four times more likely to die of childbirth in the United States due to lack of health care and discrimination.

Why? Women are entering pregnancy sicker than ever before for a variety of reasons, including poor access to health care as well as the rise in chronic health problems like obesity, high blood pressure and diabetes. Hospitals also don't have standard protocol for handling obstetric conditions like breastfeeding procedures and high rates of pregnancy loss, noted Harvard University's Dr. Priya Agrawal, and maternal deaths aren't counted in a reliable way in the U.S. What's more, discrimination and lack of access to health care play crucial roles, and likely result in the fact that African-American women are four times as likely to die of childbirth.

Anita Sarkeesian and Ashley Judd have faced their share of online harassment. Last week they addressed how it's not only personally damaging, but it's also a symptom of systemic sexism. The sexism that's evident in cruel tweets and other messages, Judd noted on the panel, is evidence of the way "patriarchy is a system ... not just [individual] boys and men."

California Attorney General Kamala Harris said training law enforcement should be a priority in ending online harassment. "A harm against any one of us is a harm against all of us," she said.

Sarkeesian added that social media platforms must also do better and that Twitter's recent actions to track and prevent abuse are positive, for the most part. "They're actually starting to do their job," she said. "They don't need a cookie for that."

10. We're still closer to equality than we ever have been before.

Former Secretary of State Hillary Clinton, in her keynote address, noted that though there are certainly obstacles ahead, it's arguably never been a better time to be born female. That doesn't mean she won't fight until equality is achieved, though: She cited paid family leave and lack of quality affordable childcare as major obstacles for women she hopes to address if elected president.

"When women get ahead, everyone gets ahead," she said. It's a statement that underscored every moment of the summit. Once we truly recognize this and incorporate it into the very fabric of our society, we all will benefit.