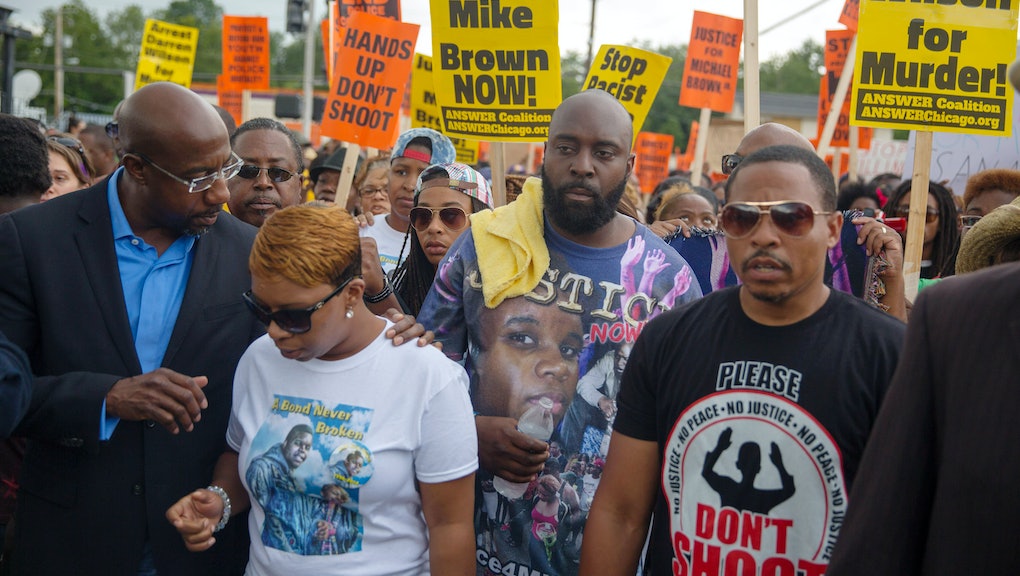 The family of slain teen Michael Brown filed a wrongful death lawsuit Thursday against the city of Ferguson, Missouri, its police chief and Darren Wilson, the officer who killed their son during an encounter on a suburban St. Louis street in August 2014.

They are asking the court for $75,000 in compensation for the loss of their son, unspecified punitive damages and fundamental changes to policing techniques in the city.

After hearing evidence from prosecutors and testimony from Wilson, a Missouri grand jury in November decided not to indict the officer for Brown's killing. The civil suit arrives a little more than seven weeks after the U.S. Justice Department, though declining to prosecute Wilson on civil rights charges, released a damning report on institutional racism and bias in the Ferguson municipal government.

"We believe culture existed that forecasted something like this would happen in Ferguson," Brown family attorney Benjamin Crump said Thursday during a news conference on the steps of the St. Louis County courthouse.

In the lawsuit, Crump and his colleagues reference the DOJ report, arguing it "found that [Ferguson] engaged in a pattern or practice of racial bias and that avoidable harms were levied against African­?American citizens in a disproportionate number" and turned up "a pattern and practice of unconstitutional stops, detentions, uses of force, and unfair policing in general permeated throughout the Ferguson Police Department."

One more insult: For the Brown family, the case against the city of Ferguson is the most promising, Marcia L. McCormick, a professor at the Saint Louis Univ. School of Law, told Mic Thursday morning.

But because the city is funded by taxpayer money, along with the considerable revenue produced by predatory fines and fees levied in disproportionate terms on its black residents, even a winning lawsuit could create more pain — as those same citizens would, essentially, be forced to foot the bill for Darren Wilson and a municipal government that preys on them like an organized crime unit.

What comes next: Much of what comes next will be pegged to the jury's decision: first if it finds that Wilson acted unreasonably, and then if it holds the city of Ferguson responsible for creating an environment that led to Brown's death. In the latter case, a heavy punitive reward could force Ferguson to effectively disappear — the city could go bankrupt, get absorbed into St. Louis or merge its government with another smaller municipality, McCormick said.

Brown family attorney Anthony Gray, taking questions Thursday, said his team would leave the decision on that potential payout to the jury who decides the case, but did not rule out a pre-trial settlement with the city.

This next fight to come in Ferguson is "not really different from anywhere else in the country," McCormick told Mic. "We just know what's happening there, so we can see it in stark relief."