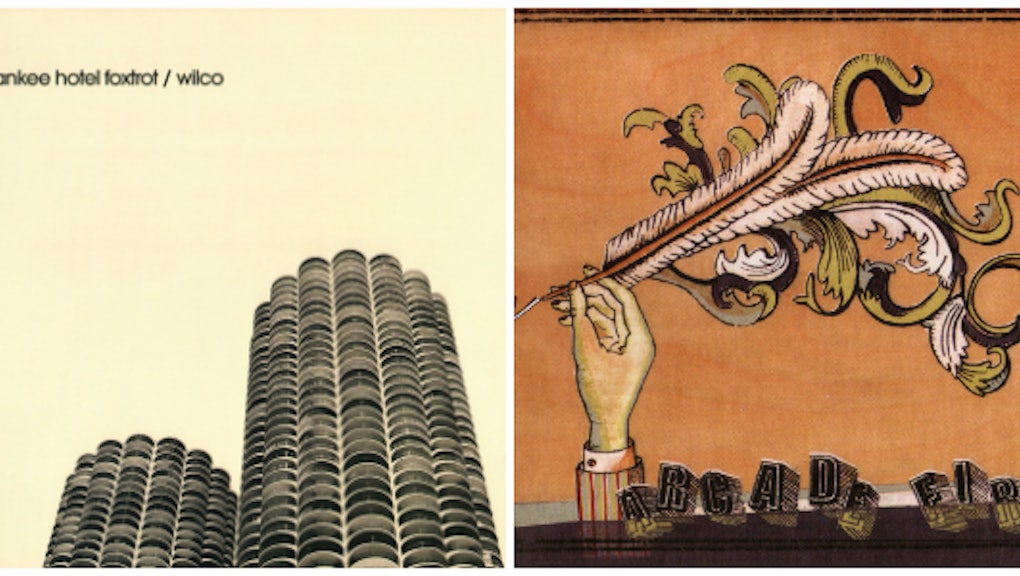 Indie rock is no longer underground. In the past decade, the Decemberists, Cake and Vampire Weekend all had albums reach No. 1, while indie performers like St. Vincent, Alabama Shakes and the National were all noteworthy enough to perform on Saturday Night Live during the past couple seasons. Songs like "Shut Up and Dance" by Walk the Moon are earning major chart-play. Indie music has been a mainstay of popular music, and it's all thanks to the two years from 2002 to 2004.

Independent record labels have flourished since the '80s, and the '90s was when non-major-label releases really started to take off. But the creative flourishing and the mainstream acceptance of the biggest players in indie today can be traced to those magical two years when the Black Keys and Arcade Fire launched their stadium-filling careers, Modest Mouse and Interpol established themselves as critical-darling indie heroes and lesser-known groups like Death From Above 1979 and Broken Social Scene produced their career-defining output.

Here are 15 key albums from the two years that defined today's aural landscape, both indie and mainstream:

The band called their album Funeral because most band members lost somebody close to them during recording: songwriter and singer Régine Chassagne lost her grandmother, lead vocalist and songwriter Win Butler lost his grandfather and multi-instrumentalist Richard Parry lost his aunt. Yet Arcade Fire's debut LP was terrifically anthemic and, at its many peaks, euphoric. The record established the Canadian group as having the potential to be one of the country's finest exports in years (apologies to Nickelback, Avril Lavigne and Justin Bieber, of course) and even reintroduced the wordless chanting chorus to pop music.

Drowned in Sound could barely contain their excitement in their 2005 review of the record, saying, "Encompassing chamber pop melodies, angular art-rock, lavish orchestration and post-punk vocals, its sheer sonic size and ambition goes some way toward justifying the amount of gushing praise that's been heaped upon this album since its September release on Merge last year. The fact that the music is so paradoxically life-affirming and euphoric makes it much easier to write what now feel like trite hyperboles." Those hyperboles never stopped coming. Each one is deserved.

Beck won the Album of the Year Grammy in 2015 for his 2014 album Morning Phase, but that album was ultimately a less powerful version of his 2002 record, Sea Change. The younger album followed a period of stunts like releasing an album exclusively on sheet music, while the older record came after a series of genre-hopping and generally tongue-in-cheek albums.

In a retrospective tribute to Sea Change, Spin wrote about how the record established Beck as more than the musical goofball he was then thought to be: "The 'Loser' guy was capable of this? The guy who did James Brown-style jump-splits on stage was good for more than sonic quick-cuts and a good joke? My favorite Beck song before Sea Change was 'Debra.' That's the one where he sings, in a ball-vise falsetto, 'I wouldn't do you like that / Zankou Chicken.' This is the guy whose songs were crushing me now?" Sea Change established Beck as more than a sonic innovator — it showed him to be a timeless songwriter. That's what the Grammys celebrated this year.

The Big Come Up by the Black Keys

Dan Auerbach and Patrick Carney dropped out of college, formed the Black Keys, got signed to an indie label and produced their album themselves, using an eight-track tape recorder to pump out one of the rawer blues rock albums in recent memory.

In a four-star review, Rolling Stone called it a "righteous choice for rock debut of the year," compared parts of it to the Wu-Tang Clan and declared, "Rawboned blues duo the Black Keys hail from Akron, Ohio, but a listen to The Big Come Up suggests the Keys may have been raised by Mississippi ridge-runners. While Dan Auerbach's overdriven ax is powered by the same internal-combustion engine that drove blues legends Junior Kimbrough and Fred McDowell, this is no po-faced retro show." That rough roots music gave way to a new stadium-ready blues sound that has spawned a generation of imitators. This is the defining record of the group's most artistically fruitful period, and a foreshadowing of the now ubiquitous popular sound they'd spawn.

Transatlanticism by Death Cab for Cutie

Transatlanticism was the album that broke Death Cab for Cutie into the big-time. It came with a perfect storm of press for the band — an earlier song was featured on The O.C. and Ben Gibbard's Postal Service record Give Up was a surprise hit. All of that set up Transatlanticism perfectly, and it delivered. It's the band's best record, an epic and beautiful album about distance and love.

The A.V. Club appeared to agree in their review of the album, calling it "a lush, impeccably produced, musically adventurous, emotionally resonant" album that "surpasses Gibbard's other career high points, which is really saying something." Though the band was rocketed to mainstream popularity following that record, they have yet to do something as good since.

It was a tumultuous road that led up to the release of Wilco's fourth album: Their then-label, Reprise Records, dropped the band, so Wilco made a bold move. They bought the rights to the record, streamed it on their website and finally gave it an official release in 2002 on Nonesuch Records. The toil was worth it: Yankee Foxtrot Hotel was a critical smash and hit No. 13 on the Billboard 200.

Since, it's become a legend. Rolling Stone also sang the record's praises, ranking it the 493rd best album of all time. Rarely does anyone take such big artistic and business risks. Theirs paid off.

From a Basement on the Hill by Elliott Smith

The passing of Elliott Smith was hard to take. He was a rising star who was seeing his potential recognized even as he expanded his horizons. When he died from seemingly self-inflicted wounds, he had one record left. This posthumous release was a fitting tribute that turned out to be one of his more commercially successful releases, charting higher than his previous work.

Pitchfork retrospectively lamented the loss, rating the posthumous release From a Basement on the Hill an 8.4. It was the masterful work that, in light of tragedy, brought Smith's music to the wider audience it deserved.

Turn On the Bright Lights by Interpol

It was impossible for Interpol to avoid the Joy Division comparisons early in their career, but over the past decade the comparison isn't just about their sound so much as it is their influence. Interpol is one of the defining acts of the New York sound, that angular rebellious movement that launched a thousand indie bands. But Interpol was so much more than the sum of their influences, and this album signaled them as a young group more than ready for their legendary status.

Modest Mouse's fourth album was spearheaded by the infectious, Grammy-nominated single "Float On," with its unforgettable lead guitar line and Isaac Brock's experiences of warped serendipity. He told the A.V. Club of the track, "I was just kind of fed up with how bad shit had been going, and how dark everything was, with bad news coming from everywhere. Our president [George W. Bush] is just a fucking daily dose of bad news! Then you've got the well-intentioned scientists telling us that everything is fucked. I just want to feel good for a day."

In their review, the A.V. Club said of the record, "The songs still rely on Brock's echoing guitar patterns and Mobius-strip lyrics, delivered in the voice of a harried, hip-hop-inflected square-dance caller, but though the vehicle stays the same, the scenery outside the window changes considerably." The album's success made Modest Mouse one of the most unexpected major breakouts in Indie music.

Country had been the sound of Texas for long enough when the post-rock scene began to develop, and Explosions in the Sky emerged as its obvious and jubilant leader in the early 2000s. An all-instrumental rock band wouldn't usually catch ears the way The Earth Is Not a Cold Dead Place did, but a combination of the record's brilliance and the inclusion of "Your Hand in Mine" in the hit film Friday Night Lights certainly helped. The movie provided a fittingly dramatic setting for the song's dramatic scope.

Bows and Arrows by the Walkmen

"When I used to go out, I would know everyone that I saw / Now I go out alone, if I go out at all," a pained Hamilton Leithauser sings on "The Rat," musing on an on-and-off relationship. This vulnerability, paired with the Walkmen's raw indie punk aesthetic, led to the band's instant relatability. Over the course of five more records, the Walkmen became elder statesmen of indie rock, balancing an incisive lyrical sensibility with some of the most authentic sounds in American rock. The band was successful enough to launch Leithauser's solo career.

You Forgot It in People by Broken Social Scene

Broken Social Scene is less a band and more an amorphous collective that ranges from six to 19 of the most talented people in indie rock. The band's influence extends well beyond its own output — its members also make up Do Make Say Think, Feist, Stars and Metric. With all these disparate influences involved, their kaleidoscopically beautiful second album should be unsurprising. The BBC was into the record, which they called "absolutely, utterly essential."

Summer in Abaddon by Pinback

In the Hebrew Bible, Abaddon is akin to a sort of hell, and for any creative profession, the worst type of damnation is creative stagnation. If that's how Pinback felt during these sessions, it doesn't show. This is quite simply the model of indie pop auteur — every song is meticulously constructed and tightly interlocking.

"Despite the tremendous metaphysical weight they carry, the songs glide by with an unhindered fluidity, verses unceremoniously giving way to choruses and back again," Pitchfork writes in their review. "If the album is the product of wasted time, it does not reflect that waste. And therein lies the knotty paradox at the heart of Summer in Abaddon: Pinback's darkest hours have inspired their finest moment."

This is the album that truly introduced the world Yeah Yeah Yeahs in 2003. It also gave us "Maps," the premiere Rock Band jam that is, arguably, one of the most powerful songs on the soundtrack. The record was produced by indie rock mastermind David Sitek of TV on the Radio, and it firmly established Karen O as one of our generation's greatest songsmiths and most enduring, charismatic personalities. Years later in 2015, she has become such a cultural fixture that she performed at the Oscars.

Thunder, Lightning, Strike brought stylish sampling fully into indie rock, so much so that it actually had to be remixed to avoid copyright issues when it was rereleased in the U.S. The group's first album muddied the water on when samples actually become original (and unbelievably catchy) music, setting a precedent for sample-heavy non-rap bands of the future. This is the model to follow — not Robin Thicke's. Go! Team brought a playful, danceable edge to indie rock.

Genres make everything easy, but the "dance-punk" moniker bestowed on Death From Above 1979 unfairly puts them in the same territory as LCD Soundsystem. It's not an unflattering comparison by any stretch, just an inaccurate one, because the Canadian duo rocks harder, in the Black Sabbath sense, than James Murphy ever has. In fact, they were one of the best contributions to metal that indie music has to offer.

Not only is this not dance-punk, but Stylus magazine went as far as to say of the album, "Take the pop from Guns 'N Roses, take the pomp from Van Halen and take the piss out of uber-serious nu-metal and you've got one of the most inventive metal outfits in recent history." It's still true.