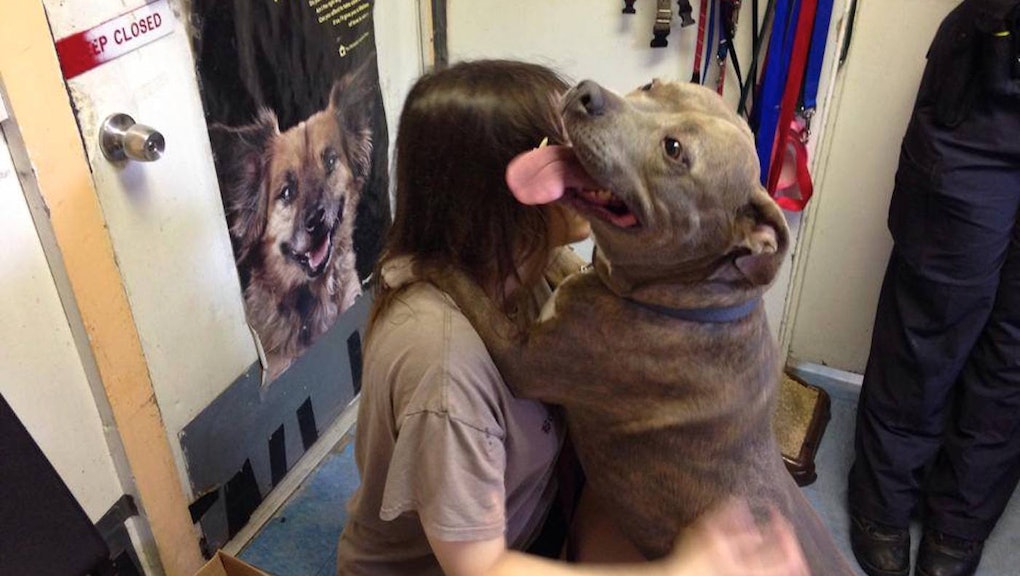 Meet the Most Dangerous Pit Bull on Earth

Pit bulls are perhaps the most misunderstood dog in America, and one pit bull and her owner are on a mission to change that.

The public perception continues to be that pit bulls are innately aggressive killers — a stereotype that has driven cities to enact bans against owning or breeding them, and some shelters to euthanize abandoned pit bulls rather than allow adoptions. Many experts and owners insist society has the wrong idea about the breed, which is why Maura Porter and her pit bull, Blueberry, are fighting to change people's minds. Their grassroots effort, documented on Facebook, has grown to 20,000 followers and counting as people from all over the world join their mission to shatter the stigma against pit bulls.

Porter never spent much time around pit bulls before she started volunteering at the Milton Animal League. The shelter sits on the edge of the Massachusetts Blue Hills, a large park space in the center of Boston where a lot of dogs are abandoned, many of which are pit bulls.

While volunteering, Porter decided she wanted to adopt one of the animals. She had a friend, dying from cancer, who was visited by therapy dogs as he prepared to say goodbye. When he passed, Porter and her husband decided they wanted to do something to help other patients like him. Porter brought home a number of dogs in order to learn their temperaments before choosing one that few people might: a 7-year-old pit bull named Blueberry.

Few pit bulls are lucky enough to have an owner like Porter. About 3.9 million dogs go through animal shelters in a given year, and a majority of them are pit bulls — even though the breed makes up a small (if uncertain) percentage of the general dog population in the U.S. Up to 93% of these sheltered pit bulls are euthanized before ever being put up for adoption. More than 800 cities have restrictions or outright bans on them. In part because of the negative stereotypes about pit bulls, people don't want them, people are afraid of them — and innocent dogs suffer.

All this despite the fact that the American Temperament Test Society, which measures dogs' dispositions, finds that pit bulls have some of the best attitudes of any breed. That means they show fewer aggressive or panic-avoidant behaviors than a golden retriever or collie.

The ASPCA says it's not pit bulls' innate nature so much as their bad reputation that attracts unscrupulous owners who want to turn these dogs into something they're not — mainly, canine gladiators. That, in turn, fuels the stereotype.

After a series of certification tests and behavioral trainings for Blueberry, Porter and her husband applied for her to visit at a therapy center outside of Boston that worked with mentally delayed adults. She was rejected; staff said they didn't want a pit bull in their program.

"I was like, you would never want anyone to judge your students based on how they look, but you're doing that to my dog," Porter said. "You are looking at her and saying based on her breed, she's incapable of [visiting with your students]."

"All I needed was to get in the door, I knew if they met her they would love her," Porter said.

Eventually, Blueberry found a place with Dog B.O.N.E.S., a service that provides therapy dogs to those in need.

And now, Porter and Blueberry are having a transformational impact. Every week, they visit with people who have terminal illnesses and severe disabilities, who are at the end of their lives or are just going through rehab. In total, Blueberry has visited with hundreds of people undergoing difficult moments in their own lives. Porter has been documenting the visits on Facebook, and now calls Blueberry the "pit bull therapy dog changing minds one visit at a time."

We went to the upstairs common area [of the rehab hospital]. A woman was visiting with her husband. She looked up and saw Blueberry ... and asked what kind of dog she was. She recoiled in fear when I said 'pit bull'. Then she stuttered, "I never thought that they could do this — never thought they were nice — that I would pet one, ever. A pit bull, oh my a pit bull." Then she became Blueberry's PR agent, telling every person who entered the area that Blueberry was a "pit bull and amazing". When her adult granddaughter showed up she gave her the same line and the granddaughter said, "They are good dogs, Gram. I'm glad you finally get to see that."

Blueberry is now in high demand. In the aftermath of the Boston marathon bombing, Blueberry visited a number of local businesses when they finally re-opened to play with people and help ease their fears and settle back into regular life.

"[Blueberry] definitely makes an impact when she's there," Porter said. "She loves people."

It's time to end the stereotype.

Porter is on a mission to change the way America thinks about pit bulls. She wants more people to meet Blueberry, so she can help change their minds about the breed.

Meanwhile, their Facebook following continues to grow, as people rethink what pit bulls are really like. What began as 150 extended family and friends following along has grown into a community of 20,395 and counting, representing 35 countries around the world.

"If people are willing to put aside any biases they have," Porter said, "they would open up their whole mind to [not] judging anybody, whether human or animal ... based on how they look."

Blueberry's out spreading the word, one sloppy kiss at a time.