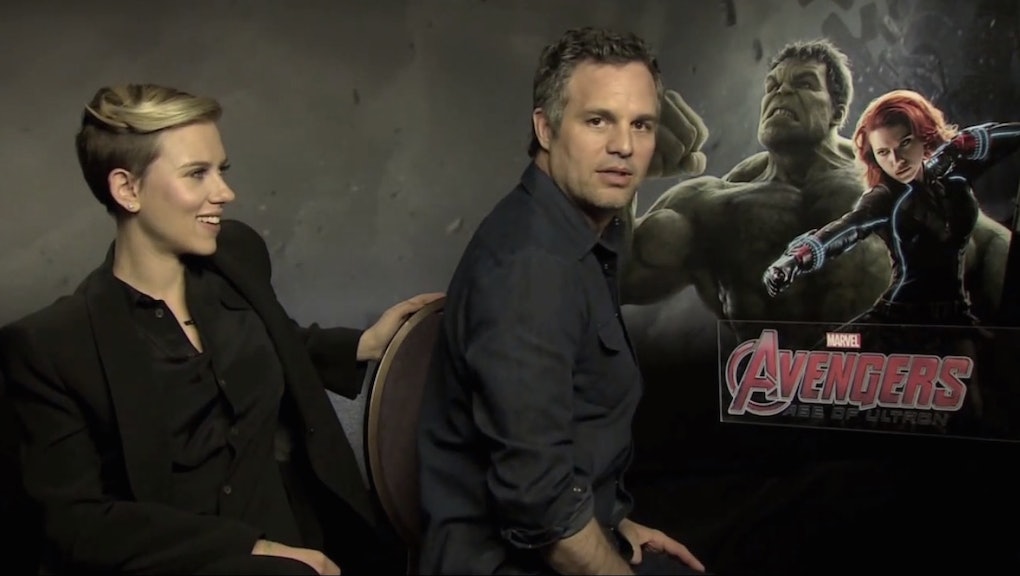 As long as there are press junkets and red carpet interviews, there will always be women getting questions about their appearances while men answer more substantive queries. It's the basis of the #AskHerMore campaign: Why are we just asking women about the superficial?

In a Cosmopolitan U.K. interview, Avengers: Age of Ultron stars Mark Ruffalo and Scarlett Johansson got a taste of what happens when you flip that script. Ruffalo had to answer questions about his red carpet fashion and slimming down for roles, while Johansson talked about her character and doing stunts.

The interviewer even slipped in a dig at the endless questions about makeup for women, playing off Ruffalo's intense green look as the Hulk.

She saved the two most powerful questions for Johansson. One was about how the star does her stunts, giving her a chance to pay tribute to her stuntwoman, Heidi Moneymaker. "That's her real name," she said with a smile. "And she's just incredible."

The other was about Johansson's work with the character of Black Widow, a mysterious woman who has grown since her first appearance in Iron Man 2 through three more films, including the spectacular Captain America: The Winter Soldier. Her best observation about Black Widow: Despite her shady exterior, she's an incredibly genuine character.

After this week's PR debacle for the Avengers team — when Chris Evans and Jeremy Renner called Black Widow "a slut" and "a complete whore" in an interview — this is refreshing. Stars with as big a platform as Johansson and Ruffalo can change the way we talk about and around gender. This kind of interview is far more progressive — kudos to Cosmopolitan U.K. for engaging these stars in a different kind of Q&A.