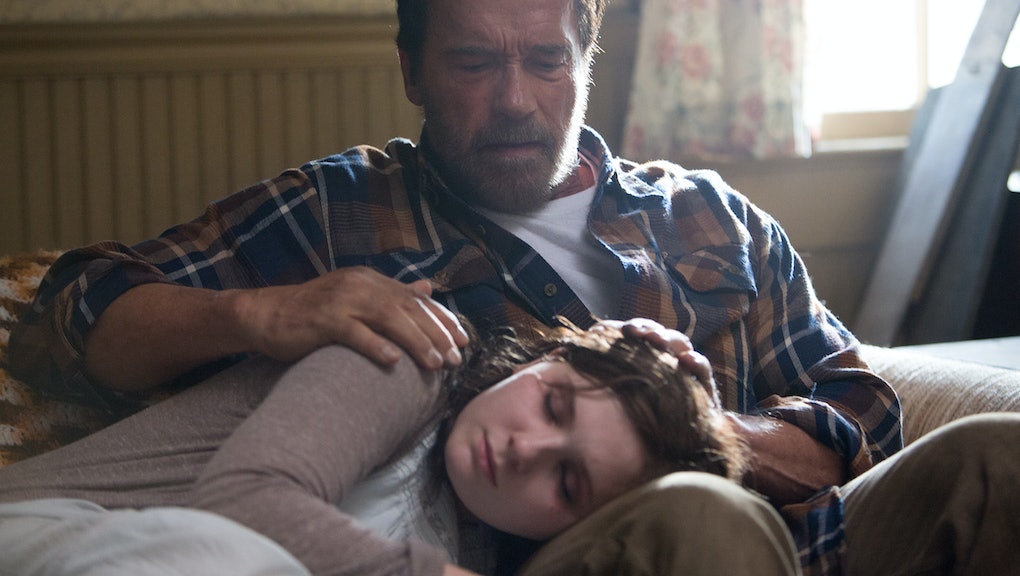 Arnold Schwarzenegger's New Zombie Movie Is Unlike Anything You've Seen Before

Arnold Schwarzenegger is in a zombie movie. But if you've got visions of the former "Governator" tearing through swaths of zombies with a gatling gun, you're in for a rude awakening. And if you think this is a comeback for Arnie that will take him back to his action-movie roots, you're dead wrong — or undead wrong, in this case.

Directed by Henry Hobson, Maggie is a deconstruction of the zombie flick. Wade (Schwarzenegger) is a father dealing with the infection of his daughter, Maggie (a terrific Abigail Breslin). She's succumbing to the bite from a zombified human and will quickly become undead herself. Most of the infected are quarantined, but Wade pulls a favor to spend as much time with Maggie as possible.

It's a powerful idea, taking the old principle of "one death is a tragedy, a million is a statistic" and applying it to the zombie movie genre. Instead of watching huge swaths of nameless characters get taken by the virus, only two major characters face it: Maggie and her friend Trent (Bryce Romero). This even gets used as a point of connection between the two teens, as they share a kiss after bonding over their infection.

Maggie's emphasis on the micro makes it a different kind of movie than its genre brethren. What would it be like for a father to have to decide whether to kill his daughter versus sending her to quarantine? How would a teenage girl like Maggie deal with the body horror of watching herself slowly decay? They're the little things a zombie movie with greater scope never gets around to exploring, and they're beneficial in making Maggie work.

Maggie isn't a perfect movie. Anything that isn't directly focused on Maggie herself — including and especially Wade's relationship with his second wife Caroline — drags a bit. Schwarzenegger is fascinating in his quietest moments, but he can't quite make the bigger moments work. The dialogue is terrible at times.

Yet there's plenty of good here. Hobson has created a vivid, just-missed-the-apocalypse world for these characters, and its central relationship is the heart. Schwarzenegger and Breslin have surprisingly great father-daughter chemistry; it's easy to get emotional, particularly in the film's final act.

If anything, even if Maggie isn't a huge success, it will hopefully inspire more movies to play with the conventions of their genre with surprising performances from huge icons. Did anyone think Jason Statham could be as hilarious as he is in the upcoming Melissa McCarthy movie Spy? That once seemed about as likely as, well, Schwarzenegger playing a quiet, emotional character in an indie zombie movie.