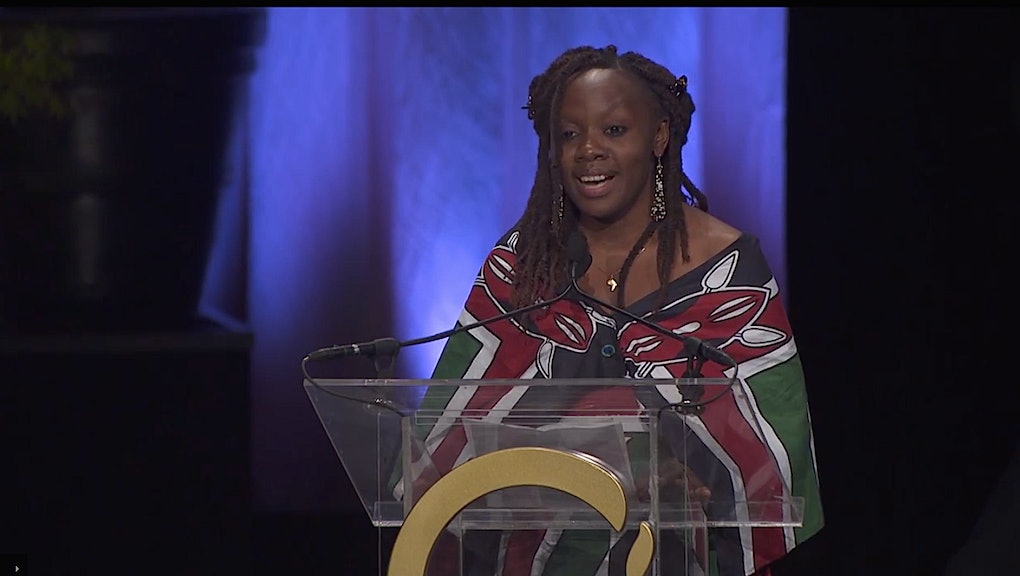 In 2009, Phyllis Omido experienced every mother's worst nightmare: Her young son, King David, who she was nursing, became gravely ill with lead poisoning. The cause? Her contaminated breast milk, the result of her work at a smelting plant in Mombasa, Kenya that was extracting lead from car batteries.

Omido is not your ordinary mother. She immediately channeled her rage against the factory into action through environmental activism. Her efforts led to huge results, including her winning the prestigious Goldman environmental prize on April 20 for single-handedly shutting down a lead smelting plant in Owino Uhuru, a highly-populated slum in Mombasa in Kenya.

Omido's struggle, activism and ultimate victory with no legal training have led many to dub her the "East African Erin Brokovich," the well-known American legal clerk and environmental activist who had a film made about her after taking on a huge utility company,  Pacific Gas & Electric, for poisoning the water of a small Mojave Desert town and making its inhabitants sick.

Omido's journey is an incredible story — one that deserves to be heard.

How it began:  The management of the plant where she agreed to reimbursed King David's medical bills if Omido signed a non-disclosure agreement. "She signed it, then immediately violated it," NPR noted. Having quit her job, she began a long endeavor to shut down the plant.

She began the fight by warning workers and residents of the dangerous toxic chemicals to which they were being exposed. Employees were outfitted with nothing more than flimsy cotton gloves that quickly fell apart and were never replaced, meaning they were often forced to handle dangerous chemicals with their bare hands. Upper-level managers making special visits, on the other hand, always had proper protective gear.

Many assumed Omido had been fired, however, and they interpreted her activism as the backlash of an embittered former employee. It was only after a fellow worker actually died from lead poisoning that people started listening.

Suddenly, Omido was flooded with inquiries and local support — and that's when the threats started. One night, upon her return home, two men were waiting to beat and kidnap her. "My son started screaming. I remember being hit at some point. I was thinking, 'Why can't he keep quiet?' Because I thought they might shoot him," Omido told the Independent. She was only saved because someone who was driving by stopped and came to her defense.

Omido and King David moved after the harrowing experience. It was around this time Omido was able to galvanize a real following but, despite their protests, nothing changed. Refusing to give up, in 2009, Omido took her activism a step further and started the Center for Justice, Governance and Environmental Action, an environmental and human rights lobbying organizations in Kenya.

While Omido was organizing a protest in 2012, she was arrested and charged "holding an illegal gathering and inciting violence," according to the Goldman Prize's website. A judge dismissed her case, and Omido immediately returned to her activism. In January 2014, the plant finally closed its doors.

But she didn't stop there. She's now holding Kenya's senate health committee to account, ensuring a similar injustice does not happen again.

Environmentalism needs more feminism. In a recent post on Medium, Wanjira Mathai, director of partnership on Women's Entrepreneurship in Renewables Hub at the Wangari Maathai Institute, argued the environmental movement in Africa desperately needs more women because they are the ones who bear the brunt of environmental degradation. Women and girls are required to travel farther for water when streams dry up or are contaminated and in order to gather wood after deforestation in their communities.

"In Africa and across the world, women's voices are largely missing from discussions about these challenges ?—?only 16% of countries report that they have considered the importance of gender in UN Framework Convention on Climate Change national communications," Mathai wrote.

There is, of course, the larger problem of exploiting Africa for its resources with little regard for its people. A report co-authored by UNESCO found "wastes generated by the mining industry contain high concentrations of metals and metalloids which can be mobilized, resulting in leaching into groundwater and surface water. Most of these heavy metals are highly toxic and are not biodegradable," making it extremely dangerous for any populations exposed to such contamination.

Systematic exploitation of the African continent is a pattern the world needs to acknowledge and address. In the meantime, increasing the number of women in the resistance against such oppressions is one step in the right direction, as they are so often the first to pay a price in war and environmental degradation.

In her acceptance speech for the Goldman prize, Omido drew explicit attention to the entrenched exploitation of the marginalized. She also ended on a note of optimism, saying she believed things were slowly starting to change for the better.

The movement's dearth of female voices and participation makes Omido's achievement all the more important. The consequences of her determination can have far-reaching implications, both in regards to better environmental regulation in Kenya and inspiring other women to hold reckless industries accountable.