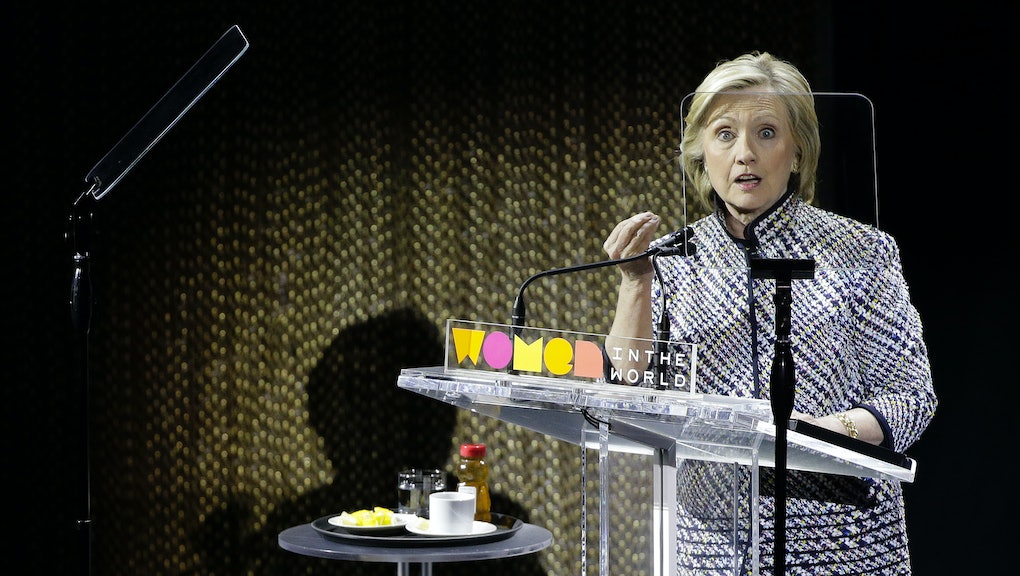 She's already promised to be a "champion" for "everyday Americans," but Hillary Clinton's energetic Thursday night speech to a very friendly audience at the Women in the World Summit had a more ambitious tone. "Women's rights are human rights," Clinton said to excited applause, re-upping the declaration she first made in China two decades ago.

Clinton's remarks were greeted by more than 2,000 civilian attendees and a traditionally news-hungry press horde with dozens of reporters desperate to hear a controversial word or sniff out a loaded subtext. Alas, the speech seemed to pass without much of either. It was distinctly feminist, as Slate noted Friday morning, but broad talk of women's rights, much like Clinton delivered in New York, no longer fuels partisan fire.

Controversy! By mid-afternoon Friday, the parsing had spun into overdrive. The focus was on one passage, about halfway through the speech, which seemed pretty squarely focused on global gender equality.

"We've nearly closed the primary gender gap in primary school, but secondary school remains out of reach for so many girls around the world," Clinton said, before running through her to-do list:

"Yes, we've increased the number of countries prohibiting domestic violence. But still more than half the nations in the world have no such laws on the books and an estimated one in three women still experience violence.

The takeaway, at least in a number of right-wing outlets and on a handful of mainstream sites, was that Clinton had made a sneaky argument for global abortion rights in the guise of "reproductive health care," and that those "deep-seated cultural codes, religious beliefs and structural biases" belonged only to anti-abortion Christians.

The conservative Daily Caller posted a story titled "Hillary on Abortion: 'Deep-Seated Cultural Codes, Religious Beliefs and Structural Biases Have to Be Changed.'" The Hill's account read into the comments with a similar interpretation: "Clinton: 'Deep-seated' beliefs block abortion access."

Of course, the candidate said no such thing. To start, Clinton never mentioned "abortion," despite the misleading headlines. And neither piece makes the case, let alone a compelling one, that she had intended to convey as much. The term "reproductive health care" is occasionally meant to encompass abortion, but if Clinton wanted to make that point without saying the magic word, she would have included the phrase "family planning," the preferred euphemism in political settings.

So, if you want to know whether Hillary Clinton believes that Americans who oppose abortion need to have their beliefs "changed," you'll have to ask her. Someone will. But there was nothing in her comments Thursday night that gives us any clear answer.