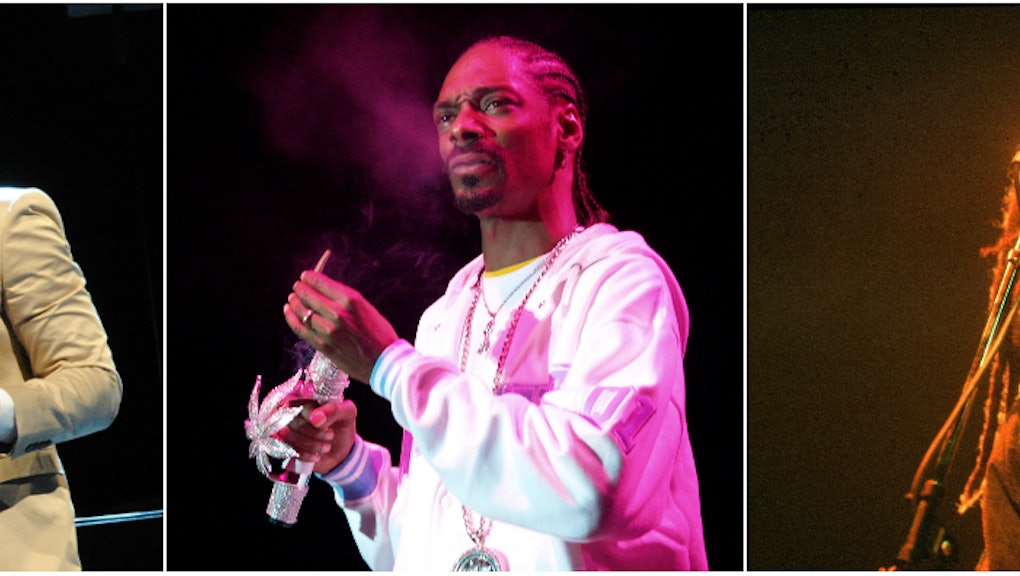 On April 20, 2015, rapper Waka Flocka Flame announced his intentions to run for president in 2016. The centerpiece of his campaign: weed legalization. "A blunt a day, it take the pain away," he explained presidentially.

Waka's campaign announcement was a joke, but his platform is not. A new national study released in March shows that for the first time in history, the majority of Americans support marijuana legalization. This is a necessary and rational shift; though science has proven repeatedly that weed has extremely positive medical applications, our country has refused to budge on the issue for decades. Now that's changing, and it's thanks in large part to our musicians speaking out on the issue. Here are the some of the icons that have helped turn the tide.

"There's no good reason to continue prohibition," John Legend told HuffPost Live in no uncertain terms in 2013. He offered his view on what the war on drugs really is: "It's really been a war on poor people, particularly a war on black people. It has not successfully reduced drug use at all."

Marijuana prosecution does fall unfairly on poor and minority communities, a tragic fact that has only "reinforced generations of poverty and disadvantage," as Vanita Gupta, top civil rights prosecutor for the United States Department of Justice, wrote for CNN in September 2014.

Willie Nelson is one of the legalization movement's elder statesmen. He's spent a lifetime singing about cannabis and supporting political candidates with legalization agendas. Nelson currently sits on the advisory board of National Organization for the Reform of Marijuana Laws, and has his own brand of weed products and stores on the way called "Willie's Reserve."

The country music legend is also the hero in one of the most impressive stoner legends of all time. In two of his books, he's admitted to sneaking up to the White House roof to smoke a "fat Austin Torpedo" with one of President Carter's sons. He claims at the time he wasn't afraid of getting caught, though he "should have been."

The media and media consumers get mad at Miley Cyrus for many things, but this quote should be one of her least contentious moments in the limelight. Numerous studies confirm Cyrus' assertions: There is scant medical justification for why alcohol is legal and marijuana is not. In an interview with Yahoo's Sunday Night, Miley claimed social media is also more dangerous than marijuana. "I have a 14-year-old sister and I go through her comments and people are calling her a slut, and that's a 14-year-old. So I think that's hurting your brain," she said. Looking at the startling incidents of suicide and depression associated with cyber bullying, Cyrus may have a point.

Snoop Dogg is America's quintessential stoner. As goofy as he seems with his jokes about wanting to smoke jays with Obama, he's actually been a powerful figure in the legalization movement. He's put a lot of money into a legalization infrastructure for marijuana, and as a public figure, he's helped the American public become comfortable with smoking weed as a viable recreational activity.

The Doggfather also has a knack for slipping serious legalization arguments into lighthearted banter: "If the government legalized weed, the crime rate would go down. People would just wanna chill," he said in a 2002 High Times interview. He's right about the crime rate, the cataracts (as quoted above) and the chilling.

Rapper 2 Chainz became a legalization icon when he debated marijuana legalization with talking head Nancy Grace on her show this past January. Grace worked hard to demonize the recreational marijuana community by showing videos of negligent parents offering weed to their toddlers, among other comically horrific stories. But 2 Chainz kept to the facts: "You can't use this case to define an entire community," he said calmly. He argued that marijuana legalization would not ruin communities and families on a large scale, the way Grace claimed. Instead, it would generate useful tax dollars, and keep minor offenders out of prison.

Most of his life, Marley spoke about the benefits of marijuana consumption on a spiritual level — arguments that generally do not hold much weight with legalization opponents. But he was absolutely right to compare the dangers of legal alcohol and the safety of the demonized "herb" in the above quote from a rare interview.

The deaths and illnesses related to alcohol are astronomical compared with the dangers of marijuana, according to statistics from the Independent Scientific Committee on Drugs. The brilliant music and transcendent quotes Bob Marley left behind have given the legalization movement both momentum and a face: Marley's name will adorn what may be the first global brand of legal marijuana products.

Back in 2001, Afroman authored one of the most ludicrous marijuana anthems, "Because I Got High." It played into all the stereotypes of the forgetful, brain dead stoner: "I was gonna go to class before I got high," he sang. However, in November 2014, Afroman reimagined his anthem to offer a more serious commentary on the legalization debate. "I had problems with glaucoma, but then I got high" is the first line of the new song. Every verse offers a well-thought-out justification for legalization, and Afroman's music has become fuel for the movement rather than a straw man standing against it.

Quote from "Because I Got High (Positive Remix)".

Killer Mike was born on 4/20, and that's a legacy he's borne out his whole life. He's consistently used his music to tell vivid stories that show how the prosecution of marijuana is ludicrous and racialized. On the Run the Jewels 2 track "Early," he tells the story of a man who is beaten and arrested in front of his family for a petty marijuana-related crime: "I said "Man, I'm tryin' to smoke and chill / Please don't lock me up in front of my kids / And in front of my wife / Man, I ain't got a gun or a knife / You do this and you ruin my life."

It's a harrowing story that rings all too true when you look the statistics. We need to keep marijuana prosecution from ruining black lives.

Diagnosed with breast cancer in 2004, Melissa Etheridge has experienced the healing properties of medical marijuana firsthand. As she wrote in an opinion piece for CNN, marijuana was never a part of her life before cancer, but it made her entire treatment process immeasurably better. Etheridge has since lent her voice to movements to legalize medical usage of the drug in several key states, including California and New York. "We can be the generation that makes the change," she wrote in the epic conclusion to her 2013 CNN piece. "Our great constitution challenges us to grow constantly. Let's put an end to marijuana prohibition and get clear regulations on the legal sale of pot. The benefits might surprise us."

In 2010, bassist Sting took a bold stance on marijuana legalization in a piece for the Huffington Post. He described the evils that draconian anti-weed policies are wreaking on our society. "Violent crime is thriving in the shadows to which the drug trade has been consigned," he wrote. "People who genuinely need help can't get it. Neither can people who need medical marijuana to treat terrible diseases. We are spending billions, filling up our prisons with non-violent offenders and sacrificing our liberties." It's the kind of enlightened stance that every public figure and artist who claims to love marijuana should be taking.

Now in the twilight of his career, Santana has reached that perfect don't-give-fuck wisdom stage that all aging icons seek. "I'm not afraid to say what I think," Santana told the AP, continuing the quote from above.

No artist should be. Public opinion about marijuana legalization is turning, and every artist that speaks out only pushes it farther along the spectrum towards truth and reason. Ending the war on drugs will make our country a safer, more equal and more prosperous place.

Quote from the Associated Press.