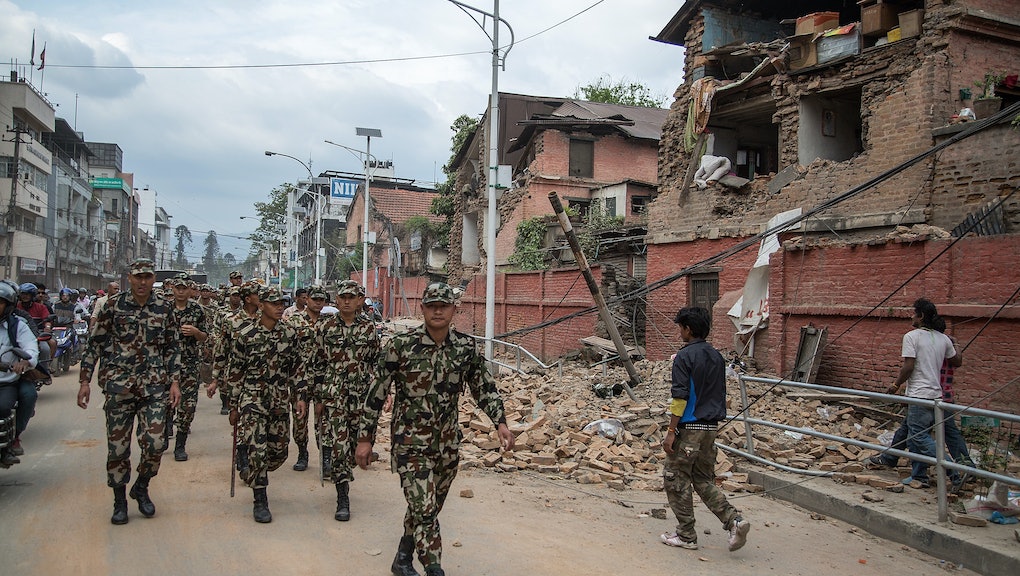 20 Devastating Photos of the 7.9-Magnitude Earthquake That Just Hit Nepal

At least 1,394 people are feared dead after a massive 7.9-magnitude earthquake shook Nepal on Saturday.

The BBC reports that the quake struck the area between the capital of Kathmandu and the city of Pokhara in the densely populated Kathmandu Valley. According to the BBC, Nepali Information Minister Minendra Rijal had relayed claims of "massive damage" from the epicenter of the earthquake, where many buildings collapsed. Nearly 500 were reported dead in Kathmandu alone.

The International Business Times also reported massive destruction at the UNESCO World Heritage Site at Kathmandu Durbar Square, a major tourist destination, as well as Dharahara Tower, a nine-story tower built in 1832 in the Mughal and European styles.

The following infographic from Al-Jazeera shows where the earthquake hit, as well as major population centers that were affected.

Photos taken at the scene seem to confirm the reports of terrible damage to the two cities, as well as major loss of life:

According to a United States Geological Survey report, "large earthquakes on the Himalayan thrust are rare in the documented historical era. Just four events of M6 or larger have occurred within 250 km of the April 25, 2015 earthquake over the past century."

Update, 5:50 p.m. on 4/25/2015: This story has been updated to reflect the increasing casualty count, which has continued to climb as search and rescue operations continue.

Additionally, The Guardian reports that the list of confirmed casualties now includes senior Google executive Dan Fredinburg, who perished of a head wound after an avalanche "swept through" Mount Everest base camp following the earthquake. More than a dozen people died at the camp as a result of the avalanche, which also resulted in numerous and severe injuries to climbers and others present.

Photos from the scene show devastation at the Nepali camp, which exists at an elevation of 5,364 meters and lacks reinforced structures.

According to Time, the avalanche flattened roughly 30 tents and an unknown number of people are missing. The Denver Post adds that two members of a Colorado climbing team remain stranded on the mountain, while others remain unaccounted for.