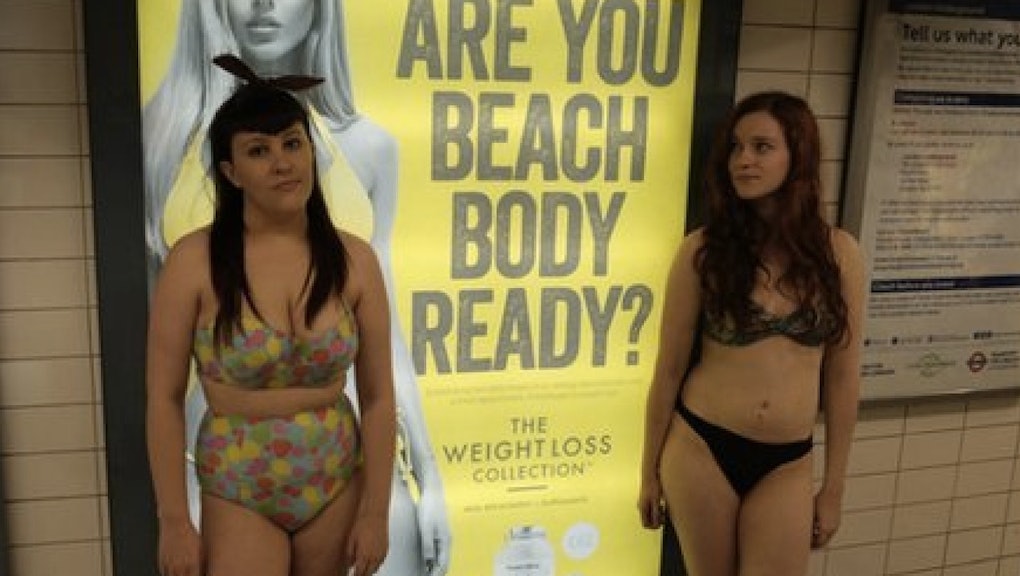 Commuters on the London Underground this month were treated to a series of advertisements for U.K. dietary supplement manufacturer Protein World, featuring their "weight loss collection" alongside an ultra-thin woman with the caption: "Are you beach body ready?"

The U.K.'s feminist community was less than receptive to this obvious shaming tactic greeting them whenever they attempted to use the train. The message, they said, was that women need to lose weight or be ridiculed for their size if they attempt to wear a swimsuit:

Over the course of the few weeks since BuzzFeed reported on the controversy surrounding the advertisements, Tube users began covering the posters with sticky notes, adding their own rebuttals in marker or just defacing them and posting the results to social media. The most prominent change was to change the wording of the ads to say #EachBodysReady:

Bloggers Fiona Longmuir and Tara Costello even staged a protest in front of one of the ads to demonstrate that they are always beach ready:

Others posted versions of the ad that appeared to be digitally modified:

... or simply made their thoughts known:

A Facebook group set up to challenge the ads called Eachbodysready also collected various images of the modified ads:

A petition to remove the ads set up on Change.org gathered nearly 40,000 signatures by early Saturday afternoon. According to an update from organizer Charlotte Baring, the Advertising Standards Authority (an advertising industry self-regulatory body based in the U.K.) has received so many complaints that it has requested users temporarily cease filing them, as the onslaught of objections has slowed down its ability to review the ads.

It turns out that Protein World really is as horrible as the critics claimed. When challenged on social media, the brand accused the women of having body issues and lamented that the U.K. has become a "nation of sympathizers for fatties":

It even retweeted this image suggesting that feminists were fat:

The brand even proudly proclaimed solidarity with #Gamergate, the online movement of trolls harassing female members of the game industry with death and rape threats:

BuzzFeed also caught company CEO Arjun Seth accusing one of the brand's female critics of having "a lot of issues" in a now-deleted Tweet:

Protein World claimed on Twitter that as a result of the protests, sales had "tripled" and it had nearly 7,000 new customers. Whoever was behind the account claimed to have received a bonus. In an interview with right-wing news site Breitbart London, Richard Staveley, Protein World's read of global marketing, claimed that he and Seth were behind the mean-spirited response to the criticism on Twitter and called the trolling "hilarious."