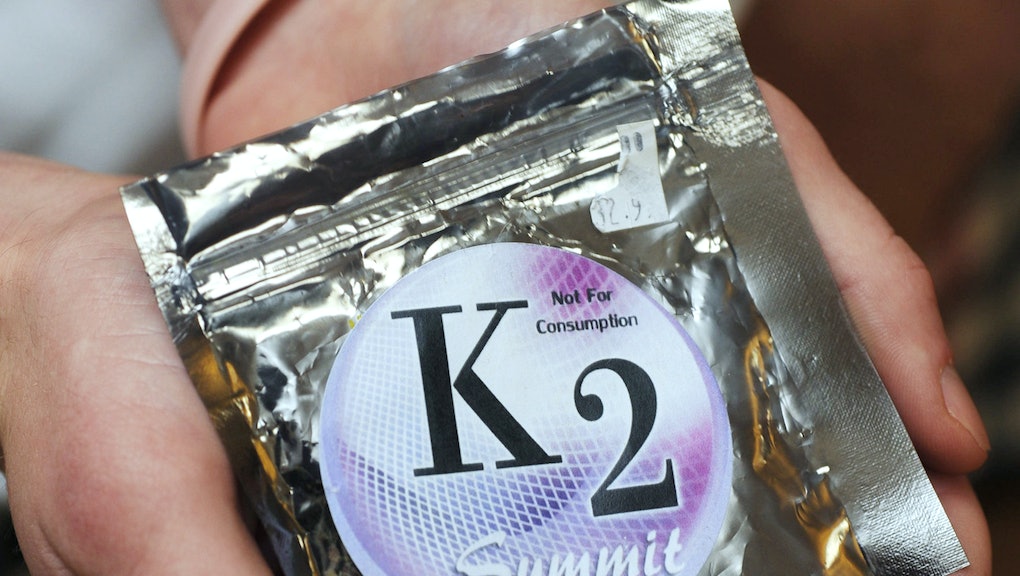 It's supposed to be like weed, but weed it isn't. A designer drug called Spice is being connected to a rise in emergency room visits across the country.

The New York Times reports that in the first three weeks of April, state poison control centers received "about 1,000 reports of adverse reactions to Spice ... more than doubling the total from January through March, according to the American Association of Poison Control Centers." On one day alone, more than 172 reports rolled in. Previous research has connected ingestion of Spice to strokes, while some users have died.

This isn't your daddy's ganja: While there are dozens of varieties, the type of designer drug in question is a synthetic substance meant to replicate the effects of marijuana. These synthetic cannabinoids are essentially attempts to brew something similar to the most prominent psychoactive ingredient in marijuana, THC, while avoiding the latter chemical's illegal status as a Schedule I narcotic.

According to Live Science, the resulting chemical is sometimes much more potent than even the dankest weed and a lot cheaper, appearing in convenience stores and online at prices much lower than real pot. It also does not show up on typical drug tests. These three factors go a lot toward explaining its popularity.

This stuff can be dangerous, to put it mildly. It's the marijuana equivalent of bath salts. The chemical compounds in question are often poorly understood substances that have not been adequately studied by experts. One of them, JWH-018, was originally synthesized by Clemson University researcher John W. Huffman in 1995. He told WebMD in 2010 that "Nobody knows anything about how these new compounds act in the human body. Anecdotal reports say they stick around in the body for quite a long time."

Spice makers attribute the drug's effect to its unique blend of herbs. But the Drug Enforcement Administration claims those herbs are actually sprayed or soaked with the questionable chemicals, which are "manufactured in Asia by individuals who are not bound by any manufacturing requirements or quality control standards." Last year, more than 100 people in Texas overdosed on a batch of poorly made product distributed by a Dallas supplier. Baylor Medical Center's James d'Etienne told WFAA-TV that patients arrived with "similar symptoms of psychosis, altered mental status, abnormal behavior ranged from very sedated to an agitated state."

According to the New York Times, while law enforcement has tried to control the flow of Spice, it comes "in hundreds of varieties; new formulations appear monthly, with molecules subtly tweaked to try and skirt the DEA's list of illegal drugs as well as drug-detecting urine tests." For example, Alabama banned one formulation only to see another return to store shelves soon after.

Why you should care: The supposed Spice craze shows some of the same characteristics as other drug war moral panics like the one surrounding the much-ballyhooed flakka, a form of synthetic cathinone (bath salt) linked to a series of bizarre incidents in Florida. Drug Policy Alliance nightlife community manager Stefanie Jones previously told Mic such stories can feed "existing paranoias and stereotypes about drug use and leads to knee-jerk type reactions from the public."

Still, potential users should be wary that whether it's marketed as K2, Spice, Black Mamba or something else, it is not marijuana — and it's far less safe. Since the only reason such sketchy alternatives are gaining traction is thanks to continuing marijuana prohibition, put spice down as another reason to support drug law reform.

"You have to ask if you're pushing people towards the scarier thing?" emergency room doctor Jeff Lapoint tells Forbes. "The answer is 'yes.' It's like prohibition where people made bathtub gin with methanol. We know people are going to use it. No athlete, soldier, student or parolee wants to test positive for THC. So they just go to the head shop and get the 'legal' kind."