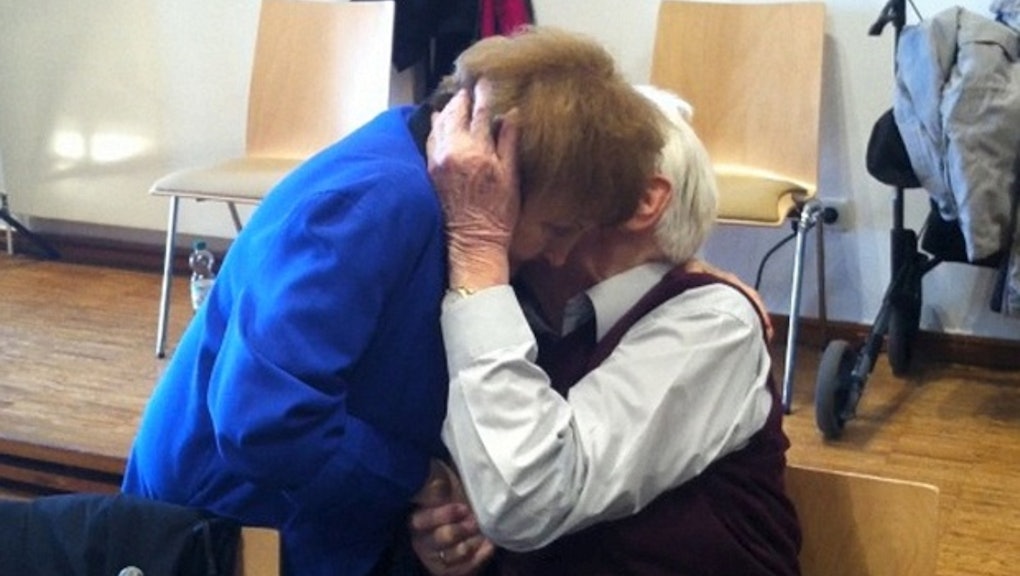 Here's something you don't see every day: an 81-year-old Holocaust survivor embracing a 93-year-old former Nazi who helped run the camp she was imprisoned in.

On Thursday, Auschwitz-Birkenau survivor Eva Mozes Kor uploaded a photo of her "face-to-face meeting" with former camp guard Oskar Groening. Groening, the Washington Post reports, is believed to have been a sergeant in charge of cataloging and valuing items taken from Jews and other people murdered in cold blood by the Nazi regime at the facility.

The hug: Groening is now on trial in Germany for complicity in the murder of 300,000 Holocaust victims, thanks to a 2011 court ruling that held accountable elderly Nazis and other World War II war criminals for their actions decades ago. According to McClatchy DC, the 93-year-old is one of the last accused Nazi war criminals alive.

Kor was present to testify against Groening, but upon meeting each other, oppressor and victim connected, however briefly.

On the Q&A website Quora, Kor described her decision to embrace Groening as the outcome of two factors. First, she wrote, Groening fainted the first time she introduced herself, and "this was not the interaction I was hoping for. I knocked out an old Nazi." The second factor was that she was "interested in what will happen when someone from the victims' side meets with someone from the perpetrators' side." Kor says she took the opportunity to ask Groening to denounce fascism to misguided neo-Nazi youth in Germany.

"As I was talking to him, he grabbed me and gave me a kiss on the cheek," Kors wrote. "Well, I probably wouldn't have gone that far, but I guess it is better than what he would have done to me 70 years ago."

In her testimony, Kor forgave the defendant but warned, "My forgiveness does not absolve the perpetrator from taking responsibility for his actions, nor does it diminish my need and right to ask questions about what happened at Auschwitz."

The background: Kor's close moment with Groening helps put an end to a tragic story spanning back over 70 years.

According to the Guardian, Kor told the court that she had only survived her time in Auschwitz-Birkenau because the infamous Nazi researcher Josef Mengele, well-known for his inhumane experiments on the camp's prisoners, hand-picked her to be one of his research subjects. Dr. Mengele selected her on the basis of his fascination with twins, as Kor arrived in the camp with her sister Miriam.

"Of our family, only Miriam and I survived because we were used in Dr. Mengele's experiments," she told the Guardian. "We became part of a group of twin girls, thirty sets of them aged 2 to 16 ... who were taken to a processing center where they cut our hair short and took our clothes away.

"Two Nazis and two prisoners restrained me [and] began heating a needle. When it got hot they burned it into my left arm. I got the number A-7063 and Miriam became A-7064," Kor continued. As the Guardian describes later, Dr. Mengele performed experiments on her that included having blood drawn from one arm and injected into the other along with a mysterious substance, as well as other cruel and demeaning tests.

Groening admits that he is "morally" culpable for the slaughter at Auschwitz-Birkenau but insists that he had no direct role in the mass murder, the BBC reports. If the court delivers a guilty sentence, then Groening may face between three and 15 years in prison, which could ensure that the aging Nazi will spend his last years in a cell.