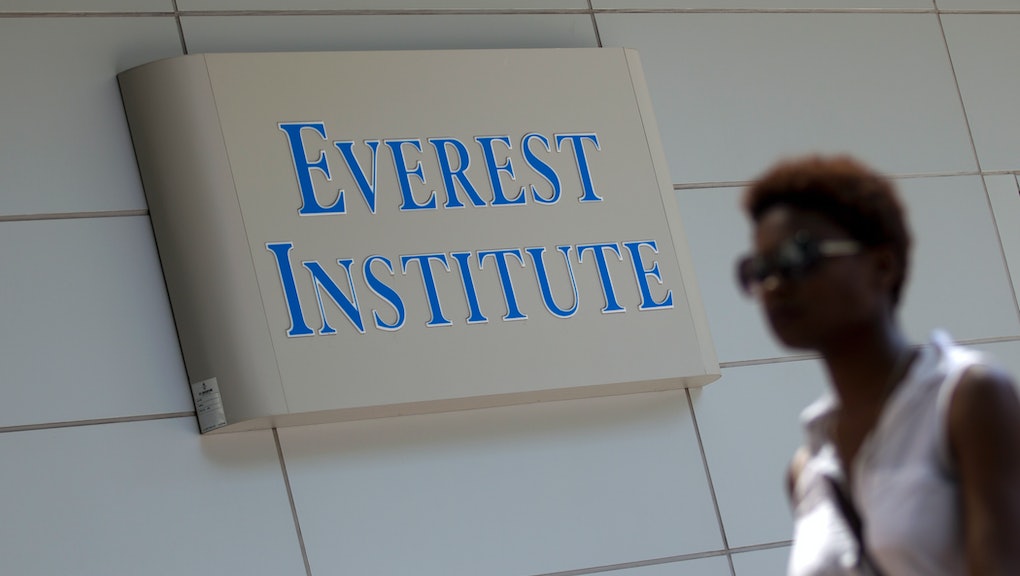 On Monday, Corinthian Colleges Inc., formerly one of largest for-profit operators of colleges in the United States, shuttered its last remaining campuses, leaving about active 16,000 students out in the cold. The closure marks the final act of a slow-motion disintegration that began last year and concludes one of the biggest collapses in the history of American higher education.

The downfall of Corinthian has been in the making for even longer. For years, the California-based corporation has been under investigation for a host of exploitative practices at its colleges, including predatory lending, deception in performance data and job placement placement rates, and bogus career services.

"What these students have experienced is unacceptable," federal education undersecretary Ted Mitchell said in a statement. "We will do everything we can to ensure that Corinthian makes good on its obligations to students and taxpayers to the extent possible."

For many, however, the Education Department's actions have been too little too late.

The background: The federal government has been taking action on Corinthian since last year. Last summer, the Department of Education finally decided to cut the cord by severing federal student aid for its colleges. Unable to keep afloat without the federal funding, Corinthian was forced to begin selling and closing its campuses nationwide. Earlier this month, the federal government fined Corinthian $30 million after confirming hundreds of cases misrepresentation of job placement rates.

Corinthian's abuses led to the emergence of a movement known as the Corinthian 100, a group of students who are refusing to pay back their federal student loans on the basis that they shouldn't have to repay loans that were taken out to finance a fraudulent degree. The movement has grown since its formation, and earlier this month organizers met with officials from the U.S. Consumer Financial Protection Bureau, the Department of Education and the Department of Treasury to negotiate discharging their federal student loans.

Corinthian students have poor prospects: The 16,000 students who were affected by the final campus closures have two main options, and neither of them seem to be appropriate compensation for  victims of fraud left out in the cold without being able to complete their programs.

As Chris Kirkham reports at the Los Angeles Times, given the abrupt closing of their campuses, they should be eligible to have their federal student loans discharged, after which they would then begin from scratch at another institution. Or they could attempt to transfer elsewhere, which, given the "nontraditional accreditation" of many of their colleges and the disrepute of a Corinthian degree, will likely prove extremely difficult. Regardless of the route students choose, it's clear that most have lost time and effort that they won't be able to get back.

But for most students defrauded by Corinthian, the path is still shrouded in darkness. A majority of its former students are not eligible for a full discharge under the guidelines that most the final 16,000 are, mainly because their campuses were sold to another company. The Corinthian 100 are among those former students, contending that they should be eligible for a mass discharge of their federal loans.

"Corinthian Colleges was not a school chain but a fraud factory, propped up by the Department of Education and taxpayer money for far too long," the Debt Collective, the organization backing the Corinthian students refusing to pay back their loans, said in a statement to Mic. "The time has come for the Education Department to do the right thing. The closing of these campuses is just another step toward the full discharge of current and former Corinthian students' debts."

A group representing the Corinthian debt strikers is set to meet with the Education Department in May to discuss discharge terms.