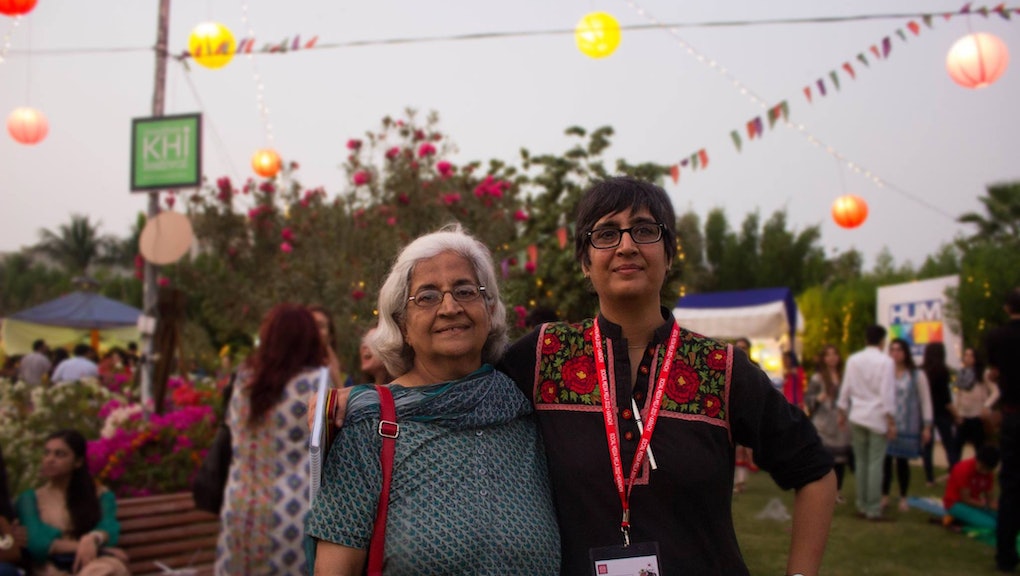 When I found out my friend and social activist Sabeen Mahmud was murdered on the evening of April 24, I was in a state of shock.

I first saw an article on my newsfeed featuring a photo of her: I smiled and clicked on it, not reading the headline. I thought it was a mistake or I had misread, so I read the headline again and again and searched other news outlets, until the weight of the reality sunk in.

I had lost a new friend, someone I deeply admired. This was also a blow to the waning progressive movement and a massive loss for Pakistan. A vacuum has been left in her absence, and given how unusually intrepid she was in the face of violent oppression, it is not likely to be filled.

My friend: The last time I saw Sabeen was almost exactly a year ago one evening at a courtyard café in Karachi, for the kind of endless coffee date that can be measured in the day's phases. The hours were filled with meandering conversation, laughter and our shared love of Aaron Sorkin. It was the kind of spontaneous evening that Sabeen loved. "Spontaneous plans that transpire are so good," she wrote to me after we parted ways.

Her spontaneity and playfulness stemmed from her fearlessness and an unadulterated joie de vivre, powerful qualities that allowed her to find hope in practically any situation, no matter how bleak. But it was also her fearlessness that Pakistan's various rampant extremists found so threatening.

On April 24, as she was driving home with her mother from an event Sabeen hosted called "Unsilencing Balochistan" about the unspoken civil war being waged in Pakistan, armed gunmen on a motorcycle pulled up to her car at a traffic light and shot her four times at close range. She most likely died instantly and was pronounced dead on arrival at the hospital. She was 40. Her mother was shot twice but survived the attack.

Sabeen's last tweet was less than an hour before she was shot, an Instagram photo of the event she had just hosted.

Most of the world doesn't know about the decadelong Balochistan conflict, in part because the Pakistani government has done an impressive job not acknowledging it and threatening or killing those who speak about it. In fact, an event on the same subject was canceled at a Lahore university weeks earlier after organizers allegedly receiving threats from Inter-Services Intelligence, the country's intelligence agency. Sabeen had also been receiving threats in the run-up to her talk, but she decided to persist.

The event's Facebook page boldly read, "Despite the plurality of opinion, very little space seems to be given to the discussion in Pakistani mainstream media or academia; the debate seems to be shut down before it can even begin."

The discussion was explicitly framed around the government's alleged systematic killing of Pakistanis who dissent on the issue. One of the speakers, Mama Qadeer, started the organization and movement Voice for Baloch Missing Persons, in which he demands accountability for "Balochistan's 'disappeared,' a term used to describe people who have been abducted in Balochistan, with their bodies often found years later," according to Al-Jazeera. Up to 21,000 Baloch people have gone missing to date, claims Mama Qadeer.

Transparency in a culture of opacity. Sabeen founded and was the director of the Second Floor (known to locals as T2F), an inviting space with a gallery and "countercultural" room on the first floor and a café on the second.

When Sabeen first had the vision for this space, the major hurdle was a lack of funds. But when an uncle in London transferred $9,400 for future health care costs her grandmother might incur, she had an idea. '"So I told my grandmother what I was planning to do,' Mahmud later wrote," the New Yorker explained in its tribute to her. "'And [I] assured her that if she fell ill, we'd give her a triple shot of espresso that would either cure her or kill her.' With her grandmother's blessing, she opened the Second Floor."

The café — complete with board games and graffiti-covered walls festooned with bright, cheeky postcards — offers young people a safe place to sit for as long as they like, to study, work or socialize. The space's shared tables and convivial atmosphere foster trust and curiosity; it is one of the few places people can go where they feel safe engaging in political and social discourse in a country otherwise wracked with paranoia. The gallery space is often used to host everything from musical performances to rigorous intellectual debates. Its openness is the best kind of subversion in a place like Pakistan, and the spirit of Sabeen's character can unequivocally be felt in every detail of T2F.

Given how rife gun-related violence is in Karachi, it is not uncommon for establishments frequented by the elite to have an armed guard at the entrance. Much to said elite's consternation, Sabeen refused to follow this trend at T2F. She was adamant the space be egalitarian and open, in every sense of the word.

"Fear is just a line in your head. You can choose what side of that line you want to be on ... Things are dangerous and bad things happen. But you can't let fear control you, you'll never get anything done," Sabeen told Wired in 2013.

Reaction to a murder: Pakistani progressives, including social activists, civil rights activists, lawyers and defenders of democracy, are outraged, taking this assassination personally and organized protests for April 28 across the country, four days after Sabeen's death.

"Students, activists, journalists and members of various organizations have come together to demand justice for Sabeen and are speaking out against the trend of silencing people who 'dare to ask questions,'" reported the Express Tribune.

Protests were organized for the three main cities of Islamabad, Lahore and Karachi. In the capital of Islamabad, people gathered outside the National Press Club and demanded the preservation of a diminishing civil society. "Pakistan is defamed because of [the] murder of Sabeen not because of the seminar on Balochistan," human rights activist Marvi Sirmed said at the rally.

"As much as she was loved by those she helped, she was feared by those she stood up to," an old schoolfriend, Adeel, wrote in a private Facebook homage that captured Sabeen's spirit. "Her approach to engaging violent, religious and political extremists who would happily see her killed was powerful. Here was an articulate woman who could invite aggressive, activist mullahs from politically active mosques over to her café for a cup of tea, put everything on the table and have an open discussion on every issue of dissent while looking them straight in the eye."

This type of transparency is unusual enough for Pakistan, let alone coming from a woman. Adeel went on: "Her intellectual and moral honesty, disarming nature and articulate packaging of her ideas often softened the hatred of her enemies.  She was a threat to them because if she could almost convince them to change their minds towards moderation, imagine what she could do to the thousands she reached ..."

Right after the Taliban's massacre at a Peshawar-based school last December, Sabeen immediately flew to the site to offer help for victims and survivors.

The silent war: Balochistan is the largest of Pakistan's four provinces but also the poorest. Many of its inhabitants are angered by the country's wealthy exploiting this resource-rich region, with little of the profits returning to the province itself. This is a large part of why separatists have been fighting the government with renewed vigor for independence over the last decade.

The assassination of Akbar Bugti, a Balochistan nationalist leader and former chief minister of the region, in 2006 by then-President Pervez Musharraf, threw flames on the fire and resistance to the government subsequently intensified.

When people think of internal conflict in Pakistan, they are quick to turn to the tribal regions up north, overrun by gun-toting Taliban militia who take advantage of the porous Pakstani-Afghan border. But the covert war being fought in Balochistan is in some ways more difficult to manage. The central government has made strides in mitigating the northern Tribal region's autonomy and connecting it to the rest of the country, but they have done little to manage the conflict in Balochistan other than target anyone deemed incendiary and suppress the separatist movement with a covert counterinsurgency.

In addition to the usual suspects of religious fundamentalists, there has been speculation in Pakistan the ISI or some rogue elements within might have connived in Sabeen's assassination, in just another example of how murky and conspiracy-ridden the country has become. Given this possibility, the military's insistence on assisting the investigation of her murder feels uncomfortable, at best.

Continuing her fight: It is incumbent upon us to carry on her resistance, to demand social justice no matter the country, so Sabeen does not die in vain. Pakistanis must endeavor to brazenly tear down the scaffold of oppression, until Pakistan becomes a place where a humane, loving woman, a true patriot, isn't shot in her car for simply facilitating a discussion.

On April 27, I went to a memorial for her organized in Fort Greene Park, New York. About 100 people surrounded a display of her photos that mourners adorned with candles and flowers. I was surprised to see how many people who were not part of the Pakistani diaspora showed up. I fear Sabeen was too humble a person to know the extent of her impact reaching halfway across the world.

"She brought forth glimmering dialogue on music, literature, art, poetry, culture and identity. In a place which was bereft of it. She taught me to find hope even in that abyss. And I'm sure she didn't do any less for her friends just like me," Zainab Jabbar, her longtime friend, wrote to me the day after Sabeen's assassination.

"Mahmud is being remembered for her fearlessness, but her friends say that what motivated her daily bravery was love," the New Yorker wrote, in a similar sentiment.

Because T2F, both as a shared space and forum for debate, tends to be more accessible to the Pakistani elite, I once asked Sabeen if she ever felt like she was preaching to the choir.

"Oh, absolutely," she said, flashing a smile. "But someone's still gotta teach the choir how to sing."