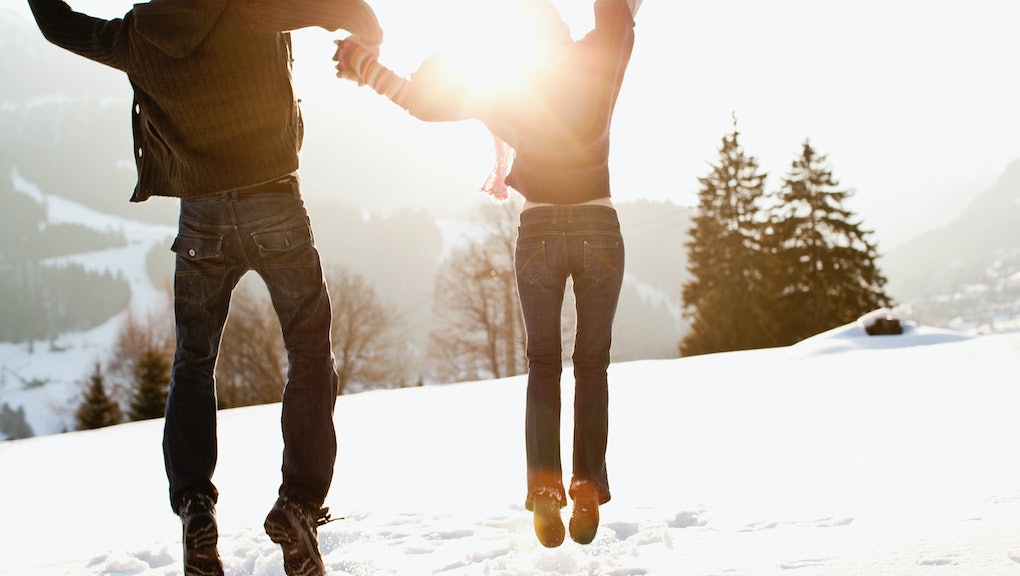 The results from the 2015 World Happiness Report are in: Switzerland is the happiest place on Earth.

Comparing data from 158 nations, the annual report analyzed six factors related to well-being, such as GDP per capita and life expectancy, and also social support and generosity, two factors that, as Bloomberg View noted, "are relatively independent of economic development or the political system."

Instead, such factors reflect the quality of interpersonal relationships. As the study authors write, a country is happiest when its people engage in "the sometimes risky but deeply rewarding giving relationships with others."

So Mic probed into dating customs, marriage stats and sex lives of the land of chocolate, snow-topped mountains and cuckoo clocks to find out: What makes the Swiss tick?

The Swiss wait a little longer to have sex.

The average age the Swiss lose their virginity is 18.2, according to the Durex Sexual Wellbeing Global Survey. Americans, on the other hand, start at 17. Something tells us that extra year and change of maturity can't hurt.

But once they start, they have lots of it.

The Sexual Wellbeing Global Survey also found that the Swiss average sex 123 times a year, compared to the global average of 103, as reported by Swiss Info. That means a little more than two times a week. While there is no amount of sex that is "normal," a healthy, active sex life can go a long way for relationship satisfaction. Previous surveys indicate that the happiest couples have sex about two to three times a week. You're hitting the mark, Switzerland. Maybe it's all that chocolate.

In Switzerland, you show up to a date on time.

Punctuality is a huge part of keeping up with social graces in Switzerland. Whereas in the United States, we often give our late dates the benefit of the doubt (the subway sucked!), showing up on time means a lot over there. "People are also expected to show up on time for social outings, whether it's dinner at someone's house, drinks at a bar, or a party," Switzerland-based writer Catherine McLean wrote in the Local.

As one poster on Futurescopes noted, the Swiss tend to be at least 15 minutes early for appointments. For a country particular time obsessed (about 87% of their trains arrive within three minutes of their scheduled time), punctuality is important.

But when it comes to getting intimate, they take it slow.

The Swiss aren't overly forward in new relationships. Trea Tijmens, the first certified matchmaker in Switzerland and founder of SuccessMatch, told the Local, "The Swiss are the nicest people but perhaps not the most outgoing or spontaneous upon first encounter or chatty to complete strangers."

That means they also steer clear of TMI. "They tend to be quiet and discreet when they first meet you, so don't tell them your whole life story or ask probing questions about their family or job," noted McLean. According to the site Expatica, Swiss men tend to be a little reserved, so Swiss women are encouraged to initiate dating.

Swiss couples aren't in a rush to find their spouse.

According to federal data from 2013, the average age of first marriage in Switzerland was 31.8 for men and 29.6 for women. That figure has remained consistent over the last couple years, indicating that the Swiss play it a little more safe when it comes to commitment. In the United States, the median age of first marriage comes at 27 for women and 29 for men. That long lead-up might work well in their favor — according to studies done in America, when women postpone their vows until 30 or older, they stand to gain huge benefits like higher salaries and lower divorce rates. (Not to mention, their average age of first birth is about four years after the United States.) For once, it's OK to be picky.

In Switzerland, family is everything.

The Swiss are very family oriented, Tijmen added, so successful relationships prioritize home life over work life. That can be a challenge for women who aim to balance motherhood with careers. But as society becomes more gender equal, Swiss families have become more egalitarian than ever: "Swiss fathers play a more active role in looking after their children than many of their European counterparts," a report by the Social Issues Research Center found.

But they keep their families small.

In Switzerland, families stay small; the fertility rate in the country is 1.5 births per woman, lower than most other European countries and the United States, according to the Organization for Economic Cooperation and Development. Tight-knit families where everyone's involved? Sounds pretty happy to us.

That type of egalitarian mindset pans out well in the dating world.

A 2013 study from the Department of Psychology at the University of Zurich studied a group of women in romantic relationships with either women or men. The researchers found that lesbian women "reported receiving better support from and experiencing less conflict with their female partners," and the same-sex partners were also more satisfied in their relationships. Today, Switzerland allows registered partnerships for same-sex couples, and legislation to legalize same-sex marriage is now moving through the upper chamber of the Swiss Federal Assembly.

The Swiss hang onto real connections.

As the Swiss may take a little longer to warm up to one another, many make romantic connections through friends. "From my experience it's usually through friends of friends," Reddit user P1r4nha said.

"Just get friends," added another Redditor, remember_who_you_are. "Connections in Zürich are important. If you've got connections, meeting new people or just looking for a hookup will be much easier." They may have a point: Those who meet through their community (yes, friends of friends), feel stronger ties in their relationship and feel greater support from their social network.

And as the World Happiness Report found, it all comes down to happy relationships.