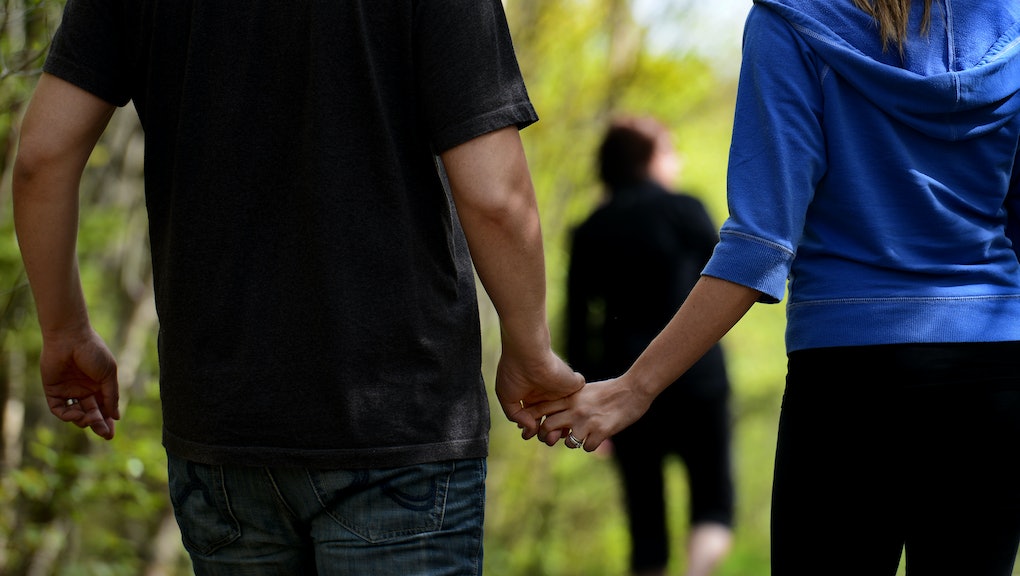 6 Actual Facts About What It Really Means to Be Asexual

Sassafras Lowrey has identified as queer since ze was a teen, and has actively participated in BDSM/leather culture for over a decade. But five years ago, Lowrey claimed another sexual identity: Asexuality, which ze said felt "like a natural extension of the continual process of understanding my own queerness."

Given that the nation still debates the freedom to express sexuality — exemplified by things like the battle for marriage equality — it's no wonder we tend to ignore individuals who want freedom from sexual relationships altogether.

That hardly means such individuals don't exist. Although there is little research about prevalence, one 2004 British study found that about 1.1% of the British population identified as asexual; other estimates fall between 0.6 to 5.5%, according to Wired.

Because many are simply unaware that it exists in a way distinct from their biology book's definition of self-reproduction, many myths and misconceptions surrounding asexuality remain prevalent. Here's what asexuality actually is:

"Many people feel comfortable finding a 'sexual identity label' that suits them. Those who choose a sexual identity like 'asexual' may do so in order to feel understood and to connect with people emotionally and socially."

This desire to connect is one that prompted David Jay to start the Asexual Visibility and Education Network as a college freshman in 2001. "I had spent the past four years struggling to realize that I was OK, and I didn't want other asexual people to have to realize the same thing," Jay told the Atlantic in 2012. Today, Wired reports, AVEN has more than 80,000 registered users, who undoubtedly draw strength and support from each other.

2. A spectrum of sexuality in and of itself

Even among asexual people, there are a spectrum of identities. Demisexuality, for instance, is "a sexual orientation in which someone feels sexual attraction only to people with whom they have an emotional bond," according to the Demisexuality Resource Center. They may "think of themselves as halfway between asexual and sexual," Locker added.

Gray-asexuals, or "gray-sexuals," Locker said, "feel they are within the gray area between asexuality and more typical sexual interest." For instance, one self-identified gray-sexual woman told the Frisky that while she never initiates sex in her relationships, "my partner can physically arouse me and then I'll go with it,  but before that happens it just doesn't really occur to me."

People often misperceive asexuality as completely divorced from intimacy, but asexual individuals can — and do — have romantic feelings for others, and they often enter and maintain romantic relationships. For example, asexual individuals may identify as "panromantic," which involves having a "nonsexual crush" on another person, or "heteroromantic," meaning they're drawn to the opposite sex.

Lowrey, for example, identifies not only as asexual, but also as polyamorous and has been with the same primary partner for nearly 11 years. "People who consider themselves asexual may have relationships, but they would not have the interest in adding a sexual component to the relationship," Locker said.

4. A challenge to how we define intimate relationships

"For me, asexuality is in large part about understanding and owning that my most intimate relationships don't need to involve sex, and that for me, sex isn't how I build intimacy," Lowrey told Mic.

Asexual individuals not only have relationships, therefore, but further call into question the way our society defines intimate relationships as inherently sexual — and, beyond that, how we falsely conflate sexuality with humanity itself.

"Sex has become so fused with our sense of self that we can't even imagine how it might be any different," Ela Przybylo, a sexual cultures researcher at York University in Canada, told the Atlantic. "This is why asexuality is compelling, because it does imagine how it could be different."

5. Not a mental or pathological disorder

Asexuality has often been diagnosed as "hypoactive sexual desire disorder," and, according to Psychology Today, may be considered by some to be a psychiatric condition. But other experts and asexual individuals alike beg to differ.

"Someone who feels secure in the asexual identity would tell you that he or she is not depressed, sad, confused, repressed, traumatized or even exercising restraint," Locker told Mic. "He or she would most likely express that this is simply the way that he or she experiences sexuality."

It's worth noting, however, that one 2013 study found that those who identify as asexual may have a higher incident of mental health issues such as depression and anxiety — although this may very well be a response to the social stigma and misunderstanding of individuals who are asexual, not because of their asexual identity itself.

6. Not the same thing as having low libido or being celibate, abstinent or a virgin

"Someone who is celibate, abstaining or a virgin may have sexual feelings towards others, yet hasn't had the opportunity to have sex, hasn't found a partner they desire or is choosing to wait to have sex for any number of reasons: personal, emotional, religious or other," Locker said.

Similarly, those with low libidos may "wish they desired sex more, or they feel that there is something wrong with their sexual desire," Locker said. But this is distinct from asexuality, as "someone who calls him or herself 'asexual' does not want to change his or her sexual desire or sexual identity, and is comfortable with not having an interest in having sex," she added.

Superficially, asexuality may seem like a rejection of sexuality, but the identity is actually a more authentic way for many to embrace their sexuality. Increasing asexual visibility, therefore, opens the space for a more nuanced understanding of sexuality that ultimately benefits us all.