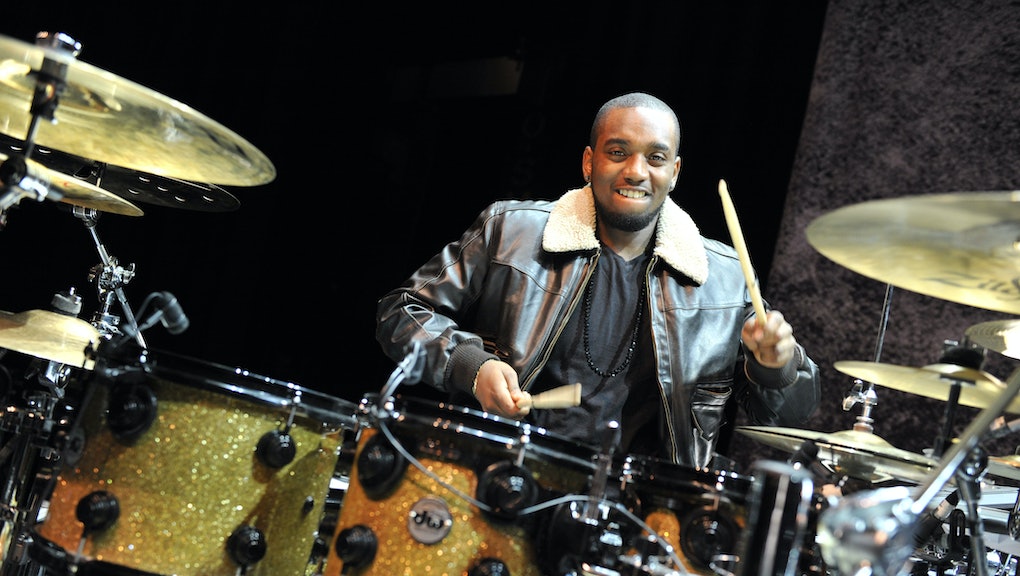 Science Shows Drummers Are Fitter and Happier Than Everyone Else

Any drummer knows that strange and wonderful feeling you get after an intense session. "When it's over, you can hang yourself up to dry. To me, that's the most satisfying feeling in the world," Greg Fox, one of the New York music scene's most sought after drummers, told the Washington Post. "That feeling of exerting yourself — it's so vital."

But that sensation is more than mere pleasure. Drumming is unlike any other form of musical expression in that it carries profound and scientifically proven health benefits. Several scientific studies have shown that playing drums can provide a measurable impact on stress relief, cardio health and general happiness. Drummers might actually be the fittest and happiest people you know — no other instrument comes close.

The body: A host of studies show that drumming can relieve stress, lower blood pressure and strengthen the immune systems of those who play. Extended periods of drumming release endorphins and enkephalins, neurotransmitters that act as natural painkillers and mood enhancers. In short, your body signals to you what your neighbors won't — keep drumming.

"This is the 'high' that many drummers feel even hours after playing," Asif Kahn, a board-certified internist and avid drummer, wrote in the publication Modern Drummer. "It translates to reducing our systolic and diastolic pressures and also to reducing or smoothing out our heartbeat." Reducing one's blood pressure can benefit heart health, which can reduce the likelihood of heart attacks, strokes and breakdowns in the immune system.

According to Michael Drake, author of several books on the therapeutic value of the drumming, the fact that playing drums requires a great degree physical exertion as well as a deep focus on almost every limb and muscle in the body, encourages more emotional release and stress relief than instruments that only require the mental bandwidth of the hands and fingers. That means guitarists and pianists don't get nearly the same rush.

The immune system: Additionally, neurologist Barry Bittman has found that drumming in group settings can significantly reduce stress and promote white blood cell and natural killer cell activity, which battle virally infected and cancerous cells. It isn't just about physical symptoms, though — drumming even helps you manage your job better. In other studies Bittman found that engaging in group drumming can significantly reduce fatigue, hostility, depression and other burnout symptoms in people working high-stress jobs.

Due to a limited amount of experimental controls, it's unclear how many of these benefits can be attributed to the act of drumming itself or to community established in the therapeutic setting. But Bittman still believes drumming plays an integral role in the healing.

"An historical review disclosed that drumming as a healing ritual has been used for thousands of years by many civilizations throughout the world," he told Remo's HealthRHYTHMS project. "From a global perspective, our findings simply serve to validate the wisdom of the ancients."

The mind: Other studies show that drumming may neurologically induce powerfully positive feelings. In his book The Healing Power of the Drum, psychotherapist Robert Lawrence Friedman shares an interview from Barry Quinn, a clinical psychologist specializing in neurofeedback and stress management. Quinn says drumming can change a person's brainwave patterns by prompting the release of alpha waves, which are associated with a "general feeling of well-being and euphoria."

Quinn took a group of highly stressed patients at risk for addiction and sleep deprivation. "The instructions I gave them were to drum a soft slow heartbeat type of rhythm," he told Friedman in the book. "Not everyone followed the instructions. A couple did some emotional expressive drumming ... but I found that 50% of the ones I tested got a normal Alpha wave pattern after thirty minutes of drumming, which means that their Alpha waves doubled." The results were immediate.

"I was also impressed by the fact that the Alpha waves occurred in these hypervigilant, high-stressed people after only 20-30 minutes," he said. "It wasn't after five sessions. It was immediately after the first drumming session." That's something that drummers feel every day.

The research about drumming's potential therapeutic effects is still in its infancy, but it points to one truth: Drumming is one of the best things you can do for your mind and body.

Most of the research just provides support for the things drummers already feel. That feeling of well-being and relief after playing doesn't change even if you know the names of the neurotransmitters behind it. But all this science may just add one more layer to the old adage that a band is only as good as its drummer. It may be that a band is only as intelligent, happy and healthy as its drummer, too.