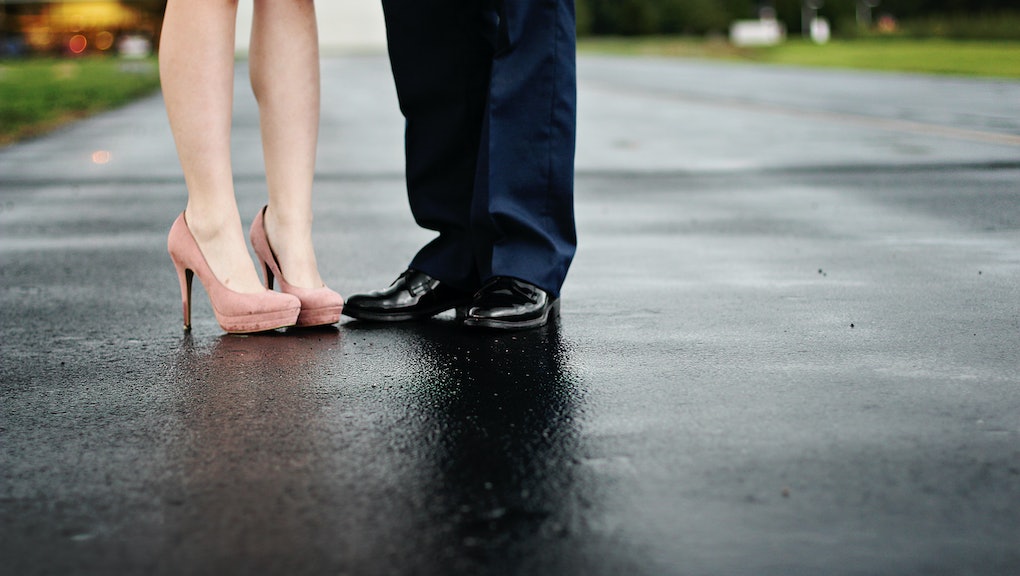 Maybe We Don't Have to Feel Guilty About "Dressing for Men"

It was a Saturday night, which meant the music was blaring, drinks were flowing and all the 20-something women were wearing their skimpiest, shiniest "going out" outfits.

Well, not all of them. I was wearing my typical Saturday night outfit, a plain white v-neck shirt and ripped gray jeans. Tonight, I topped it off with a brand-new pair of Nike Dunks.

The guests have started to arrive at our apartment party, including a male acquaintance who immediately noticed my shoes.

"Thanks, dude," I replied, explaining that they just arrived two days earlier so I couldn't help but wear them. Sure, it was a Saturday night birthday party; but skimpy and shiny weren't my jam, and neither were heels when I had the option of sneakers.

I was proud of myself for not succumbing to male standards of sexiness and dressing for myself. I was also so pleased he'd noticed.

The feminist rules of getting dressed: Women have been defiantly rejecting "female" fashion even before we had the word feminism. For activists like Amelia Bloomer in the 1850s and the so-called radicals who tossed their bras (but didn't actually burn them) a century later, rejecting female fashion has long been a ritual shaking off society's expectations of women.

When it comes to clothing, like with so many other elements of female life, such "liberation" imposes a unique burden. As empowered women, what looks like permission to not care what men think has been twisted into a directive: We shouldn't care what men think. We're operating in a world that seemingly values us as intelligent, self-sufficient, competent humans, after all. To care what men think about what we wear would be a disservice to our empowered, modern, feminist selves. If we define our own worth and derive our confidence from within ourselves, validation from men should be besides the point.

This viewpoint is as strong as ever, as I learned when, as editor of the style section of the Huffington Post, I published an article titled, "23 Trends Guys Hate (But Women Love)." The list was meant to channel the upbeat and bemused spirit of the Man Repeller, the fashion blogger who made her name highlighting high fashion trends embraced by women despite — or happily and willfully because of — their complete lack of sex appeal.

The backlash to the article was swift. Readers and journalists alike rejected the very fact of women acknowledging what men think of their clothing, assuming that acknowledgment means caring and that caring directly influences decision-making. As Jezebel put it, "Hahaha, Men Still Think We're Dressing for Them." Obviously, if we're sassy, give-no-fucks modern women, we're not.

Admitting that yes, we care: Later the night of that party, having transferred to a bar, I hung back at a cool distance while my girlfriends mingled. It's not that I wasn't interested in socializing that night; rather, if I was being honest with myself, my stance was an extension of my chosen outfit.

I'm not dressed like a "lady" to attract male attention, nor am I wearing what stores like Forever 21 and Zara would define as sexy. But leaning by the bar in my modest T-shirt, jeans and Nikes was, admittedly, not an accidental decision. If no guys are drawn to me and my chosen look that night, great; I wasn't dressing for them in the first place, I'd tell myself, and could congratulate myself on another evening in which I proudly "did me."

If a guy was drawn to me, however, he probably appreciates my chill, unpretentious vibe. That not only says something about him that I respect and therefore find attractive — clearly, he's the kind of guy who appreciates a "real girl." It also might say something about my own beauty, that he didn't stop at the plain white v-neck and sneakers; that my attractiveness is so absolute and unconditional that it requires no ornamentation beyond the most basic of clothing.

At least, that's the self-absorbed line of logic presented by my vainer self. But we'd be lying if we didn't admit we all have those versions of ourselves — and those are the selves that get us dressed.

Redefining "dressing for ourselves":  We all care what people think about our clothes, to the extent that we have to be seen in them. We follow the unspoken codes of sartorial conduct and then some, choosing between skinny jeans or straight-legged, heels or sneakers, the plain necktie or the loud one. Such considerations may seem so subtle as to render them irrelevant. But even our non-decisions about our clothes are decisions.

For women, those decisions are especially fraught. If being a modern, empowered young woman means dressing for yourself, dressing for anyone else — especially a man — feels antifeminist. Getting ready for a date or a night out? The process involves an internal conflict that extends far beyond choosing between dangly earrings or studs.

But we shouldn't have to feel so conflicted, because the reality is this: "Dressing for ourselves" is a fallacy. When we do so, we still dress for the selves we'd like to be, embodied and observed, in the wider world. That might not take the opposite sex's opinions into deliberate consideration, or our same sex peers'. But we consider our image nonetheless. When viewed in the same light as so many other contemporary feminist debates, that fact doesn't have to feel so damning.

In today's world, populated by Beyoncé writhing to "Drunk In Love" and the heroines of Broad City having as much sex as they please, acknowledging female sexuality — and thus female sex appeal — doesn't undermine our feminism. And wearing clothes that will attract men (or women, or whoever cares to drink in our sexiness) isn't a denial of our female agency.

Are many of our fashion choices, especially the "sexy" ones, still rooted in traditions of male-female attraction? We'd be naive to think they're not. But acknowledging that you chose an outfit that might render you attractive is no more damning than admitting you flirted with someone you thought was hot. Dressing for ourselves means dressing for the people we want to be and the lives we want to lead — and that includes the kinds of people we want to attract.

Especially if those guys appreciate our T-shirts and jeans.