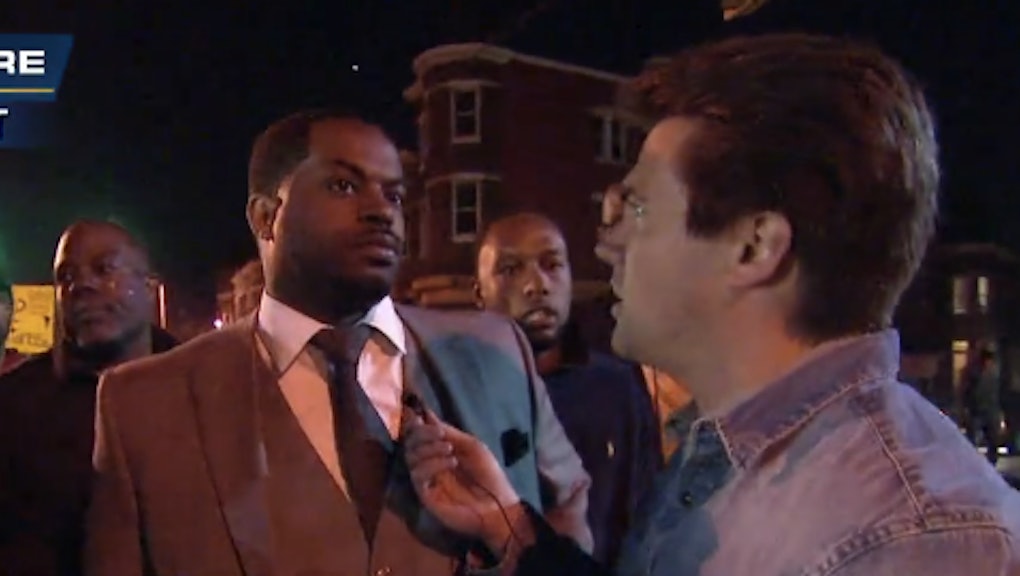 As riots continued to engulf Baltimore Monday night, a City Council member spoke to a Fox News reporter and quickly got to the real root of why these protests are happening.

Councilman Nick Mosby told Fox the issues which sparked the violence run much deeper than the death of Freddie Gray.

"This can erupt anywhere in socially economically deprived America," Mosby said. "This is bigger than Freddie Gray."

Mosby began the impromptu interview in the streets by explaining the impetus for some of the actions of the young people in Baltimore.

But when the Fox News correspondent asked about the looting specifically and whether it was OK, Mosby has the perfect response, noting that this goes far beyond the right here and right now to past decades of problems in America.

Mosby, who unequivocally condemned the violence, also took a shot at his interviewer, Fox News'  Leland Vittert for failing to take into account the bigger picture. He also chided the national media's obsession with the riots over the vast majority of peaceful protestors. Mosby then decried the attention that media gives events like those in Baltimore and Ferguson while largely ignoring destructive riots involving white people.

There's a sting of truth in Mosby's words. At a glance, black men in America earn about a quarter less than white men. Black Americans do not have the same access to education as their white counterparts and black men, like Freddie Gray, are 21 times more likely to be killed by police than white men.

The Baltimore protests many have started with Freddie Gray, but the conversation they ignited has now evolved into something much more. When the violence stops, it's a discussion that needs to keep going.