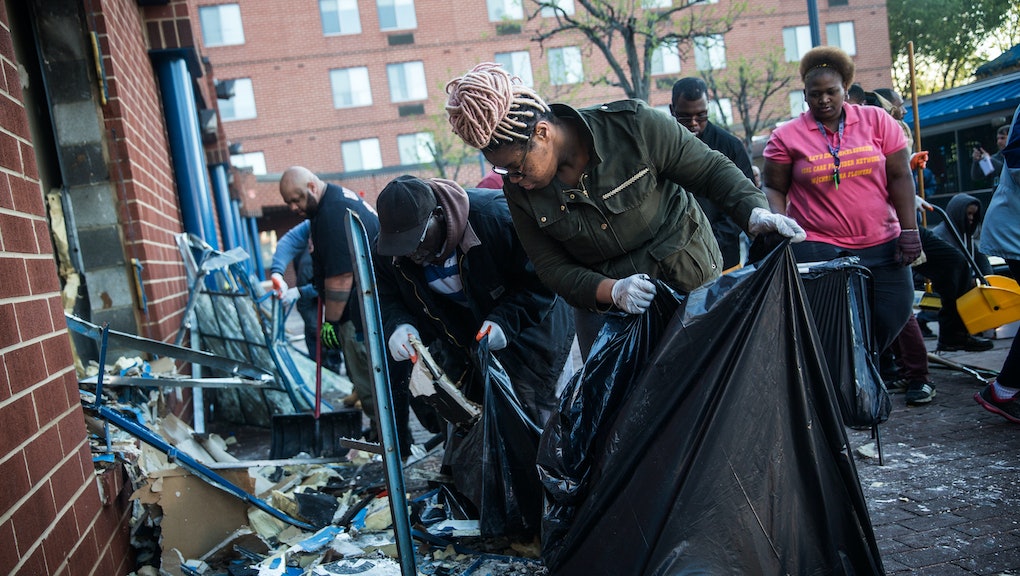 10 Images of the Baltimore Riots You Won't See on TV

On Monday, the media was quick to paint a single picture of Baltimore: a chaos scene of violence and mayhem filled with images of looting, rioting, the burning of a CVS and the torching of a police car.

But on the ground, a very different story unfolded. You'd never know it from the media's Gotham-esque portrayal of a city riddled with criminals and "thugs," but on Monday night Baltimore was also a story of good Samaritans trying to disperse emotional crowds. It was a story of everyday citizens determined to dissipate tensions between protesters and police, of ordinary folks cleaning up their city while the media turned its cameras away. And it was a story of determined advocates for racial equality holding a meaningful dialogue with police on the streets.

Here are 10 powerful images images showing a very different side to Baltimore than the one you saw on television:

A man stands between agitated protesters and a line of cops, trying to quell the protestors' aggression by blocking them and yelling, "Do not give them a reason!"

A man stood outside a 7-Eleven and reportedly blocked the entrance from being attacked by looters.

A young black man has a passionate dialogue with the police over Freddie Gray, and the police officer agrees with everything he says.

Ordinary citizens clean up after the riots once the cameras turn their attention away.

A group of older black men in suits, reportedly with the Nation of Islam, walk through the streets in an attempt to disperse the crowds.

A Michael Jackson impersonator offers light relief to protesters by dancing in the street.

Literally thousands of protesters march peacefully in Freddie Gray's honor, including people of all races, even though they don't get the same airtime.