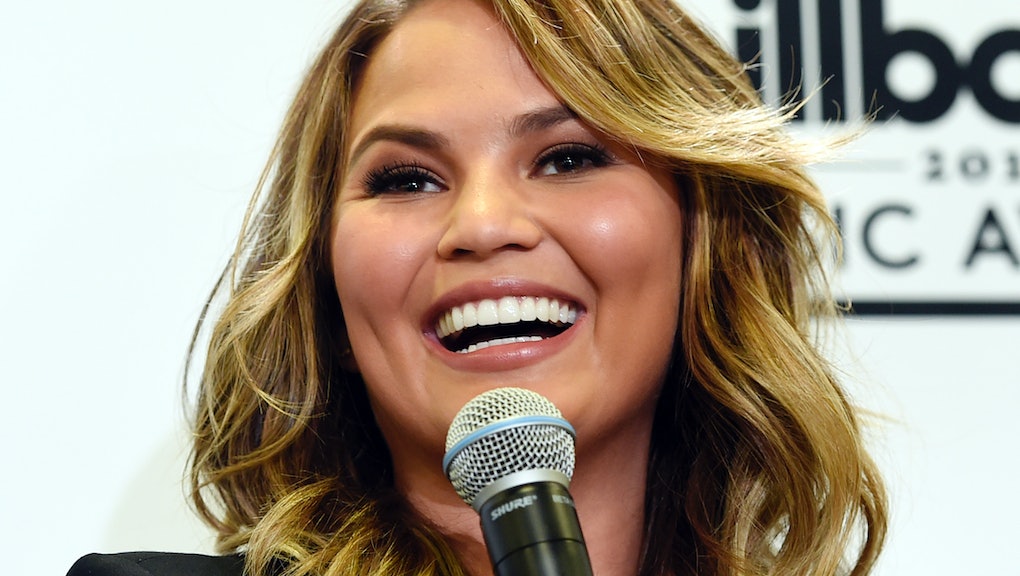 Sports Illustrated model and Twitter queen Chrissy Teigen appeared on the Meredith Vieira Show on Friday and gave the world this much-needed dose of reality:

"We've forgotten what normal people look like now. The standard is so ridiculous."

Teigen was discussing her stretch marks, which went viral in an Instagram photo that she posted with the caption "Stretchies say hi!" In the segment, she targetted photo-retouching apps, telling Vieira she wouldn't be using them anymore.

"I have those apps — the Facetune, those Photoshopping ones — and I just didn't feel like doing it anymore, and I'm never doing it again," Teigen said.

The problem, Teigen said, is they create unrealistic expectations for what people are supposed to look like. She said the way celebrities and models look in photographs is not how they look in real life — a disparity that can cause emotional damage to fans who base their own body expectations on their celebrity idols.

"When you're fixing yourself so much, it's so unfair," Teigen said. "I've seen these women in person, they are not like that. Please know that. I've shot in barely anything with them, and it's just amazing what people do to tweak themselves."

Digital plastic surgery: Apps like Facetune offer users a plethora of options for altering their photos, from teeth whitening and face reshaping to skin brightening and smoothing. There are dozens of other apps out there, like Photo Makeover, that perform similar functions.

"I mean, people are nip-tucking," their pictures, Teigen said. "It's gotten to a point where they're not smoothing their skin anymore — they are actually changing the shape of their body."

While Teigen has no problem acknowledging her physical imperfections, other celebrities are not quite as open. Beyoncé, Kim Kardashian and Miranda Kerr have been criticized in the past for attempting to edit their photos. And there was the time John Mayer went a little overboard with the smoothing tool on a photo of himself and a friend.

Retouching in magazines is one thing: Advertorials and photo shoots are expected, to some degree, to carry minor edits. But photos on social media are viewed by many as a window into a subject's actual life — their more personal, private moments. By altering these shots, celebs give fans the impression that what they see is what they get. As Teigen is quick to point out, that's definitely not the case.

Moreover, it's not like regular people are looking at these photos and moving on with their lives; real people regularly use these retouching apps. As Health magazine pointed out, Facetune has over 100,000 downloads on Google Play, which means that the vast majority of users are not celebrities.

Redefining "flawless": Teigen is setting a positive example, not just for everyday people but for other celebrities too. Her attitude toward body positivity and honesty should be applauded.

After all, as Teigen said in an interview with New York magazine, "things are never, ever as they seem. ... Those full lashes have been applied meticulously one by one, my teeth have spent more hours in a dentist chair than I ever imagined. We have a team of people whose sole job is to make people appear close to perfect."

Finally, Teigen demonstrated why we should all embrace our imperfections. "My bathroom mirror ... would laugh hysterically if you told it I was flawless in anyway," she said. "And that is fine with me."