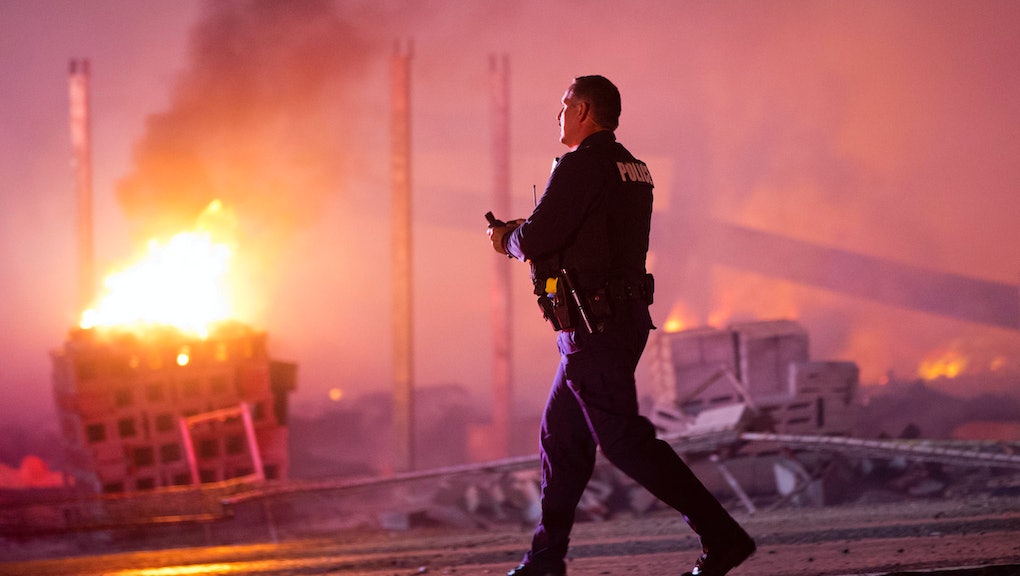 Thug. It's a word that means way more than most people assume.

A thug is simply defined as "a violent criminal," or "a cruel or vicious ruffian, robber or murderer." Words, of course, have literal definitions. But colloquial usage, more often than not, colors the meaning for the words people prefer.

Usage of the word "thug" spiked on Twitter Monday, appearing in roughly 50,000 tweets, more than any other day in the past month. In the preceding days, it mostly came up in references to rappers or hip-hop lyrics. As riots unfolded in Baltimore — riots that followed the funeral of Freddie Gray, an unarmed black man who died at the hands of police officers — "thug" suddenly became the go-to word to describe every person on the street.

If the word "thug" were used to reference all forms of violent action, that would be one thing. But this word has become reserved for black people, regardless of whether or not they're engaged in civil unrest or criminal activity.

#KnowTheCode: In moments like these, "thug" is a racially coded word, a post-racial substitute for the overt monikers of black people from yesteryear. "Thug" has transformed into a pejorative word that perpetuates stereotypes of inherent black criminality. The problem isn't who uses the word per se, but the message it sends to others.

But the usage isn't restricted to any allegations or knowledge of violent behavior. Black people who peacefully protest in Ferguson, Missouri, or who dare to authentically express themselves, like Seattle Seahawks cornerback Richard Sherman after winning the 2014 NFC Championship game, are branded with this label. As Deadspin  reported, during the 24 hours following Sherman's now-infamous interview with Erin Andrews, where he boisterously called out his naysayers, the word "thug" was used on television roughly 625 times as a descriptor, more than on any other day in the preceding three years.

Sherman wasn't even engaged in violent behavior; he was on an emotional high while discussing his skills. Contrary to media tropes of "thugs" as poor, urban youths, Sherman graduated from Stanford University, the most competitive university in the U.S. But not even a famous, educated and affluent black man is immune from such treatment. Even further, as Deadspin noted, he was also called a "monkey" and a "nigger" on social media.

Now that news of the Baltimore riots continues rolling, it's deja vu.

As Sherman told reporters in a press conference following the fallout, thug has become an accepted way of calling somebody the N-word: "It's like everybody else said the N-word, and they say 'thug,' and they're like, 'Oh, that's fine.' And that's where it kind of takes me aback and it's kind of disappointing. Because they know." Sherman continued, "But there was a hockey game where they didn't even play hockey. They just threw the puck aside and started fighting. I saw that and I said, 'Oh man, I'm the thug, what? What's going on here?'"

Anyone can be a thug — "a cruel or vicious ruffian, robber or murderer." But that's not how the word gets deployed.

White people who engage in mass shootings or bombings? They're not usually called thugs.

No, it's not a word white people constantly hear during the course of any activity that could even remotely be perceived as criminal. Making coded appeals that frustrated, rioting black Americans in Baltimore are the crux of everyone's problems does nothing to address the root cause: state-sanctioned violence against black people. It's not thuggish to say "enough's enough."