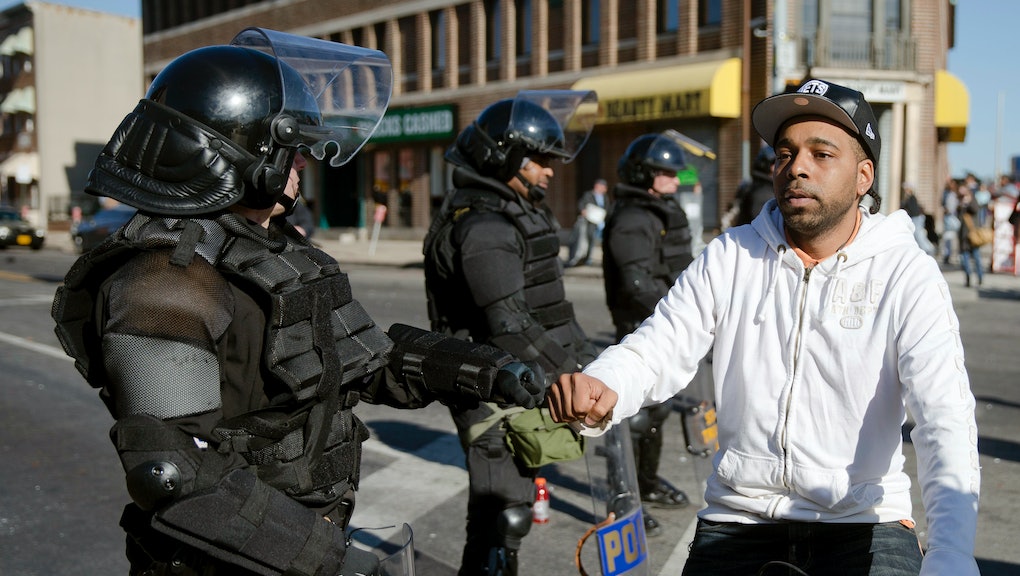 With Monday's riots taking over parts of Baltimore, it's easy to lose context of the double standards in how the media portrays crime and violence perpetrated by different ethnic groups. But the following photo of a woman protesting late last year in New York captures the problem with how the media covers such events, and in light of recent events, it's more relevant today than ever.

Though the photo was taken in December 2014, it's been remaking the rounds on social media and going viral with hashtags such as #Baltimore, #FreddieGray and #BaltimoreRiots.

While this picture speaks for itself, this woman could not be more right when it comes to the way news outlets have covered Baltimore over the past few days and, more specifically, how people respond to and react to such crime.

While in Baltimore police custody April 19, Freddie Gray, a 25-year-old black man, died of fatal spinal injuries that he did not have before he was arrested. Gray's funeral Monday coincided with thousands peacefully protesting this injustice. Yet publications like the New York Times disproportionately focused on the few troublemakers, with the headline "Scenes of Chaos in Baltimore as Thousands Protest Freddie Gray's Death."

When Andreas Lubitz, the 28-year-old Germanwings pilot, allegedly locked the cockpit and crashed Flight 9525 in March, the media tried very hard, Mic's Zack Cheney-Rice noted, to not call it an act of terrorism, even though "Brown people aren't the only people capable of terrorism."

However, when the demographic of arsons and hoodlums is overwhelmingly Caucasian, the interpretation of events is starkly different.

As Mic's Derrick Clifton wrote, "Usually, if a riot involves black people, it's connected to intense episodes of where systemic racism is undoubtedly at work." But when white people are protesting, often after a major sports victory, the coverage is decidedly more favorable. A Reuters report of a riot after the San Francisco Giants won the 2014 World Series called it "fans take to the streets."

The tragedy of this racially biased reporting makes the struggle for civil rights in this country a self-fulfilling prophecy. The more people interpret the meaningful protest for African-Americans' racial equality as a violent act of thugs, the more people are exacerbating the problem.