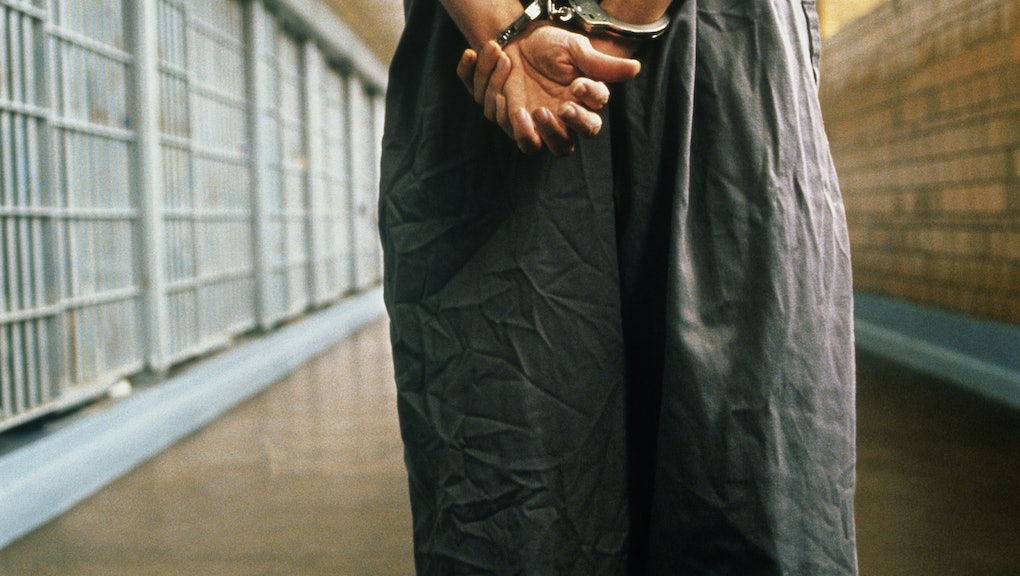 James Burns wasn't sure if what he was seeing was real.

He saw a bed, linoleum floors and fluorescent lights, but the medication in his bloodstream had been causing him to hallucinate. He walked to the door and found it locked. He screamed in panic and kicked the door. People came into the room, restrained him and injected him with tranquilizers, knocking him out. When he woke up, the cycle repeated.

Burns was 6 years old, and was being subjected to two weeks of solitary confinement at a hospital in Denver, Colorado. He had been taken to the facility after repeatedly acting up in school and running away from home. He says the two-week episode was traumatic and left an indelible mark on him.

"You never come out of solitary confinement the same person again. You don't feel normal," Burns told Mic in a phone interview.

Burns says that his stay at the hospital triggered habitual nightmares and exacerbated his social problems, sending him "down a deeper hole." It turned out to be the first of a nearly annual pattern of being institutionalized for delinquent behavior throughout his youth, culminating in being charged with aggravated robbery at the age of 15 and being incarcerated for the next five years, where he would again be placed in solitary confinement multiple times.

Burns, now 28, has been out of the prison system for several years, but he lives with the scars of his experience in solitary confinement to this day. According to civil liberties experts who study jails and prisons, Burns' experience wasn't exceptional. Solitary confinement is used on incarcerated young people all across America today, and it's exacting a toll that many never recover from.

What Burns endured: At a correctional facility in Pueblo, Colorado, where Burns served most his sentence, he says that his resentment towards authority consistently led him back to the harrowing place that created that resentment in the first place. "Just about anything could land you in solitary confinement," said Burns, who described how his propensity to talk back to corrections officers — often to protest physical and sexual abuse that he says he witnessed — was a surefire way to end up locked up in solitary. He spent several periods in solitary confinement while incarcerated as a teenager, sometimes for weeks and months on end.

When in solitary confinement, Burns said he usually lived in a roughly 8-by-8-foot cell for 23 hours a day. The room was austere: a bed, a toilet, a sink, a small desk. A single window was partially covered by a metal plate, which allowed natural light to enter the cell in slivers. He said that to prevent himself from going mad from isolation, he would do anything to come into contact with others.

What does solitary confinement do? Solitary confinement is a type of incarceration that typically deprives a detainee of human contact for 22 or more hours a day. It is used in correctional facilities to punish poor behavior, isolate violent detainees and protect detainees from harm from others or themselves, if they are suicidal.

Keeping prisoners alone for prolonged periods of time has been practiced in some form in the U.S. since at least the 19th century, but in recent years it has grown increasingly controversial. There is a growing body of evidence that it can be extremely psychologically damaging, and with this evidence there has been a surge in calls from across the political spectrum to characterize the technique as torture and ban the practice altogether. In March, Supreme Court Justice Anthony Kennedy said, "solitary confinement literally drives men mad."

The corrosive psychological effects of solitary confinement are amplified dramatically when the subject is young.

"Adolescent brains are still developing. We know that putting them in a situation where their senses are isolated is something that is traumatic for them and that it exacerbates mental health conditions," Dana Shoenberg, deputy director at the Center for Children's Law and Policy, told Mic. "Keeping people in a locked room also means they're not getting exercise, they're not getting sunlight and other things that teenagers' bodies need. It's harmful both physically and from a mental health perspective."

A 2012 report by the Attorney General's National Task Force on Children Exposed to Violence stated that, "Nowhere is the damaging impact of incarceration on vulnerable children more obvious than when it involves solitary confinement." The report surveys investigations that find that "juveniles experience symptoms of paranoia, anxiety and depression even after very short periods of isolation," and that "among the suicides in juvenile facilities, half of the victims were in isolation at the time they took their own lives, and 62% of victims had a history of solitary confinement."

But experts say that with the exception of half a dozen states that ban certain forms of it in juvenile facilities, it is commonplace across the U.S. Ian Kysel, an adjunct professor and a fellow at the Human Rights Institute at the Georgetown University Law Center, documented some of the signs of its pervasiveness in the New York Times last December:

A major study by the Department of Justice in 2003 showed that more than 15 percent of young people in juvenile facilities, some as young as 10, had been held in solitary. My own research, for Human Rights Watch and the American Civil Liberties Union, suggested that the practice of putting teenagers in solitary was more widespread in adult jails and prisons. A recent Justice Department investigation found that at any given time in 2013 as many as a quarter of adolescents held at New York City's Rikers Island were in solitary confinement. Dozens had been sentenced to more than three months in solitary. Still others were held longer, for more than six months.

Youth solitary confinement is symptomatic of other ills that plague the corrections system. A 2011 estimate by the American Civil Liberties Union and Human Rights watch put the number of youth in adult jails and prisons — where there are no restrictions on solitary confinement — at around 95,000. The common rationale for putting young people in adult systems is that they've committed an "adult crime," and that the consequences should reflect that. That doesn't change the fact that they're still kids.

Youth solitary confinement is not only something that can be meted out more harshly in adult jails and prisons, but corrections facilities often resort to placing young prisoners in solitary to protect them from adult inmates, who physically and sexually abuse juveniles routinely. One study from 2003 found that "juveniles were five times as likely to be sexually assaulted in adult rather than in juvenile facilities," according to the New York Times.

Solitary confinement should be limited dramatically. Advocates against solitary youth confinement, who generally oppose solitary confinement for people of all ages, are lobbying for new restrictive guidelines that would make the practice something that is used extremely selectively and for brief, carefully monitored periods of time, and only to prevent harm.

The idea is that when a juvenile is a threat to themselves or others, they are kept away from other inmates for as long as they need to calm down, and then immediately returned to normal social settings. That means being isolated for minutes and hours, rather than weeks and months. The standards recommended by the Annie E. Casey Foundation's guidelines for jurisdictions participating in the Juvenile Detention Alternatives Initiative proscribe ever using it for longer than four hours and only when all other measures have failed.

New York's Rikers Island is the most notable recent example of a correctional facility taking steps to end youth solitary confinement. In January, the city abolished the practice for inmates at the jail who are under 21 years of age, following a stinging report from U.S. attorney Preet Bharara documenting abuses at the facility. Bharara is suing the city over its treatment of young prisoners at Rikers, which is the second-largest jail complex in the U.S.

Burns, who today is a filmmaker and an advocate for reforming the way youth are treated in the incarceration system, says the biggest problem with solitary confinement is the manner in which it dehumanizes the people subjected to it. "Some people absolutely lose their mind. And they may not be able to come back from it," he told Mic.

Much of the psychological damage inflicted on juveniles in solitary confinement is irreparable. What we can do is fix the incarceration system to make sure that it causes no more harm than it already has.