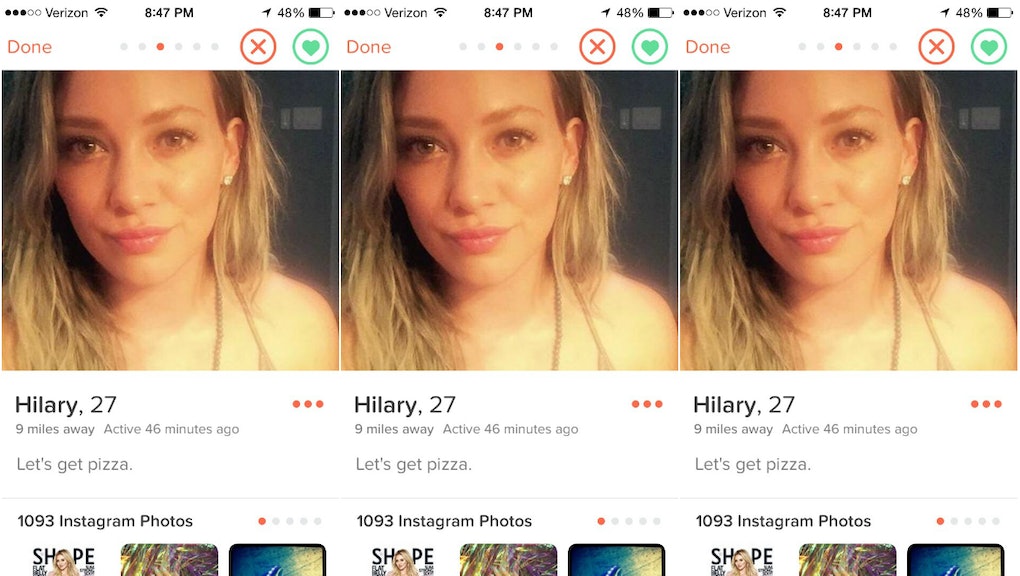 Thanks to Hilary Duff, We Know What an Online Dating Reality Show Would Look Like

You could say every generation gets the dating reality show it deserves, from The Dating Game in our parents' era to MTV's Singled Out in the '90s to The Millionaire Matchmaker in the glossy 2000s. (The Bachelor, well-disguised mating ritual that it is, doesn't count as mere dating.)

Now we're getting a taste at what a Tinder-era reality show might look like, thanks to none other than Lizzie McGuire. Hilary Duff is officially on Tinder, a fact she's shouting from the rooftops since a keen-eyed swiper came across her profile and posted a screenshot to Reddit earlier this week.

On Tuesday, Duff told radio show Valentine in the Morning that she's indeed on the app, which she's found "wildly addicting" so far, and she's talking to at least nine guys. Oh, and she's going on her first date this week.

"I have my first date tonight and I'm really, really nervous," the singer and actress said.

As for what drew her to the lucky guy? "I think the first thing is obviously looks, which sounds super vain but that is what you first go for," Duff told Valentine. "Then also what they say in their little profile has to be funny. I don't want to see some shirtless mirror selfie — that's instantly a 'left.'"

Of course, the guy she's been chatting the most with cleared both of those initial bars. In fact, Duff shared her exact dates plans for the evening:

"By the way, we're going bowling."

Even stars swipe right: Duff might as well have shared the GPS coordinates of the bowling alley, given how weirdly public she's being about the process. There's nothing wrong with some real-talk about dating, and Duff is certainly not the first celebrity to comment publicly on her dating life. Taylor Swift, after all, launched an entire career with thinly veiled digs at her dating exes and now speaks out about the unfair judgments passed on women with dating lives like hers.

But while Swift's dating life is intriguingly glamorous and just out of reach, Duff's sounds bizarrely normal. In fact, under the glaring spotlight of the media, it looks pathetically similar to ours. The endless swiping, the obsessive scrutiny of profile jokes, the first-date coordinating — this is what modern dating looks like, seemingly no matter who you are.

While TV execs take stabs at recreating modern romance on the small screen (the latest being Ellen DeGeneres, who's producing a reality series called First Dates), the answer seems pretty clear: Just get a camera on a straight-talking, compulsively swiping 27-year-old like Hilary Duff, and watch what happens.

It would be the Tinder reality show our generation deserves.

UPDATE - April 29, 2015, 8:17 am: Didn't Duff say she was going bowling on her Tinder date? The actress posted a photo to Twitter on Tuesday, the day of her date, of her and her girlfriends bowling. Was she getting in some practice rounds before her mystery man arrived, or did she (gasp!) make the rookie mistake of bringing her friends along for a first date?

Either way, hashing this one out would make a great second episode of the imaginary Tinder reality show Duff could (and should) be starring in.