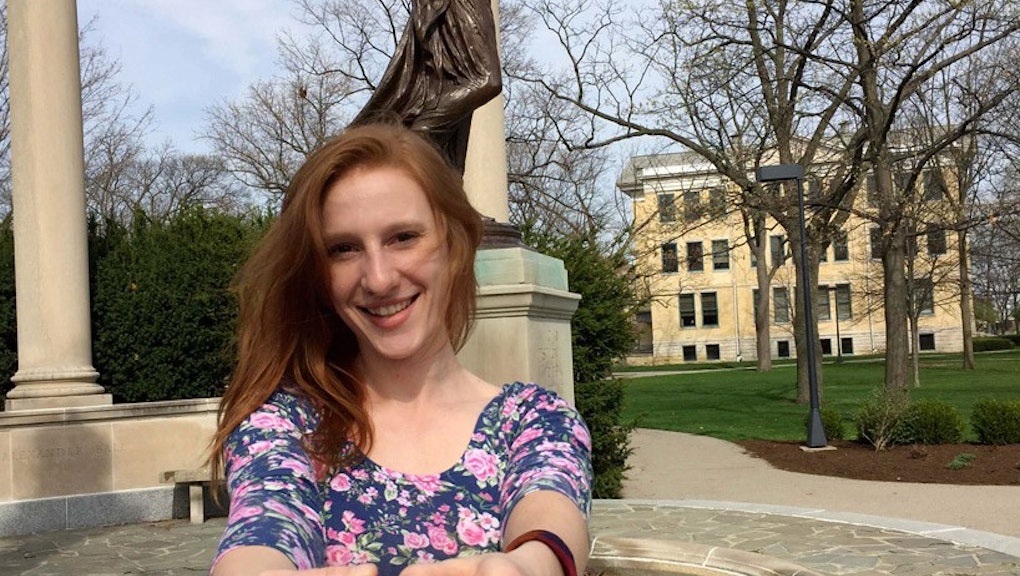 Meet the selfie arm — a selfie stick with a fiberglass hand at one end and a phone mount on the other.

It makes your photos look like you're spinning a lover around in a circle. It's a fun (but a tad creepy) way to take some of the shame out of shooting selfies alone, which is often seen as narcissistic.

Created by artists Aric Snee and Justin Crowe, the selfie arm, which is not yet in production, is an updated interpretation of the ubiquitous selfie stick.

It's cultural criticism. Snee and Crowe designed the selfie arm to criticize people's vanity. The artists wanted a way to turn the mirror on popular culture and poke fun at our insecurities.

They call it "direct commentary on the growing selfie stick phenomenon, and the constant, gnawing need for narcissistic Internet validation." It's "the sarcastic solution to a quintessential problem — nobody wants to look alone while they mindlessly snap pictures of themselves," Snee and Crowe wrote on DesignBoom. "The product conveniently provides you a welcoming arm. And better yet, it doesn't talk or have emotions of any sort. You can even create fake accounts and use its finger to like all your images."

Are selfies really just about narcissism? People love to mock self-shot photos, which grew in popularity among tweens, teens and young adults and have now become a global phenomenon thanks to camera-equipped smartphones. But as Nellie Bowles at Re/code argues, "selfie photos are changing from silly to serious very quickly." She points to the rise in selfie activism to demonstrate that inserting your face in a historical narrative can have a powerful effect.

Then there's the case that selfies have more artistic merit — they're portraits, not just photos. "Ever taken a picture of a breathtaking view that doesn't have an actual person in it? It's a worthless photograph," Drew Magary writes at Deadspin. "You're not Ansel Adams."

Selfies may seem silly — and it's much sillier to take one with a fake human hand. But for millions of people around the world — in transgender and queer communities especially — posting selfies is about more than just Instagram likes. They're about visibility.

The selfie arm reveals an uncomfortable truth about our selfies: No matter how we take them, they remind the world that we exist. And that can be a tremendous comfort when we're alone.