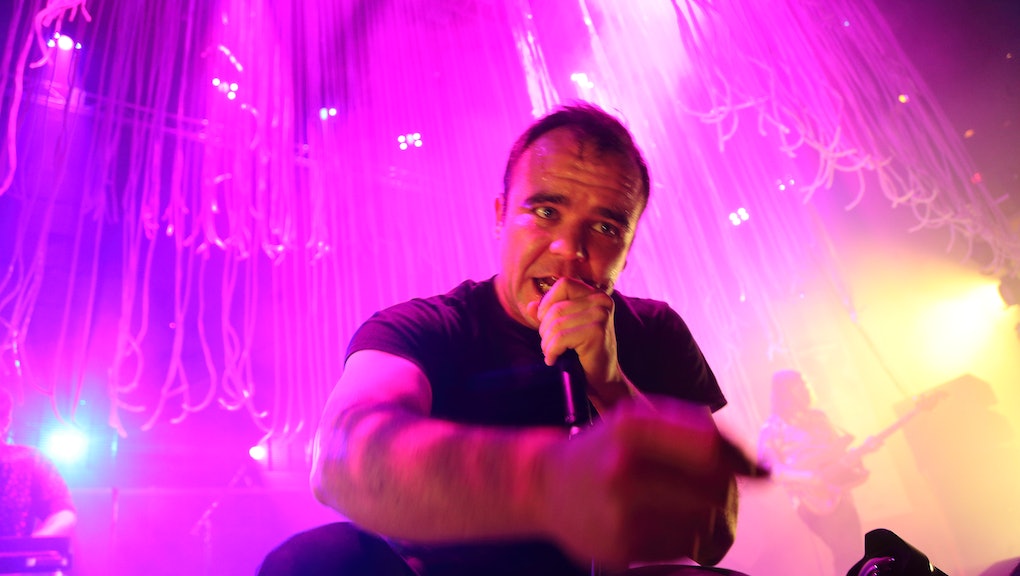 One Year After Their Famous Performance, Future Islands Returned to Letterman

A little over a year ago, Future Islands absolutely tore up the Letterman stage. The Baltimore-based band's impassioned performance set the Internet ablaze, morphing into memes, catalyzing think pieces. The response was so massive, the band wasn't sure they would be able to repeat their brilliance.

But on Tuesday night they returned to Letterman, and after receiving a hearty welcome from the host, they proceeded to tear it up all over again with a brand new song, "The Chase."

For Baltimore. The band dedicated its performance to their hometown of Baltimore, announcing before the song: "This song is going to go out to the people of Baltimore. Let us not discount their voices. Or the voices of all the people in the cities that we live and love."

The past few days, Future Islands has been visible in the discussions surrounding the city's turmoil. The band tweeted earnest thoughts throughout Monday and Tuesday.

They only paused when it was time to promote the performance.

The performance: It was worth the pause. Lead singer Sam Herring's performance was as inspired as his first visit to the show, when Letterman turned his wide-stepping dance moves into a meme to punctuate his monologues.

Herring's steps were not quite as loopy this time. Perhaps as a result, the performance felt more personal and emotional, fitting the nature of the song's dedication — though there was still plenty of showmanship.

Nailed it. Future Islands did exactly what they came to do, which is prove they're not a one-performance wonder. "You don't want to be the band who did that one thing on Letterman and then everyone forgot about you," Herring told NME after last year's knockout show. "You can be the great band, but even after something like that, you want people to come back." As unequivocally epic as their previous performance of "Seasons (Waiting On You)" was, they won't need to worry about that anymore.