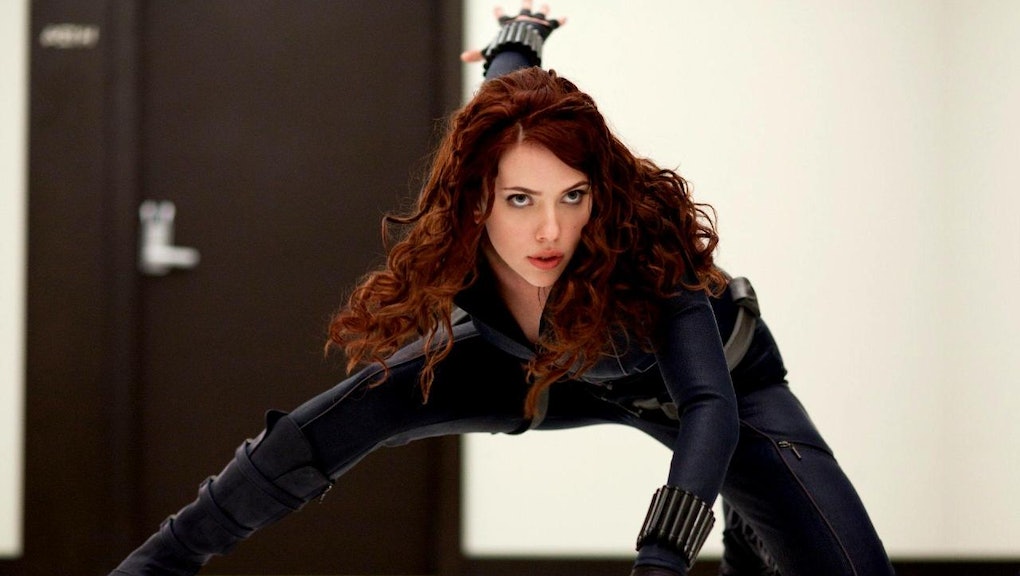 12 GIFs That Prove Black Widow Is the Most Badass Avenger

As America awaits Friday's debut of Avengers: Age of Ultron, one of its heroes remains woefully underrepresented. Black Widow, Scarlett Johansson's femme fatale character, is one of the few Avengers who hasn't been featured in her own movie yet.

She's appeared in both Iron Man and Captain America's adventures, but Black Widow, along with Jeremy Renner's Hawkeye, has had her biggest moments confined to the first Avengers film. If all goes according to plan, Marvel will produce a Captain Marvel film as the first headlined by a female hero before Black Widow even gets her shot at top billing.

That is a tremendous shame, because Natasha Romanoff is the single most kickass Avenger.

From her first on-screen moment in Iron Man 2, Romanoff proved her badass bonafides. Tony Stark's trainer, Happy, figured her for the Tae Bo type, unlikely to have any real fighting experience. She shut him down easily.

She got her first big fight sequence in Iron Man 2 as well, immediately showing why the Marvel Cinematic Universe was not meant to be run by boys forever.

She even got a laugh in with nothing more than a can of mace.

In Captain America: The Winter Soldier, she kept kicking ass and served as an invaluable co-lead in Chris Evans' own film. The fight scenes were better than ever.

Of course, nothing was quite as incredible as watching the Black Widow wipe out three Russian criminals with a wooden chair tied to her back in the original Avengers.

The best thing about Natasha, however, is not her fighting prowess. While she's incredible at throwing a punch (and a kick) no Marvel hero is complete without a rich characterization to complement their fight choreography. Black Widow has a brilliant mind for computers and strategy. She can gain the upper hand even when she seems outmatched, like when she had to hack into her enemy's computers from a laptop in an Apple Store.

When faced with her greatest fear — the revelation of her dark past — staring down her enemy in Captain America: The Winter Soldier, she stands firm and ready to face her fate.

She may be savvy and one step ahead at all times, but, like her Iron Man 2 ally Tony Stark, she does it all in style.

Like any good hero, she can put all the skills in her repertoire together to be at her most effective. In Avengers, when she needed to figure out the charismatic villain Loki's plan, she played vulnerable and faked shedding tears to get him to let down his own guard. When, in a moment of ego, he said too much, she was able to figure out he was planning on using the Hulk to his own advantage.

In fact, the new movie Avengers: Age of Ultron hints that, like in the comics, Natasha would be worthy of wielding Thor's hammer, Mjolnir. Because she's so cool, calm and collected, unlike her male teammates, she doesn't need to pick up the hammer. She doesn't need to prove her strength to anyone.

More than anyone else, Black Widow is the Avenger who gets shit done. She's proven just as important, if not moreso, than the stars of the movies she appears in. And she's caused no less than Mark Ruffalo (the Hulk himself) to call for more Black Widow toys to be sold by Marvel.

Natasha Romanoff deserves her own movie. While there are more female-driven super hero movies in the works (Captain Marvel and Wonder Woman come to mind), the vast majority of films in the genre are male-dominated. As many as 46% of comic fans are female, however, so there's really no reason why the Black Widow couldn't be leading her own feature.

She's Marvel's secret weapon, and it's her time to shine. Hopefully, her role in Age of Ultron will prove what fans of all genders know: Black Widow is truly the most badass Avenger.