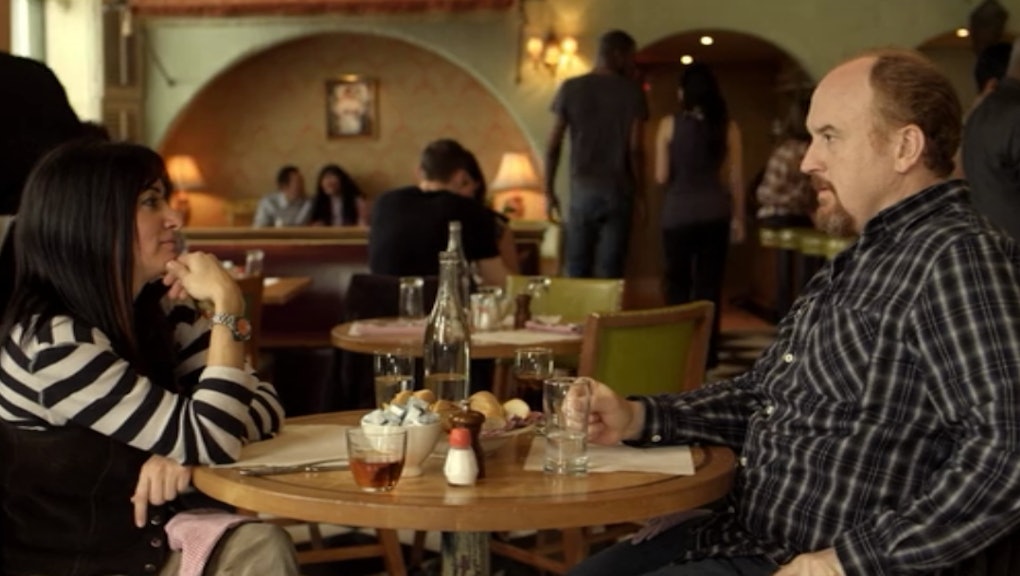 The Best Phrase to Describe Dating Today? A La Carte

Many of us still opt for the traditional entree: a long-term monogamous relationship that leads to marriage and babies (or at least a shared rent). But many of us are choosing a new dish entirely — or rather, a combination of small dishes.

It's already evident in certain millennial trends — eschewing labels, testing out nonmonogamy, cohabiting in lieu of marriage. But really, what those habits all reflect is a preference for embracing certain aspects of dating and discarding the less desirable aspects. In other words, we're not buying the whole meal — we're dating a la carte.

Just the good stuff, please: The concept was recently introduced in a season five episode of Louie, in which Pamela, the woman Louie is seeing, rejects his proposal to move in together. That road leads to "ruin," Pamela argues, referencing the failed marriages all around them (the divorce rate still hovers anywhere from 15% to 50%, depending who's counting.) Instead, she wants to opt into something looser and more selective:

"There's more than one way to be together. Do all roads have to lead to ruin? ... Friends, sex, love, marriage, divorce, ruin. How about another route? Friends, sex, love, Italian food, have your own places, shtup another person, friends ... not to 'have to,' to choose to. To always make a new choice to be together ... I want to keep being two people who have a good time together and do dirty stuff sometimes. Does it have to be all in? All inclusive? Can't we just be, like, a la carte?"

Pamela's "dating a la carte" vision feels particularly salient in today's modern relationship landscape. With a generation reflecting on the sky-high divorce rates of their parents, rejecting the formerly icon-clad links between sex and commitment, and investigating the possibility of open relationships, the standard relationship model can not only seem inaccurate, but undesirable.

More importantly, we're already living the alternatives. So many of us slip into label-less relationships without so much as a "What are we?" conversation, occupying unidentified spaces between "hookup" and "relationship" for indefinite amounts of time.

Yes, there are those 20-somethings who prefer (and have) something more traditional, someone they can commit to for sex, love, dating and all the rest. But there are plenty of people, particularly those in ambiguous relationship states, who'd actually prefer to actively identify what they really want — or don't.

Picking and choosing: Beth*, 26, is one of many who's tried dating a la carte. In an on and off relationship that lasted over a year, she was hitting a lot of the standard early dating benchmarks: seeing one another exclusively, having regular sex and going out on dates. What they were decidedly not doing?

"We were not calling each other any sort of labels like 'boyfriend' or 'girlfriend,' were not introducing each other to family, not attending functions with each other as 'dates,' were not cohabiting. Only on the night before we broke up did we say 'I love you,'" Beth told Mic.

By dating a la carte, the relationship never got boring — the pair only "stayed in" twice over the course of the yearlong relationship. "He liked that we didn't have to attend each other's functions out of obligation, or sit through family things together," Beth said. "He was really enthusiastic about the fact that we got 'all the good and none of the bad' of relationships."

Such a relationship could be described as "dating partners," in which the pair actively dated but didn't take on formal responsibilities to one another. For other a la carte daters, the idea of frequent sex might have appeal but strict monogamy doesn't. Or perhaps an emotional connection that interests you, but you want to stop just short of a "girlfriend" or "boyfriend" labels. The whole point of a la carte? You get just the elements you want.

Getting your needs met: The benefits of dating a la carte are rooted in recognizing that one person might not meet all your needs, something described by sex advice columnist Dan Savage as being "good, giving and game" (GGG). If we can't meet all our partners sexual needs, he argued, we need to be open to letting them meet them elsewhere.

New York magazine's Maureen O'Connor explored this concept under the banner of the "Voltron Theory of Casual Dating," by which a casual dater can date a number of people with different personalities and strengths at once in order to cobble together the fulfillment of all her needs. "Dating is, at times, a reactionary enterprise — after finding a deficit in one romantic prospect, you react by seeking his foil as a sort of counterpoint," O'Connor wrote.

But dating a la carte doesn't always mean dating an assortment of people simultaneously — it can just mean one relationship that includes certain desirable elements but leaves out the rest.

"I'm dating someone who I love and have great sex with, but I don't actually have the desire to settle down, get married or commit to him. I'm too afraid of how that would corrupt us," Rhiannon, 28, told Mic. "We're happy now. Why put another variable like living together in the mix?"

In other words, there's nothing wrong with being, as Pamela defined her relationship in Louie, a "whatevery couple sex thing."

What gets left out of that "whatevery" status? Any appetizer that looks unappealing. Meanwhile, the dishes that look most delicious get to stay — until, perhaps, the main entree is the thing that seems most appealing of all.

*Names have been changed to allow subject to speak freely on private matters.