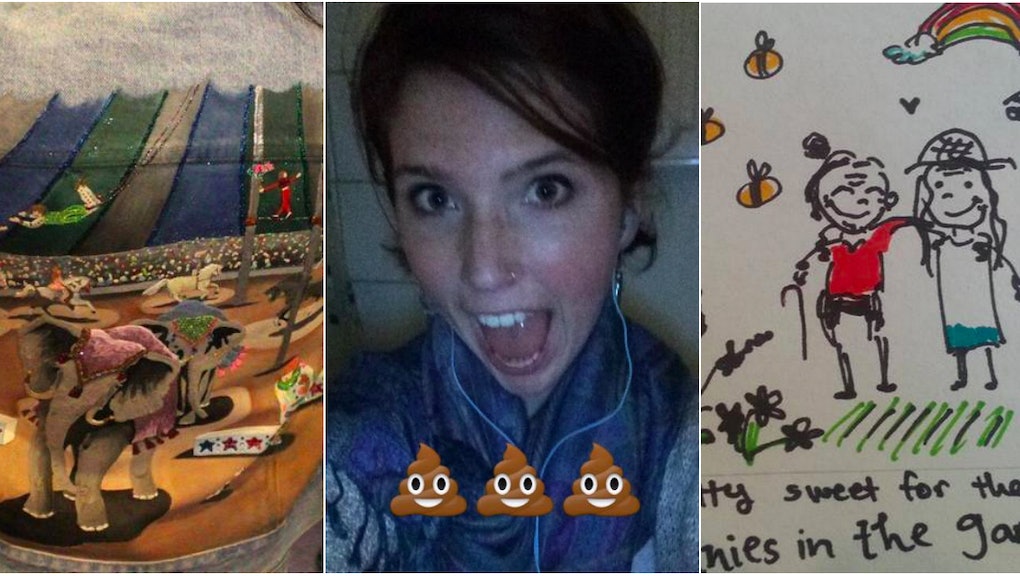 Gone are the days when Rachel, Monica and Phoebe lived in the same city for 10 years without even changing apartments. Now, jobs, partners and the desire for adventure mean that friends often don't stay in one city for long. Young adults accounted for 43% of all movers between 2007 and 2012, according to the U.S. Census Bureau.

That means, unsurprisingly, that 83% of us have long-distance friendships, according to a 2014 study by Erin Sahlstein, and an average of 10 at a time.

Staying close with a friend who lives 3,000 miles away isn't easy, and Skype and Facebook messages are only so fulfilling. But any LDFs worth their data overages know that a few clever, cool and downright silly ideas keep the connection going strong — even if your phone signal is hit-or-miss. It only takes a bit of creativity to stay closer than ever.

Here's how some besties are doing it:

"My best pen pal and I create a collaborative comic back and forth."

When Emily and her friend Elaine graduated from college last spring, they made a promise to be pen pals. The last time they saw each other in person, they joked about buying a farm together once they're old. Emily included the start of a comic in her next letter. Now "Grannies in the Garden" has the first of what will hopefully many installments, based on Emily's story and Elaine's drawings.

"In 'Grannies in the Garden' we have wildflowers and chickens, and we dabble in beekeeping, cooking and more," Emily told Mic. "It's been a great way to keep in touch, but also to do something fun and creative as a break from our jobs and responsibilities."

"We text each other the word 'wub' to indicate that we're thinking of each other."

College senior Emma has stayed in touch with her friend of four and a half years often relying on a single word.

"As far as I can remember, she just said 'wub' one day at me, I asked her what it meant, and she said something like, 'It's a sound that indicates existence,'" Emma told Mic. "We just started using it that way. It creates something akin to the 'existing in the same space without necessarily talking to each other' feeling that non-long-distance friends can have."

That's meant 3,945 "wubs" in total in their Facebook messages alone, including 104 in the last week. Turns out you don't need to say a lot to keep the connection going strong.

"We Snapchat each other on the toilet."

Emma, a college student in Los Angeles, and her friend stay in touch via bathroom Snapchats. "That's literally all we do to communicate," she told Mic, bravely sharing the above photo as proof. (There are friends who stay close by sharing more typical, non-toilet selfies, too.)

"We have a notebook that we send to each other with letters, drawings and little collages in it."

When California college student Izzy made close friends during a summer abroad in Germany, the new group decided texts and calls wouldn't be enough to maintain the connection across time zones. So they decided to start a journal.

"We're all from really different parts of the world, so it takes forever to get around — literally from Australia to South Africa to Mexico to the U.S. to Europe and back again — so we write tons to make it really worth it," Izzy told Mic. "Someone actually glued in a map of all of our hometowns and tried to calculate a place in the exact middle for us all to meet up again, but I think it ended up being in an ocean."

The book keeps them accountable for tending the connection in a way their Facebook group can't, since there's an established order to the system, Izzy said. Plus, "actually holding a tangible, physical representation of your friendship in your hands is a really powerful feeling ... it's old-fashioned, but it solves the problem of time zones!"

You don't need to be a true graphic artist to get creative — just take it from college student Alexa. "No one is good at drawing on a tiny touch pad, so back-and-forth bad drawing is pretty fun," Alexa told Mic, "especially to illustrate particularly ridiculous conversations."

"My three best friends from high school and I have a 'traveling jacket.'"

It may not be a pair of magical pants that fit everyone, but Helen and her friends have a denim jacket painted with an elaborate circus and covered in rhinestones and glitter. (Beat that, Blake Lively.)

The jacket, purchased in the friends' sophomore year of high school, is still being circulated between their respective college campuses four years later. Each time it moves, they include a letter updating everyone else on their lives.

"We saw it and it was just the most ridiculous item of clothing we had ever laid eyes on, and so of course we had to get it," Helen told Mic. "The decorations don't really have any significance other than the fact that they're completely over-the-top, so whenever we wear the jacket we try to do something daring and fun in the spirit of continuing its streak of ridiculousness."

"My sister and I keep a journal when we travel in the form of letters to the other person."

Tianna is a college student currently abroad in Denmark. To feel close to her sister without the hassle of sending postcards or buying souvenirs, she keeps a journal filled with "letters" to her. "We keep writing in [the journal] up until the end, and when we go home, it's a present," Tianna told Mic.

"[Our postcards have] this fantastic penmanship that always makes me miss her even more."

After Kate and her friend Stephanie moved apart post-college, they found that they weren't up to the effort to text or call as often as much as they expected. So they started sending postcards, each with a photo that reminds one of the other. For Kate, Stephanie sends New Yorker covers or Toni Morrison quotes; for Stephanie, Kate's favorite was of a female weightlifter, a reference to Stephanie's athletic side.

"The thing about postcards is that they feel more permanent than texts or emails," Kate said. "They also feel inherently more generous. It takes time to buy the card, write on it and find a stamp. It tells someone that you made the effort for them. And that you don't necessarily need a reply, you were just thinking of them."

She added, "That kind of acknowledgment transcends time and distance ... It's a decision to re-commit to [our friendship] every time we lick a stamp." Plus, she said, Stephanie's penmanship "makes emojis look like primitive art."

"We both make the same recipe each week."

Rebecca and her best friend from high school, Ilana, haven't lived in the same location since they graduated from college in 2011. "Being apart forced us to make a really active decision to keep each other in our lives," Rebecca told Mic.

So they started a cooking club for two, where they each had to cook the same complicated recipe each week and recording the results (and poking fun at each other's execution) on a private Tumblr. They would also eat the food with other people, "like we were throwing a dinner party together," said Rebecca.

"Our goal with it was to make weird things, not things we would normally make, [like] pumpkin gnocchi in the fall with special brown butter," Rebecca said. "It was a good way to be present and playing an active role in each other's lives." The Tumblr project helped the friendship immensely: Rebecca and Ilana still don't go a day without talking.

"I made a Long-Distance Jar with one thought on a piece of paper for every day apart."

Long-distance romances are long-distance friendships, too. Amy, a new graduate working in theater in Los Angeles, told Mic that one of her favorite ways to feel close to her long-distance boyfriend of two years is to remind herself of the next time they'll be close. The jar, she said, is filled with one slip of paper a day "until the date of my flight to visit him."

After all, the best part of any long distance relationship is the moment when the distance finally disappears. As much as we love our long-distance strategies to keep in touch, there's nothing quite as good as seeing each other in real life after months apart. Absence really can make the heart grow fonder.