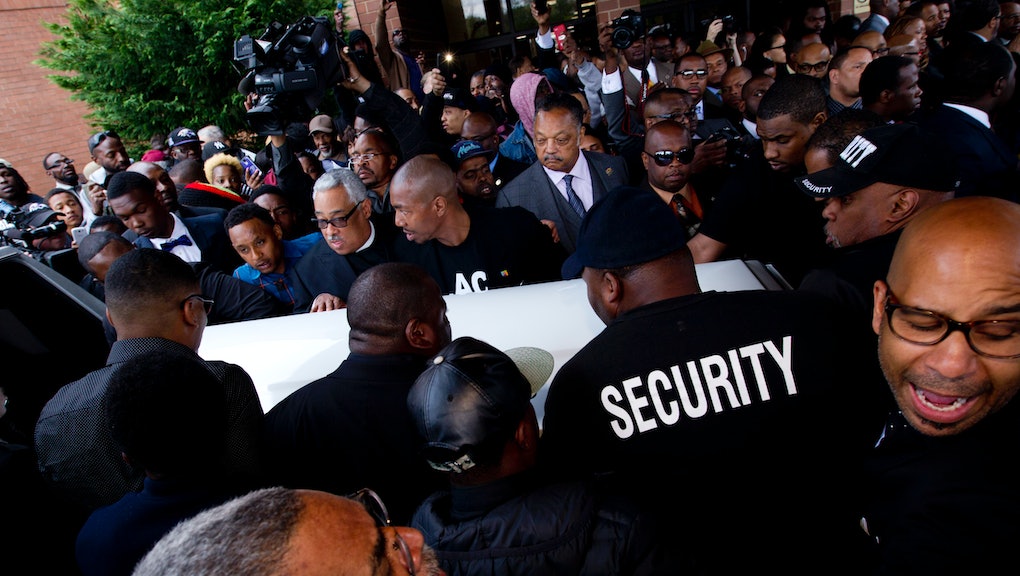 Late Wednesday, sources in the Baltimore Police Department leaked a report to the Washington Post suggesting that Freddie Gray, the 25-year-old who emerged from 45 minutes in custody following his April 12 arrest with catastrophic damage to his spinal cord, had been "banging against the walls" of a police van, "intentionally trying to injure himself."

This information came from a fellow suspect, who had been riding in the same vehicle for the final few minutes of its journey to a city booking center.

The Post story landed less than 24 hours before details of the department's preliminary investigation into what killed Gray were revealed by WJLA. Those findings, coupled with details from a medical examiners' report, led investigators to the conclusion that Gray's neck was broken as it struck a bolt in the back of the police wagon at an unknown point during the drive.

The internal reports have been handed over to the Maryland state's attorney's office, which has taken over the investigation. But the message to the public is clear. Baltimore police have laid out a narrative which holds that, rather being the victim of officer brutality, Gray's fatal injuries were self-inflicted: He broke his own neck and the officers responsible for his transport were simply unlucky, driving the wrong van at the wrong time, with a clearly wrong-minded and irrational man in their custody.

The family reacts: Jason Downs, an attorney for the Gray family, responded to the leak with disdain.

"We disagree with any implication that Freddie Gray severed his own spinal cord," he told the Post. "We question the accuracy of the police reports we've seen thus far, including the police report that says Mr. Gray was arrested without force or incident," referring to previously disseminated accounts.

Aside from bits of confounding and questionable information, Baltimore police officials have provided few facts about what killed Gray. Most of what we knew before Wednesday came from bystanders' videos showing two officers loading him into a low white van. Gray is heard moaning, clearly in pain, but conscious and apparently able to step up into the vehicle. By the time the wagon arrived at a city booking center, he was unresponsive.

For nearly three weeks, the details of what exactly happened during that drive have remained inscrutable. Officers said Gray was "acting irate," so they paused once to shackle his legs. (He was not wearing a seat belt, which is a violation of department rules.) They pulled over a second time "to deal with Mr. Gray" and then again to load another suspect. In between the first two, police revealed Thursday morning, there was a mystery stop.

Simple math tells us that someone here is not telling the truth. As a result, the narrative will splinter and the people who killed Gray will benefit from the confusion. For prosecutors tasked with assessing who, if anyone, to charge in his death, the leak creates new and potentially impassable barriers.

Same old story: "This is not new," President Barack Obama said during a White House press conference on Tuesday. "And we shouldn't pretend it's new."

Obama was responding to a question about the role of the police in Gray's death and the protests and rioting that swept through the city Monday afternoon and evening. But his observation has legs — what happened to Gray now fits comfortably into an increasingly familiar story.

A young black male living in a community policed by mostly white officers, Gray was confronted on dubious grounds and ended up dead. For another police victim, Missouri teen Michael Brown, shot and killed by Officer Darren Wilson last summer, the deadly encounter lasted just a few minutes. The campaign to smear Brown's character and cast doubt on any witness account deemed unfriendly to his killer's narrative was carried on vigorously, with an assortment of timely leaks, throughout a months-long grand jury probe.

Wilson, now retired from the force, was not charged by the state and a subsequent federal civil rights investigation failed to yield a case.

In Baltimore, the final chapters of Freddie Gray's story remain unwritten. The state's attorney's office could deliver an indictment against any number of officers suspected of causing or taking part in the potential abuses leading to Gray's death. Or it could, as so many others have, fall back in the face of a carefully constructed wall of silence, doubt and innuendo.

With every leak, each anonymous account, we move further from the truth and the justice a community so desperately needs.