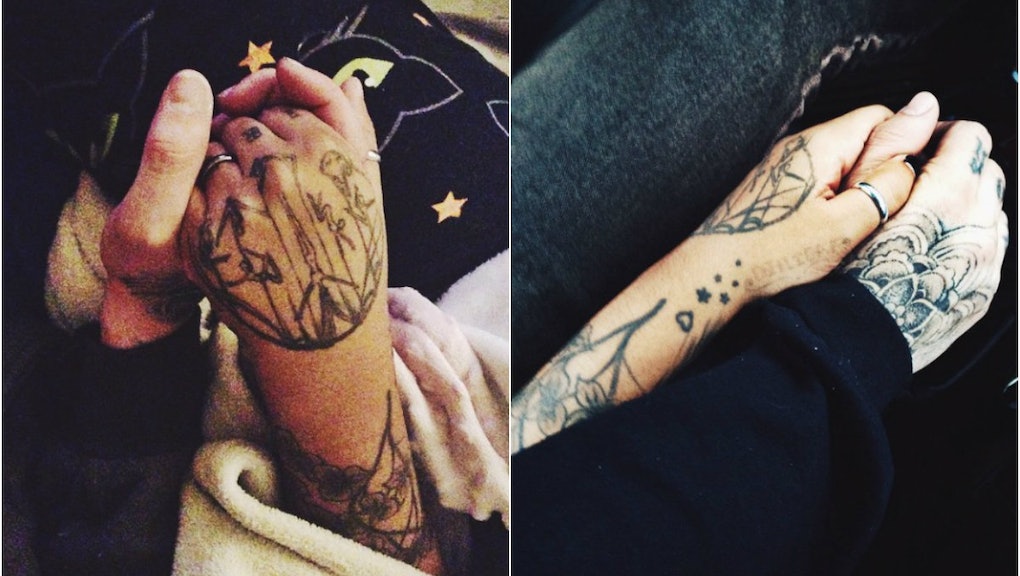 There's One Beautiful Benefit to Having Tattoos We Often Overlook

Posted in a photo on Mariela and Tiago Silvas' joint Instagram account is a quote: "Tattoos are the stories in your heart, written on your skin."

For the Silvas, tattoos are also what brought them together. Mariela, a photographer, and Tiago, a finishing carpenter, met online, but not through the typical platforms like Tinder or OkCupid. Instead, they found each other through the little-known dating website Tattoo Dating Site.

Why did each of them get so specific in their search? "Tattoos are a big part of my life," Mariela told Mic. "I've always seen myself covered in them." Back in February 2012, Mariela had become bored in her neighborhood of Rego Park, Queens, and was looking to make friends who shared in that same specific interest. "It's not important in my choice of partner, but it is preferable."

For Tiago, tattoos had always been a part of his identity. "Since an early age I always loved tattoos and my objective is to end up with 80% of my body tattooed," he explained to Mic.

Naturally, the two were drawn to each other. By their second date, Mariela and Tiago took a plunge and got some ink together. "We got together to hang out and go to Tiago's rib tattoo session, which he hasn't finished yet. I decided to randomly get a tattoo that same day because I love them." Mariela told Mic she got a tattoo of an eye on her arm. "[It] reminds me a lot of that day."

The two fell fast in love and soon married. They are now raising their first child together.

"It was exciting," Mariela said of the fateful day she met Tiago. "Like, finally I found someone passionate about tattoos like me ... that doesn't have a problem with it."

Connecting members of the same "tribe": For both the Silvas, seeing someone with a tattoo signified that behind the ink lies a person with interesting stories about themselves or their lives. The two joke that they don't love every single one of each other's tattoos, but that it's besides the point. The tattoos reflect the kinds of qualities that they each view as important.

It's not a surprise that tattoos can be a unifying force for singles looking for partners — tattoos have historically been a tribal symbol. "They tended to be a collective cultural project, constituting particular social markers," Jake Wallis Simons wrote for CNN in September.

Today, having tattoos is more common than ever. A poll conducted by Pew Research Center found that nearly 4 in 10 millennials have a tattoo, and about 50% of those inked individuals have two or more tats. But that group is also more individualized, with different connotations for those who have them. As Nicholas Thomas, director of the Museum of Archaeology and Anthropology at Cambridge University, told CNN, "Body art is becoming the opposite of conformity, a sort of badge of travel, or internationalism. People visit places and make them parts of themselves, so that they will forever bear marks of their unique visit."

For plenty of tatted people, those skin adornments aren't just decorative. They embody certain values and personality quirks that make those people tick: creativity, confidence and risk-taking. As a recent study found, tattoos on men can signify identity, dominance and attractiveness — a quick way to assess personality and character quality in a large dating pool.

Tattoos also serve as a unique icebreaker. One 2013 study published in the Archives of Sexual Behavior found that men are much more likely to approach tattooed women on a beach than their non-inked counterparts. It's not uncommon for tattooed people to hear "Hey, nice tat!" and "What's the story behind that?"

Beautiful emblems of a relationship: It was five years ago that Justyna Rubuls started thinking about fixing a tattoo, a small lizard on her shoulder that was the result of a spontaneous decision long ago. She had never been fond of it, so two of her friends recommended a local artist, Eugene, to cover it up.

The only thing Justyna remembered from their first consultation was Eugene's professionalism — and his amazing green eyes.

"A few weeks and few more consultations later, my tattoo was covered up with beautiful orchids,"Justyna told Mic. "About a week after the tattoo session [ended], we started texting. Then texting more and more. We finally decided to meet. ... At first it was very casual but very soon we realized that we were just perfect for each other."

Since then, Justyna has sat for more than 100 hours with Eugene, now her husband, creating an emblem of their relationship on her body: A wildlife tattoo that spans her entire right side. The tattoo speaks to their shared values. "We admire the beauty and variety of flora and fauna, and since we're both vegans and have a great respect for nature, the wildlife subject was more than obvious," Justyna said.

Justyna now works alongside Eugene as a tattoo artist. Their relationship has led her to a new career path she probably wouldn't have found without getting that tattoo from her now-husband.

Tattoos as a gateway to connection: Tattoos aren't just a way to spot a cool person from across the room (although they are that, too). For Mariela and Tiago, Eugene and Justyna and countless other couples, tattoos go beyond the surface symbolism and counterculture style they represent.

For the mutually inked, they're a gateway to understanding and an indication of shared values. They also indicate a person who's open and ready to share something of themselves.

"All my tattoos have a meaning behind them," Noah Michelson, the Huffington Post's Gay Voices editor and tattoo enthusiast, told Frontiers Media. "I felt, as a queer person, I had so many stories inside of me that for so much of my life I was ashamed of. To be able to take emblems of those things and put them on my body, where they were visible to the outside world, it was almost like bloodletting in a way. It was a way of getting things off my chest by putting things on my chest."

With that sort of openness, it's no surprise people with tattoos are drawn to one another.

Tattoos, after all, aren't that different from love. They take time, can be painful and are ultimately a big commitment. But they're something you do to make your life more beautiful, to share with someone else.