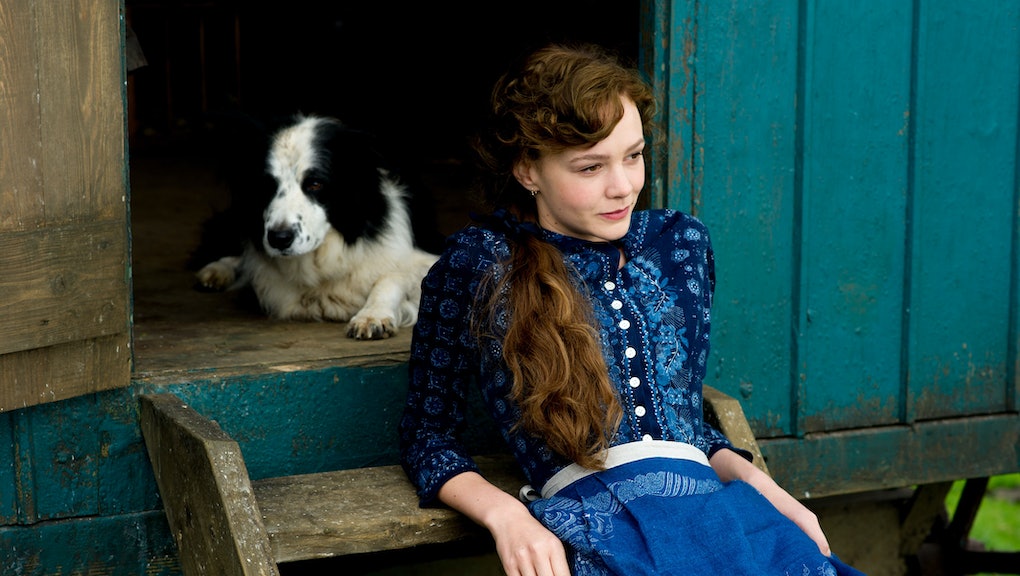 The last place you'd expect to be reminded of The Hunger Games is in the adaptation of the 1874 English novel by Thomas Hardy. Yet from the first time we hear Bathsheba Everdene (Carey Mulligan)'s name in Far From the Madding Crowd, the Girl on Fire springs to mind. How could she not? Their names might be spelled differently, but they sound just the same.

Yet that's not the only way Bathsheba evokes Katniss. More significantly, the two protagonists share a burning feminist spirit — one that's refreshing to see in an English period piece like Madding.

There will be spoilers for Far From the Madding Crowd in this piece, though nothing the 141-year-old book hasn't already spoiled for you.

Everdeen and Everdene have little time for considering the men in their lives. One is fighting to keep herself alive, while the other inherits her uncle's farm and must prove herself worthy of running it as a woman. That doesn't stop suitors from constantly attempting to court them. Yet just like Katniss, Bathsheba is simply #TeamBathsheba.

"I'd hate to be some man's property," Mulligan's character says when she's proposed to the first time by a farmhand named Gabriel Oak (Matthias Schoenaerts). She'll hear four more proposals throughout the film, and her reaction shifts slowly to each. At no point, however, does she see marriage as necessary — a wild thought for a woman in her time and place.

Bathsheba is a competent manager of her farm, and she isn't driven wild by ambition. Her second suitor, William Boldwood (a fantastic Michael Sheen), sells her on the idea of marriage not as an act of love, but as a way to expand her estate. She's quite happy with what she has, though, and she's focused on making that successful.

She doesn't choose a man because she needs to get married; she chooses Troy because she's lonely, and she feels passionately about him. Unfortunately, it turns out to be a mistake. Troy is a drunk and a gambler who puts the success of her farm at risk. That's fine, though: Acting on a feeling and being wrong doesn't make Bathsheba any less good. She made a mistake in the pursuit of love.

Compare that to Katniss, who has little use for love. Her relationship with Peeta during the Hunger Games isn't a romance, but a play for survival. She never fully lets Gale in because he's not of any practical use to her. It's not cold; it's the choice of a woman literally facing death. When she finally does choose a suitor at the end of Mockingjay, it plays less as choosing a team and more as a natural progression of events.

Bathsheba and Katniss share both a name and a burning feminist spirit.

When Bathsheba finally chooses the man she loves, it's not a surprise. In fact, you can tell early on who she's going to wind up with. It's not meant to be surprising: Like Katniss, she falls for the person who was her closest ally and friend all along. She chooses her Peeta.

Of course, Far From the Madding Crowd isn't life or death like the Hunger Games. The movie is light, but anchored by strong performances and breathtaking visuals. It's a gorgeously shot movie, filmed in sumptuous color. There's even a scene where Mulligan gets to exercise her vocal chops. There's much to recommend seeing it this weekend, especially if you're suffering superhero fatigue.

The odds aren't in Bathsheba Everdene's favor. She's a woman fighting to be independent at a time when she's constantly told she should settle down with a man. Her determination and fortitude make her a unique character for her genre, and one that period films could use more of. Far From the Madding Crowd dares to say that love can still win out, but it's more complicated than just saying yes to a marriage proposal. That's what makes it a gem.