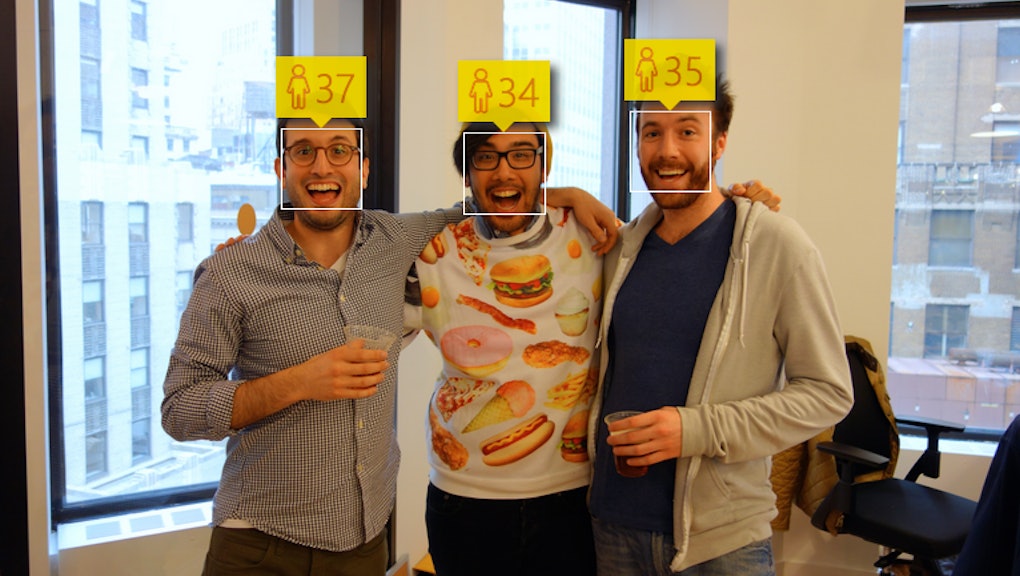 Can This Face-Detection Software Accurately Guess How Old You Are?

Hey, bored office drones! Want to play a fun game on the Internet that also sends Microsoft your face? You're in luck: Enter how-old.net, a nifty piece of facial-recognition software that tries to guess your age. How-Old exploded in popularity on Twitter on Thursday, forcing hundreds of 25-year-olds to confront their worst fear — that they look 40. Or worse, 15.

Upload a photo and Microsoft employs its "state-of-the-art cloud-based face algorithms" to give you a result like this:

That's me on the left; I'm actually 27. Gabe and Miles are, I'll just say, much younger than the age Microsoft assigned them.

But it's not the accuracy of How-Old that's appealing. The most sharable results are, of course, wildly off.

It's a silly tool, and we're all a bunch of narcissists. We're obsessed with how we're perceived by others, as we discovered when the dancing-avatar app MyIdol went viral. Sharing your computer-determined facial analysis is partly a way to ask for validation: "Do I really look like this?"

It's also a way for us to demonstrate our superiority over machines. How-Old is confirmation that artificial intelligence hasn't yet surpassed human abilities. Most people can semi-accurately determine age from just a quick glance; at the least, we can tell the difference between 25 and 50. And we know, because we're human, that Jared Leto is a few years over 40, no matter how much Joker makeup he has on.

So congrats, we've outsmarted the computer. But maybe we should still feel a little uncomfortable: We're careening toward a future in which facial recognition is the norm, in which Minority Report-style APIs that demand some personal info and guess the rest of it could be commonplace in our everyday lives, not just on the Internet. That'll really be something worth tweeting about.